Share All sharing options for: Predict Boise State's starting lineup for the season opener against Georgia

In what has become an annual tradition here on OBNUG, Drew and I have matched wits for a roundtable discussion of Boise State's starting lineup for the Broncos' opening game. A brief history lesson: Drew is always right, I am always wrong, and there will be at least one joke about Brad Elkin that goes to far. Sound like fun? Then let's get to it.

The starting lineup discussion is after the jump. Feel free to add your two cents in the comments.

In the history of predicting Boise State's opening game depth chart, I have been terrible. I mean really, really terrible. Like Mike Locksley levels of terribleness. I blame myself, if only because I cannot think of anyone else to blame. Spiders, maybe. They don't take the fall for enough things. Fact is I'm just too much of a free spirit when it comes to reading the tea leaves the way they should be read or speculating based on fact and science and history and not which players think which ways about a Whole Foods in Boise. Not a fan of salad-by-the-ounce and flax bagels? To the bench! 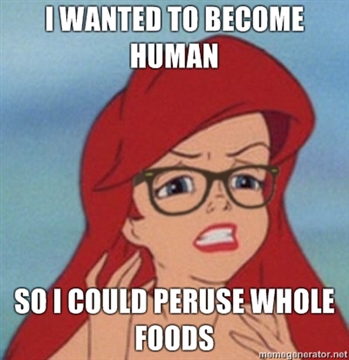 While I'm busy weighing my "feelings" and my "hunches," Drew is basing decisions on his intellect and intuition. He is the IBM Watson computer to my Leapster, the Ken Jennings to my Larry the Cable Guy.

With self-defeat at the front of my mind, let me begin this roster prediction with a bold assertion that I base on my mood as I'm writing it: Jake Broyles will not be the opening day starter at guard. The fast-rising sophomore has been running with the ones all of spring practice, but I am not falling for that ruse. I know what a first-teamer in spring means. My money is on The Neckroll, Mr. Faraji Wright, to supplant Broyles sometime between April and August.

If you like that prediction, there's more where it came from. But first, I want to feed this pick into the Scantron of roster predicting. Drew, tell me if I got Broyles pegged right or wrong.

So, what...we're doing the depth chart predictions now one position at a time? Will we be done by June of 2035, because I think that's about when I should start getting those routine prostate exams. And let me also add that I fully support your "blame the spiders" initiative. I hate small creeping things (which might account for my disdain for Chris Ault). 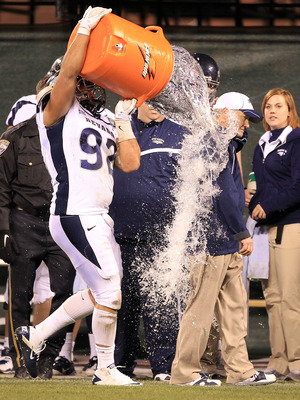 Now that the initial pleasantries are out of the way, let me give you a hearty pat on the back. I believe that your hunch on Jake Broyles was correct and you're well on your way to becoming a Jedi.

I'm sure that Broyles is coming along nicely, and I'm as stoked as anyone to see plenty of depth in the trenches...but I think the effusive praise for Broyles has some people jumping the gun. I would liken the Spring Broyles-love (also the name of our annual company picnic) to the Spring Goodale-love, which is to say, entirely based upon "improvement." I can't help but recall stories from last year's camp that involved Broyles being made a fool by Shea McClellin. To be fair, I also recall Chris Petersen proclaiming Broyles a "terror" in mop-up duty against Toledo. At any rate, I just don't see Broyles supplanting Hayes or Wright. Since injury news in Boise, Idaho, is guarded more closely than the Declaration of Independence (look out! it's Nic Cage!), I suspect that Broyles' newfound slot on the first team is due, in part, to one or two injuries. They say that Hayes will be getting good reps with the "ones" to round out Spring ball, but I suspect that Wright will take command early in Fall camp and never relinquish it.

Oh...one more thing about the O-line: Wasn't Michael Ames a starter at one point in time or was that an elaborate daydream?

Yes, Ames was the nobody whom Bruce Feldman prophesied about prior to the 2009 season. BroncoSports.com claims he started eight games that year. I think Ames may have written his own bio because I do not remember it that way.

It's funny that you and I both have unfailing non-belief in Jake Broyles starting at guard and yet we have no qualms about Charles Leno starting at tackle (I am taking the liberty of speaking for both me and you at this point). What is our deal? Is Leno that much more of a sure thing than Broyles? Are we vision-impaired bigots who hate Broyles because of his specs? If we should be picking anyone to fail, it should be Leno since he is being pushed by quality former starters in the aforementioned Ames and the Clady-clone Brenel Myers. We may have to soften our stance, let love in, and re-think this one.

Thanks...I thought I had just imagined Ames like Godfather 3 or a game in Reno last year.

And I have to say, for the first time in recorded human history, the Idaho Statesman may have me rethinking my position re: Broyles a little bit. Of course, it wasn't the Statesman's persuasive arguments, but rather some of the quotes from Chris Petersen. We don't have THAT much depth at right guard, and the more I read about Pete's impressions on Broyles even into last year, I can't help but think "maybe the kid's got a chance." I'm going to say that at this point our right tackle and right guard at the end of Spring have an equal shot of starting. That is to say, Leno and Broyles will both start, or neither will ,come opening game. Consider the matter re-thunk.

Can't the Statesman just go back to doing what it does best: "Get Fuzzy" comics? They are really throwing a wrench into this roundtable.

I, for one, am going to stick with Faraji Wright as my opening day starter at right guard because a) he has a neckroll and b) I don't mind being wrong. Charles Leno can stay in the starting lineup. I'll allow it.

Now onto more pressing matters of which I have no clue: wide receivers. Is it really possible that Chris Potter will start at slot receiver over Kirby Moore? And what about nickelback? Hunter White over Dextrell Simmons? I am not emotionally ready to talk about these positions yet.

Thankfully, some of the open spots have been signed, sealed, and Tupperware burped. Tyrone Crawford will start at defensive end, according to me. Jerrell Gavins will start at corner, sources (me) say. Geraldo Hiwat and Tyler Shoemaker will be WRs No. 1 and No. 2, as per me.

The way I see it, the only truly open spots this fall will be slot receiver, nickel, the right side of the O-line, and strong safety. Do you see it the same way?

I think it entirely possible that Kirby Moore gets the start over Chris Potter for no reason other than the fact that Kellen is liable to throw an old-fashioned temper tantrum if he doesn't. There will be wailing, gnashing of teeth, and someone is bound to get the dreaded stink eye. Blood is thicker than Gatorade after all, and this is Kellen's team. 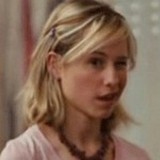 The Mona Lisa of stink eyes.

Ultimately, I think the Potter/Moore situation will be diplomatically resolved by applying the dreaded "OR" tag to the roster spot, rendering the "starter" label somewhat arbitrary. Brent Pease is Swiss, isn't he?

Frankly, I'd rather not talk about Nickelback, or their milquetoast brand of Canadian alt/rock. In fact, just so there is no confusion, let's refer to the aforementioned defensive position as "Venable." I think Hunter White, Dextrell Simmons, or Jonathan Brown can and will play Venable this year, with playing time increasing as the season wears on for the most effective. Safe to say that White has the most intimate knowledge of the Bronco defensive schemes and Jonathan Brown is probably most athletic. Dextrell Simmons has the "Venable factor" at Venable (thick body, eagerness to dismantle offensive personnel). Looks like it'll be an interesting Fall.

How about we call the position Powerable - an ode to Ellis Powers and Venable. In fact, every offseason we can add parts of the new starter's name. Powerablite? Powerablemons? This could get confusing ... or awesome ... but probably confusing.

OK, sounds to me like we just about have this depth chart thing figured out. Here is how my starting lineup for the Georgia game will look. My Facebook friends are in bold.

I can't argue with your depth chart as it now stands, but I'm definitely placing my "OR" tags on the slot receiver position and can't bring myself to give the punting duties to Elkin after Trevor Harman kicked the ZOMG GREATEST PUNT IN HUMAN HISTORY!!!

My depth chart (much deeper than yours, I must say) is below. And Byron Hout is your Facebook friend? Can you tell him to accept my Farmville request?

Who will be in your starting lineup when the Broncos play the Bulldogs? Are you buying into the Jake Broyles hype? Do you prefer Dextrell Simmons or Hunter White? Should spiders get more blame? Share your thoughts in the comments.