Saturday is Bronco Nation's last chance to fill up on Boise State football until August, which is about three years from now in football fan time. Cherish those moments. The 2010 season-in-review DVD can only get you so far. I know. I've been there already.

To make the most of your viewing time on Saturday, I have put together a list of the ten players who deserve some extra attention. Some are new starters in new roles, some are up-and-coming future stars, one is a kicker for some reason. Check out the list after the jump, and add your favorite player to watch in the comments.

The Idaho Statesman profiled Broyles as a terrifying player with a mean, ornery streak. So I better see him stab someone with a trident. 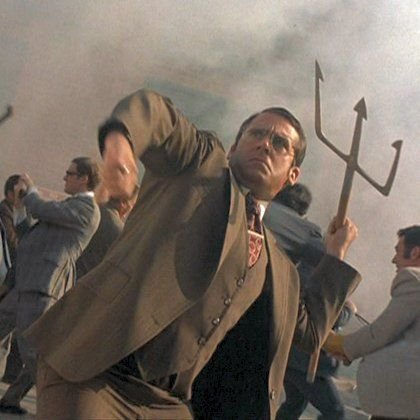 Gavins was a fan favorite last year for his hair, his occasional brilliance at the nickel spot, and his being close, personal friends with several OBNUG readers. We are nothing if not petty! How much has changed this offseason? Well, he is now hairless, he is now a starting corner, and he is not looking forward to the movie Fast Five nearly as much as I thought he would. We are drifting apart.

Background: Ioane is from Hawaii, and he may very well knock someone out this year just by looking at them. Could happen Saturday, in fact.

Here's a battle I had not mentally prepared for: Chris Potter vs. Kirby Moore for the starting slot receiver. I guess I figured that Moore would have the job as some sort of birthright or due to the fact that he and the starting quarterback came from the same womb. I wonder if Potter feels guilty that he's ruining Mama Moore's happiness.

Smith is expected to be starting at first-team linebacker on Saturday, thanks to the injury absences of Byron Hout and Aaron Tevis. How good is Tommy Smith? Supposedly a lot better than he was last year, which could bode well for the linebacker line changes that the Broncos love to employ.

Saturday will be Bronco Nation's first chance to see Dextrell Simmons live and in person and tearing it up at the nickel spot. Try not to stare. Better yet, take a picture. It will last longer. Actually, don't take a picture. The Boise State athletic office will prosecute you.

Somebody has to back up Doug Martin and D.J. Harper and (maybe) Jay Ajayi, and I would prefer that this somebody looks and moves in much the same way as Jarvis Hodge. Lambert has the stocky build and the downhill style, plus moves. He should get plenty of carries on Saturday.

Canadian Bacon is back from last year's suspension, and from the bits and pieces that trickle out of spring camp, he's looking good in the D-line rotation. How can you not look good with Billy Winn next to you? Small, maybe. But definitely not bad.

I had the privilege of attending the first Boise State spring scrimmage, and my impression of the kicking game was a giant fart noise. Apparently, I got things wrong because everyone claims Dan Goodale is a kicking legend and can do no wrong. Let's see how he does in front of 12,000 Bronco fans who want their seven bucks' worth and who think Goodale is Kyle Brotzman.

Fill in the blank

My list of 10 players to watch is only nine players long because a) I miscounted and b) I want you to help complete the list. What player are you most looking forward to seeing on Saturday? Whom will you be watching? What are you anxious to find out? Share your thoughts in the comments.