Who can't the Bronco defense afford to lose in 2011?

Share All sharing options for: Who can't the Bronco defense afford to lose in 2011?

Every year injuries or some other form of attrition dwindles the number of warm bodies on the Bronco sideline. A few years back, losses like these would have seriously hampered the Broncos ability to win games, but better recruitment and better depth has allowed the Broncos to successfully weather these storms of late. After the jump, Kevan and I discuss the one guy we simply cannot lose in 2011. Everyone start knocking on wood...now.

In the last couple of seasons the Broncos have had the following players out for some or all of the season and still managed to win: DJ Harper (twice), Austin Pettis, Titus Young, Tyler Shoemaker, Michael Atkinson, Ryan Winterswyk, Byron Hout, Shea McClellin, Jarrell Root, Jason Robinson, and the list goes on. That said, the Broncos will be lacking some of the depth next season on the defensive side of the ball, losing 4-year starters SS Jeron Johnson (325 tackles, 8 INTs, 3 FF) and DE Ryan Winterswyk (167 tackles, 20+ sacks) as well as 3-year starter CB Brandyn Thompson (146 tackles, 12 INTs, 1 FF) and of course 2-year standout NB Winston Venable (116 tackles, 2 INTs, 1 FF). Now, these departures will surely smart a little until the new blood gets a chance to prove their mettle...but what happens in 2011 if we do lose a key defensive player to injury or suspension? Of course, this is all a roundabout way of asking: Who can't the Bronco defense afford to lose in 2011? Kevan, since I'm a gentleman and have a very short memory, I'll let you go first this time.

I'll resist the urge to name every Bronco defender, although J.C. Percy is not going to be very happy about it.

Let me go ahead and operate on some assumptions that may or may not be true. Assumption #1: The Boise State defense does not have a star player who is so obviously above and beyond everyone else that his absence would create a void so deep and wide that no man could come close to filling it. Assumption #2: Bats aren't bugs. Assumption #3: The defensive player Boise State can least afford to lose must come from either the most valuable position or the position with the least depth.

The only problem with that is ... does the Boise State defense have a position without depth? And can a defense as completely united as Boise State's have a most valuable position? Mind blown, a peanut is neither a pea nor is it a nut, and I may have just prematurely ended the roundtable on accident.

For now, my answer is George Iloka - the secret sauce of the Boise State defense. I am not entirely sure what it is that he does, but he does it well. And perhaps more importantly, he does it better than the guy behind him, especially if that guy is Dane Turner (and not Cedric Febis who could be the starter at strong safety this fall). 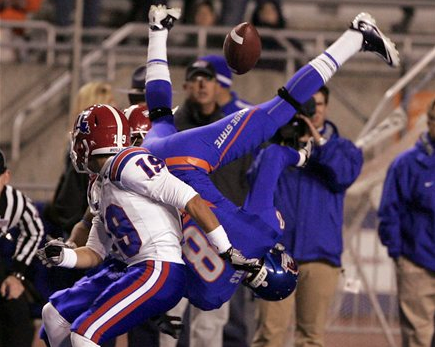 Iloka making one of his patented "inverted tackles"

Well, that's what I get for being a gentleman...and for not calling 'dibs'. I definitely would have picked Mr. Iloka for the simple fact that I honestly don't know who his backup is without looking at a roster. In the interest of prolonging this painful hypothetical exercise, however, I suppose I will have to dig deep for another answer. And here it is: Jamar Taylor.

Jamar Taylor didn't set the college football world ablaze in 2010. Heck, he only had 6 more tackles last year as a starter than he did as a role-playing true frosh in 2008...but he will bring something quite valuable to the table in 2011 that none of the backups or reserves can replicate: experience. With Brandyn Thompson's departure, one thing is assured...we will have a first time starter lining up at one of the cornerback spots this year—meaning that Taylor is now the elder statesman of the cornerback unit. I can't name many huge plays that Taylor made last year, but I certainly can't name any big screwups either—something I could've done easily with Mr. Thompson. It's that not-screwing-up ability that Taylor has that will be indispensible in 2011 because QBs are likely to key on the defender on the side of the field opposite him. Minus Taylor from the equation and we've got very short (Gavins) or very inexperienced (Makinde, Douglas...) corners flooding the field. That can't be good. 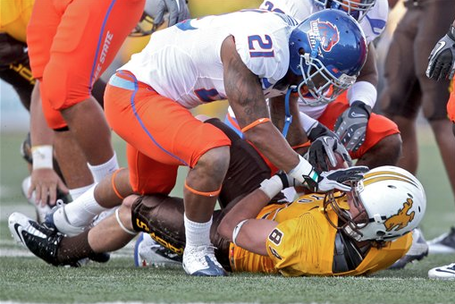 "Would you just look at this stitching?"
Kevan's response:
Always call "dibs." I learned this the hard way when I had season tickets in the general admission North End Zone.

The secondary seems like a pretty safe bet to have Boise State's most irreplaceable defender. The front seven is just too deep. The back four is just too scrutinized. I'm not sure if I speak for everyone in Bronco Nation when I say this, but I fear a defensive lapse in the secondary a hundred times more than I fear one in up front. Perhaps this is because my TV only shows me the front seven, so I have no idea what the corners and safeties are doing. Perhaps I have lingering Rishard Matthews phobias. Whatever it is, I want George Iloka (and you want Jamar Taylor) as healthy as possible. Can you blame me (you) (us)?
Drew's parting words:
Well said, the defensive line next year is going to be redonkulous and even with a lightning-striking-twice catastrophe taking out Winn and Baker, you'd still have about 600 lbs. of beef right behind them (Tjong-A-Tjoe, Atkinson), experienced backups behind them (Old Man Nisby, Greg "Grimey" Grimes), and prized recruits behind them (Worthy, Ash). There's a logjam at linebacker with only 2 open spots and I have faith that the Hout will return to form as will J.C. Tevis and Aaron Percy. The only spots where we seem thin is in the secondary and that's the only presumptive question mark on the Bronco D. We're both geniuses!
Kevan's parting words:
I like it when roundtables end that way. Huzzah!

What say you? I know it's a morbid subject, but who do you think the defense simply cannot lose in 2011? We'll do offense next week, but we're pretty sure we already know the answer.