Share All sharing options for: Saying good bye to the Idaho Vandals...hopefully

Boise State officially says good-bye to the WAC this summer, leaving behind rivalries, mismatches, and a whole lot of memories. For the next week or so, OBNUG will be bidding adieu to each and every WAC team. Today: Idaho.

We had some good times against Idaho, didn't we? Well, if you covered your ears during "rivalry week" and hummed you might've. Frankly, things have been much more enjoyable for the Broncos in this series for the last, oh...decade or so, and Boise State gaining big brother status over the Vandals during the WAC era and beyond has been a fun ride, so my glee at leaving them behind once again is tempered slightly. Very slightly.

After the jump, I reminisce about the Vandals. Feel free to add your favorite Idaho memory in the comments.

Take this number and double it and you've stumbled upon the current state of the Idaho/Boise State rivalry. Your Vandal co-worker has probably reminded you by now that the Vandals won 12 straight games over the Broncos and that success in college football is cyclical. Then, you probably did a spit take and laughed at them for a half hour.

The Vandals are no longer on equal footing with the Broncos and historically, haven't had near the success of Boise State (.43 win percentage vs. .71 win percentage). Put that in your collective pipes/bongs and smoke it, Vandals. Oh, we were supposed to focus just on the WAC era? No dice.

For me? Nothing can top the opening game beatdown that Broncos put on the Vandals in 2004. Bronco fans had to wait till kickoff to find out who the starting QB would be to begin the post-Dinwiddie era, and Zabransky and co. wasted no time dispatching the Vandals with a 21-point first quarter. My only sad memory from that day was watching a 65-0 shutout evaporate in the final 90 seconds of the game as the Bronco reserves let the Vandals off the hook by allowing a 71-yard TD scamper by Jayson "Porcelain" Bird. Nevertheless, a 65-7 win over an in-state rival is salve to the soul.

Patti Labelle and Michael McDonald, "On My Own"

Fun fact: Michael McDonald, the guy singing the crap out of the above song, goes to the same facial hair stylist as Robb Akey 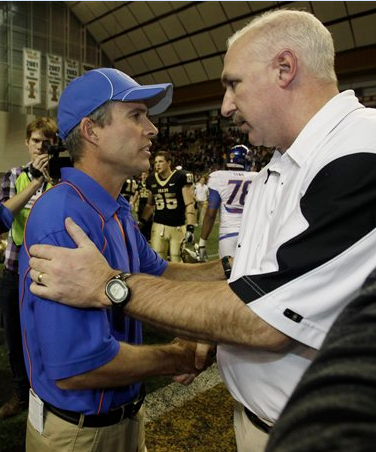 "Tell me about this 'quarterback' position, hmm?"

The Vandals have a long list of narcissistic, incompetent and loathsome coaches, but the current head man combines all three into a package so utterly ridiculous that you can't help but like him. I actually think that Robb Akey knows he's a clownish caricature and uses it to his advantage. For instance...do you really remember anything that Nick Holt said when he was in Moscow? Tom Cable? That one dude that looked like the Emperor from Star Wars? Conversely, I can think of a whole string of whoppers that Robb Akey has uttered. Here's a few gems:

“The one I can’t get off the phone is this damn AD from Florida. He keeps calling me; I don’t know what the hell he wants to talk about”

"I think they're (Boise State) just trying to get away from us. They saw the Vandals getting better. 'We better go to the Mountain West before they get too good.'

"My goal is that on Saturday night that I will be the least popular individual with every administrator within the WAC conference because we have taken the BCS hopes away from our conference,"

"We’re opening with a rematch of the most exciting bowl game in bowl-game history,"

"Hello, my name is Robb Akey."

The best part about Robb Akey is that he buys into the insular, myopic press clippings that come out of Moscow, Idaho. How else would a head coach with a .34 win percentage boast about producing the "most exciting bowl game in bowl-game history", thinks he has "an army", or call his overlords "Donkeys"? Akey is far more clown than coach...and this is so beautifully fitting for the University of Idaho that it makes me tear up a little.

November 19, 2005—Boise State was a 35-point favorite over the Steve Wichman-led Vandals, but the "Tribe from the North" came to play this particular afternoon in Boise. Jared Zabransky did not.

The Broncos held a slim 21-14 lead over the Vandals at half-time that devolved into a 21-21 tie halfway through the 3rd. A Zabransky fumble gave the Vandals the ball and the momentum back and sent Z to the bench for the day. Then, something happened: Boise State remembered they were playing the Vandals and scored 21 points on the reeling DAV in roughly two minutes time. By the time two minutes had elapsed in the 4th quarter, Boise State led the game by a score of 56-21 then eased on the brakes to win the game 70-35 (and more importantly, beat the spread).

Check out the official box score on this baby—here's the roughly 5 minute sequence that sent the all the supremely confident Vandal fans in attendance to the exits. Good times. 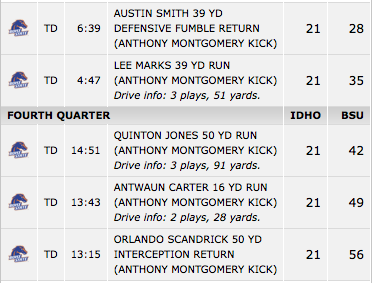 When Boise State will see the Vandals again ...

It's sadly inevitable, like the onset of winter...or incontinence.

Despite the hard feelings, the annual meeting betwixt the schools does inject a little excitement into the otherwise dull Boise State schedule. Since no true competitive rivals really materialized during the WAC era, at least we always had our ideological rivals to take a few swipes at. Both fan bases want the series to continue, and it probably shall, once Gene Bleymeier and Rob Spear decide where best to hold said game. Bob Kustra and Chris Petersen are both on record calling the miserable hellhole in Moscow a miserable hellhole, so it's Idaho that's bound to make some concessions here. After all, they want to stop the Bronco streak before it hits 20. I crack myself up sometimes.

What is your most memorable memory of Idaho? Getting a staph infection at the Kibbie Dome doesn't count. Share your thoughts in the comments.