Boise State officially says good-bye to the WAC this summer, leaving behind rivalries, mismatches, and a whole lot of memories. For the next week or so, OBNUG will be bidding adieu to each and every WAC team. Today: San Jose State.

Though you would have never guessed from the one-sided slap fight of a game last year, San Jose State was a real challenge for the Broncos on multiple occasions in the WAC. The Spartans played hard, Dick Tomey faked a heart attack at strategically opportune times, and before you knew it, San Jose State was within two scores with 15 minutes to play. Ah, those were the days.

After the jump, I reminisce about the good times between the Broncos and Spartans. Feel free to share your favorite memories in the comments.

The Broncos won their 10 games against the Spartans by an average of 32 points, a pretty incredible number when you consider that two games came down to one score. I guess beating a team by 63, 50, and 48 will kind of balance that out. Maths.

In the pantheon of Boise State WAC games, the 2004 double overtime thriller against the Spartans probably doesn't get enough credit. The game turned when Gerald Alexander blocked a game-winning field goal in the final minute of play to send the game into overtime. Jon Helmandollar's TD run in the second overtime coupled with a fourth down stop by Gabe Franklin sealed the deal and ran Boise State's winning streak to 20 games.

In 2006, the Broncos needed a last-second field goal from Anthony Montgomery to get a 23-20 win and keep the team on track for its first BCS bowl.

Runner-up to the runner-up:

Joe Cocker and Jennifer Warnes, "Up Where We Belong" 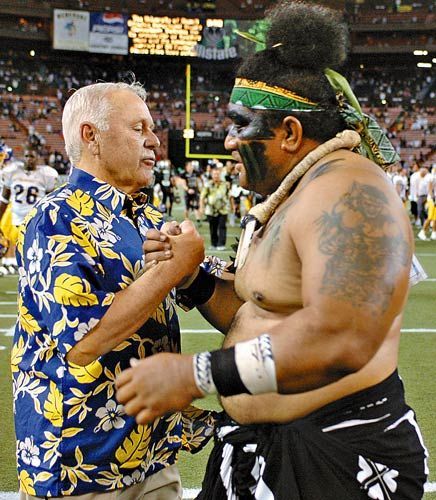 The octogenarian coach of the Spartans for five years, Tomey was one of the most enjoyable parts of Bronco-Spartan games. Without fail, cameras would always catch him in a pose that looked like he was napping - eyes half-closed, completely unaware of his surroundings, possibly mumbling to himself. It was unintentional comedy gold.

After resigning as head coach in 2009, Tomey joined the WAC Sports Network last year as a color commentator where he was given free reign to ramble about whatever was on his mind. The University of Hawaii liked what they saw enough to hire him as a special teams coach. Hope you like boring stories, Hawaii special teamers.

The Spartans had a good thing going for awhile with their 9:00 a.m. start times for home games. Teams weren't used to playing that early, Dick Tomey had already been up for five hours. It was the perfect plan. I remember waking up late in college, checking to see when the Boise State game started, and noticing that it was in the fourth quarter already. Who does that? The Big Ten at least waits until after brunch.

When Boise State will see the Spartans again ...

For reasons that aren't immediately clear to anyone at all, San Jose State is consistently named as a potential Mountain West suitor every time expansion comes up. Are people really that infatuated with a California footprint? Seems that way. So you can probably pencil in a conference road game to San Jose when the Mountain West expands to 24 teams in 2020.

What is your favorite memory of San Jose State? Share your thoughts in the comments.