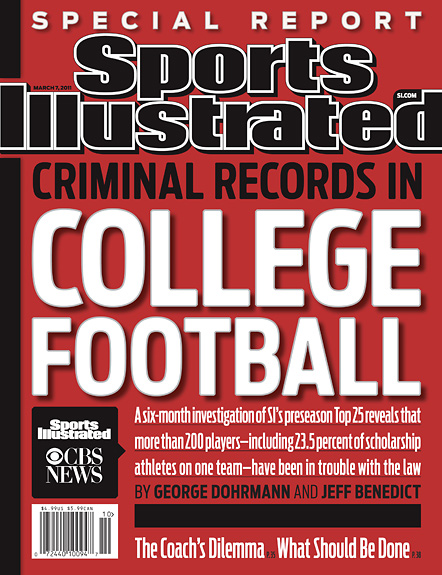 A comprehensive study by Sports Illustrated and CBS News revealed that 16 Boise State players on the 2010 roster have a criminal record. That puts the Broncos at No. 4 among preseason Top 25 teams from last fall.

The Idaho Statesman can do you one better. Boise's paper of record came up with names, dates, and offenses for each and every 2010 Boise State player who has run afoul of Idaho law. There are 18 cases of non-traffic-related crime.

All this makes for a great offseason distraction, but when the dust settles from this latest Chicken Little foofaraw, what have we learned?

And perhaps more importantly, what good did it do to revisit Boise State football players' mistakes of the past?

Some thoughts after the jump.

Almost immediately after the report hit, rational people everywhere started to wonder: Yeah, but what about context?

Good question, and one that was answered expertly by college bloggers Dr. Saturday and Spencer Hall. In a recap that does not do their stories justice, know this:

J Bates wins the day for a tempered response to the story on KBOI 2 News.

The Boise State football team is going to hell, implies everyone

It is hard not to jump to conclusions when you see the figures on Boise State's crime rate. And so people did. News broadcasts made it their lead story, the Idaho Statesman tripped over itself in haste to don its Freedom of Information Act hat (a derby with a feather), and Boise State felt obligated to issue a statement and schedule a Friday press conference for Coach Pete. Note to Max Corbet: KTVB is going to want to carry that live.

And that last point is the one you should take home with you. Crime exists at Boise State. Boise State does not tolerate it.

When players mess up, they face consequences. Boise State has an alcohol policy in place to deal with minors in possession. They have strict guidelines on felonies and other crime. Coach Pete's history with the Broncos has been above reproach when it comes to punishing offenses. Players who have messed up while with the team have paid for it, either in the public eye with suspensions or privately behind closed doors.

So why bring up all these crimes again?

The Idaho Statesman story was well researched and filled with solid reporting, but what purpose did it serve other than to one-up Boise State's report on criminal activity? Was it really necessary to point out individual players and their sins of the past?

There is a reason why Boise State keeps much of its internal roster dealings a secret: These are college kids. Their indiscretions are those of teenage and twentysomething folly. If Bronco fans are confident that the Boise State coaches and administration are dealing with matters in a fair way, then this whole matter of crime and accusations of a new Thug U are awfully premature.

What good did it do to revisit Boise State football players' mistakes?

None that I can see.

Feel free to agree-disagree in the comments.

(HT: grindhouse for the story)