Saying good bye to Utah State, one of the least despicable teams in Utah

Share All sharing options for: Saying good bye to Utah State, one of the least despicable teams in Utah

Boise State officially says good-bye to the WAC this summer, leaving behind rivalries, mismatches, and a whole lot of memories. For the next week or so, OBNUG will be bidding adieu to each and every WAC team. Today: Utah State.

We had some good times against Utah State, didn't we? Wait—am I thinking about basketball season? Well then, no...the Aggie section in our scrapbook never really took off. Admit it, there's a lot to dislike about the Aggies in January and February, but during football season, you almost kinda rooted for them. I mean, Merlin Olsen played there for goodness sakes!

After the jump, I reminisce about the Aggies. Feel free to add your favorite Utah State memory in the comments.

The Aggies' history with the Broncos goes all the way back to 1975, when they opened the series with a convincing win in Bronco Stadium. The Aggies have played Boise State 16 times since then, winning just three more times—the last—over a Houston Nutt-led squad in 1997. Tough, tough sledding for the Aggies after that.

For us, or them? The Aggies closest game with the Broncos in WAC play was in 2005—their first year of WAC play and a year that is now remembered as the "bad year" for the Broncos. Nevertheless, the Broncos pulled away to win 45-21 after a slow start. The Broncos trailed briefly in the contest and surrendered 19 first downs to the Aggies. /shudder

Can't get enough "Careless Whisper"? You're in luck. 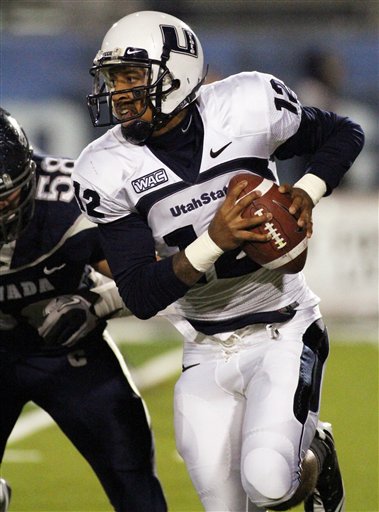 I swear that the Aggies had a "promising" QB named Charles Nelson Riley at some point. Was that a dream?

When Diondre Borel came on the scene in 2008, he was basically being hailed as the Aggies own version of Colin Kaepernick and was said to deliver more "oohs and aahs" than a Bobby McFerrin song. He had single-handedly beaten Hawaii the week before coming to Bronco Stadium, and with the '07 Kaepernick debacle fresh in people's minds—they began to worry. Borel proceeded to go 3 for 8 against the Broncos and put up a whopping 47 yards of total offense. In reality, Borel's one shining moment against the Broncos was the following year in Logan when he actually generated a teensy bit of offense, but then laid another egg at Boise State in his swan song...a 4 of 15 performance on the Broncos' senior day. 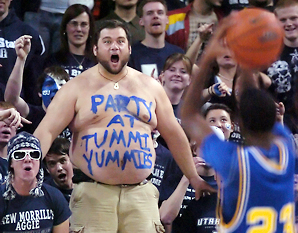 I drove around for an hour looking for that party...

November 10, 2007—Boise State was riding a 7 game win streak after falling short at UW. and the Broncos rolled into Logan and broke out the drubsticks. Taylor Tharp was a Moore-like 26 of 29 on the day, true frosh Titus Young scored 3 TDs and Ia Falo housed a blocked punt.

The Broncos have owned Utah State on the gridiron of late, but this one was just embarrassing.

When Boise State will see the Aggies again ...

If the MWC comes calling.

The Aggies have been lobbying hard for a MWC invite, and it looked like one might come, but alas, Stan Albrecht's world crumbled around him and they were left out in the cold....for now. I'm really not sure how attractive a target the Aggies are for the MWC. They don't represent a big media market and aren't terribly competitive outside the basketball court. That said, the Aggies have shown some improvement on the gridiron over the last few years and the MWC may want to bolster the league's basketball resume with the departure of BYU.

What is your most memorable memory of Utah State? Share your thoughts in the comments.