Boise State officially says good-bye to the WAC this summer, leaving behind rivalries, mismatches, and a whole lot of memories. For the next week or so, OBNUG will be bidding adieu to each and every WAC team. Today: NMSU.

We had some good times against New Mexico State, didn't we? There was that one blowout, that other blowout, that game that was kind of close for a couple quarters. New Mexico State never got the blood boiling the way other WAC teams did, but they were always good for some fun - be it a Hal Mumme joke, a good beatdown, or what amounted to a bye week basically.

After the jump, I reminisce about the Aggies. Feel free to add your favorite NMSU memory in the comments.

In five of the six games against BSU, the Aggies scored a grand total of 13 points. Those five games included blowouts by 59, 58, and 49 points.

The only game decided by 35 points or fewer came in the 2006 season when New Mexico State put a scare into the Broncos down in Las Cruces. Chase Holbrook threw for over 500 yards on 50-of-66 passing, and Hal Mumme and the Air Raid offense did exactly what they were supposed to do - keep a game entertaining for three quarters and then lose. 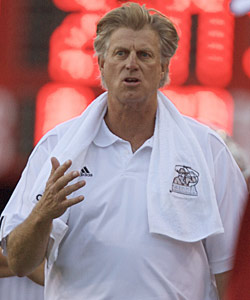 In some college football circles, Mumme is considered a mad genius for his Air Raid offense and wizard-like mentoring of Tim Couch from a skinny Jared Lorenzen to the No. 1 overall pick in the NFL Draft. Does the man know his football? An eponymous strategy guide and $104.99 would say yes. Bronco fans who watched Mumme coach the Aggies would say no.

What made Mumme such a memorable part of Boise State's WAC days was his air of empty intimidation, his ubiquitous towel, and his threats of turning New Mexico State into a Boise killer. Those threats never came true, his Air Raid offense never really took hold, and the Aggies fired Mumme after four years in Las Cruces. He is now coaching at Division III McMurry University, which I can only hope is a stepping stone to the offensive coordinator gig at Colorado State. 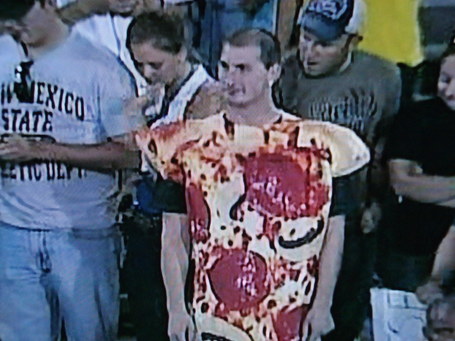 After a 2007 blowout, Boise State safety Marty Tadman suggested the local papers go with the headline, "Mumme Needs Bandages," which is great because the Aggies got absolutely destroyed (outgained 604 yards to 89 yards) and NMSU spent the week discounting the Broncos's obvious talent. Also, it's a pun, and the local media loves their puns.

When Boise State will see the Aggies again ...

In all the realignment talk, pretty much the only name not being tossed about is New Mexico State's. It would take some sort of serious extortion for Gene Bleymaier to willingly schedule the Aggies as a non-conference opponent, so it appears this annual meeting will be off the schedule for time immemorial.

What is your most memorable memory of New Mexico State? Share your thoughts in the comments.