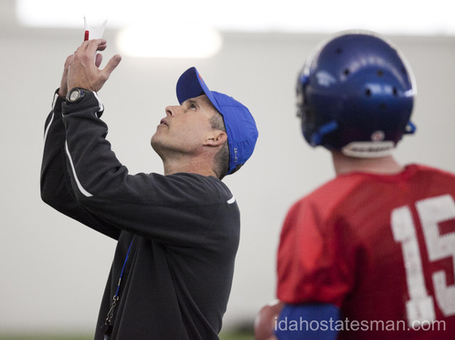 Spring Camp rolls steadily, silently on as the team approaches their first scrimmage on the 23rd. Not much in the way of practice highlights are really coming down the pike this year, so I've culled some of the more interesting bits and blurbs to have trickled out from the various local "news" media since our last update. If you've been more focused on the NCAA basketball tourney...shame on you! There's football afoot.

You guys do know that Kellen Moore is a senior right?

This startling fact sure makes the backup QB race seem mighty relevant this year. Whoever emerges from Spring and Fall ball as the clearcut #2 has to be considered the odds on favorite to take the reins of the Bronco offense when we hit year one A.K. (after Kellen) in 2012. Of course, the Mayans apparently foretold the world's ultimate end in 2012 so this might all be moot...and besides, who wants to live in a world where Kellen Moore isn't your starting QB?

Joe Southwick has impressed Bronco fans with his grasp of the offense since last Spring, but we only saw him in mop-up duties during the year (and an extremely ill-advised goal line option against Oregon State), so it's not like he's a lock at this point. Then, you have Grant Hedrick, your reigning offensive scout team player of the year. Hedrick, a coaches' son whose senior stats looked very Kellen Moore-like ('cept for all them rushing yards) impressed the heck out of the defense last season. Hunter White, for example, was not non-plussed...quite the contrary: Plussed!

"He is such an athlete," senior nickel Hunter White said. "He’s got a great arm, he’s fast and he’s not afraid to take off and run. … He really impressed me a lot (last year), especially with his feet."

I wouldn't be surprised to see some special packages this year drawn up for Hedrick, as his wheels appear to be legit. Could the "Wild Hedrick" materialize? A man can dream.

Also, it looks like Hedrick has a good head on his shoulders, after learning of his admiration for the head that's on Kellen Moore's shoulders.

"Your ultimate goal is always to try to get to Kellen’s level," Hedrick said. "He’s the top of the top. … Mainly what I ask him is the mental part of the game, what he’s reading (from the defense). He could be one of our coaches right now. He’s that smart."

Looks like Brent Pease better keep his head on a swivel.

No, I'm not talking about the name of Rosie O'Donnell's new autobiography—I'm talking about OUR Bacon...the sometimes dominant, sometimes suspended Canuck D-tackle. Atkinson showed a lot of promise as a freshman in 2009 only to squander a seemingly promising-er 2010 when Coach Pete swung his mighty banhammer. This year, Bacon is ready to stay on the straight and narrow (well, not too narrow) and contribute all year long to what might be one of the best D-lines in the nation. Roomie Chase Baker likes what he's seeing from the big man so far this year:

"He messed up but he’s on the right track," Baker said. "It’s up to him and he knows that. Just living with him, you can see a huge change. He has no intentions of messing things up. He’s beyond precautious now."

Precautious: Survey says...IT'S A WORD! Looks like he used it properly too. Color me precautiously impressed.

Nickel still a toss up...call it in the air

As we've mentioned before, a whale of a position battle is shaping up to replace Winston Venable at Nickel. Hunter White has slimmed down for his senior season to reduce wind resistance, Jonathan Brown is out for Spring with what the SID calls "none of your business", and JC transfer Dextrell Simmons is giving great effort but sometimes needs a compass:

"I probably pointed him out in film ... as much as anyone, just in terms of effort, running around the field and what it should look like," Boise State coach Chris Petersen said. "Granted, half the time, he's running the wrong direction. At least he's running fast, and we'll get him dialed into the right direction."

Seems to me we've got 3 dudes at nickel who can play at a high level. The best kind of dilemma to have (besides living too close to a Five Guys Burgers and Fries). Here's Dextrell Simmons talking about his thoughts on Spring ball thus far (courtesy of KTVB and Ryan Larrondo's blank stare):

Coach Pete wins yet another award, is a saint

Coach Pete received the Bobby Dodd Coach of the Year Award at a sold-out banquet Saturday night at the Grove. Petersen, a two-time recipient of the Bear Bryant Coach of the Year award was given the Dodd award based on not just on-field performance, but also displaying Scholarship, Leadership, and Integrity. Pete displayed the latter two at the same ceremony where he and his wife, Barbara, presented the Mountain State Tumor Institute with a donation of $90,000. What is it with this guy? He does nothing but win on the field, maintains a stellar APR, gives back to the community in a BIG way and spurns offers from "bigger" and "better" schools like it's a hobby. Are we being put on? All I ask of Bronco Nation is that tonight when you say your prayers, send a big thank you up for having Coach Pete in Boise, Idaho.

I'm not all gears and clockwork inside like Kevan so I don't get up at 3 AM  to scour the interwebs for late-coming Spring camp news. If any actual details of day 6(?) are released as the day goes on, I will update accordingly.