Share All sharing options for: Seven Cinderellas for your NCAA Tournament bracket

Whether you're playing OBNUG Tournament Pick 'Em with your Bronco friends or filling out brackets at work for moolah, you are going to need some Cinderella coattails to ride all the way to bracket glory. I have seven suggestions for you after the jump on which baskets you should place your upset eggs. Enjoy picking Gonzaga? Want multiple 12s upsetting multiple 5s? Ever heard of Wofford? Continue reading for my picks, and feel free to add your thoughts.

Already filled out my March Madness brackets. I picked "The King’s Speech" over UConn.less than a minute ago via web

This year's 5-12 matchups include K-State versus Utah State, Arizona versus Memphis, Vanderbilt versus Richmond, and West Virginia versus either UAB or Clemson. Bronco fans know Utah State to be a pain in the rear, so that's an option. Experts seem to like Richmond over Vanderbilt. Memphis is plucky, Clemson will be warmed up. Why not pick all four?

BYU has lost big in recent games against New Mexico and San Diego State. Wofford is no slouch, and you know you want BYU to lose as soon as possible.

The Red Storm will be without guard/forward D.J. Kennedy, so why not kick the Johnnies while they're down and go with Leon Rice's old employer?

A No. 16 seed has never beat a No. 1 seed in NCAA Tournament history. So how cool would it be to say you picked the first 16-over-1 upset ever? Pretty cool. Also, doing this every year is the single biggest reason why I never win my NCAA Tournament pool.

The Nittany Lions made it to the Big Ten championship game as the tournament's No. 6 seed, so they have some momentum. I have no idea what Temple did because I don't get the A-10 channel.

Come join us over on ESPN for the annual OBNUG Tourney Pick 'Em extravaganza. Registration is free, the group is open to the public, and you can pick Gonzaga to go as deep into the tournament as you want. I have them in the Elite Eight. I am not very good at picking brackets.

First prize: A customized Nike Destroyer jacket. It basically looks like this except with added bling: 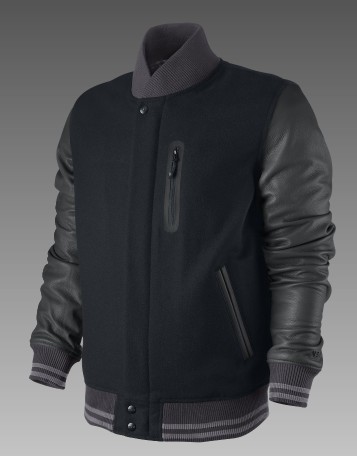 The back of the jacket says, "Go Broncos, beat Vandals." The sleeve has a state of Idaho patch. It's something that your significant other will be totally embarrassed of when you wear it in public, and really, isn't that the true sign of good fan apparel?

If the group gets over 100, I'll raid the OBNUG prize closet for more swag.

Good luck, everyone. And I am mostly referring to me and my three entries.

If picking tournament teams is not your thing, maybe tournament friends would be. I'll let the good hands people at Allstate explain.

Ever wish that more things worked like college brackets? That you could seed everything that way? Top 64 pre-game foods. Top 64 college players. Well, now you can do just that with your friends, with the Allstate BFF Brackets, which takes your 64 top Facebook friends (an algorithm seeds them based on interaction) and seeds them in four regions, exactly like the real tourney. Once the tourney starts, your friends advance with the corresponding seeds – till one is left standing. Check it out at http://apps.facebook.com/bffbrackets/