Local media skimped on details from day 2 of Spring practice, but did manage to squeeze a few quotes out of a QB Kellen Moore, who's gone all emo since Bryan Harsin's departure for Texas. As you may recall, Kellen had been mentored the last four years by Capital High's own Bryan Harsin, and, in turn, developed into a fairly decent quarterback in his own right. Little did we all know that UT's Mack Brown had been leering at the Boise State program for the last few years like your creepy neighbor that brings his trashcans in from the curb at 3 AM—an offer was extended for Harsin to bring some of the Boise State magical offense juice to Austin and...well, now Brent Pease is our OC. Pease should do just fine...but that doesn't mean that Kellen doesn't miss his buddy Harsin. No, not by a long shot.

"We weren’t necessarily just in the coach-player relationship. It probably went a little further than that." 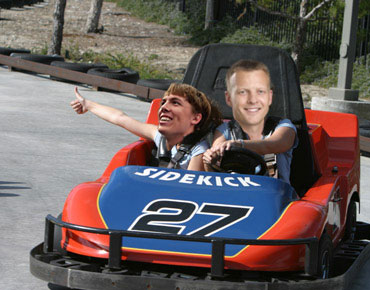 The transition hasn't been too hard though, has it, Kellen?

"It’s probably the best transition I could possibly have," Moore said. "He’s very comfortable. He understands the system. It’s just probably different ways of approaching it, but at the end of the day we’re still doing the same stuff, we’re still trying to get the same goals accomplished and I think it’s been good."

Now that Bob Stoops has gotten off the BCS bowl game shnide, he decided he could finally swallow a little pride and come see how Boise State does things. Stoops was delighted to find out that Ian Johnson, Jared Zabransky, and Jerard Rabb have all graduated. He was also delighted that Boise State isn't on OU's 2011 schedule (UConn we ain't). Stoops brought along DC Brent Venables and co-OCs (must be a Big-12 thing) Josh Heupel and Jay Norvell.

White, Brown, and Simmons enter the cage...only one will leave

Hunter White is ready to take the bull by the horns this Spring and make a run at Winston Venable's vacant nickel spot. White came in as an undersized, but highly touted linebacker recruit. White made the switch to nickel last season, but still couldn't slide past Venable on the depth chart. Now the spot is wide open and White is being called (by some) the frontrunner. Others are banking on Dextrell Simmons—a guy none of us have seen play, or Jonathan Brown—a big hitter who'll be nursing an ankle injury this Spring. White will certainly get a lot of reps during camp and he definitely knows the defense. White has dropped 25 lbs. and has the eye of the tiger heading into his senior year...don't count him out. Coach Choate sez:

(about White's weight loss) That tells you that his mind’s in the right spot for his senior year and he’s poised to take over that position...

Not much, (good grief, would you guys just give OBNUG a press pass for cryin' out loud) except it appears that the Idaho Statesman instead of telling us how big Doug Martin's calves have gotten this Spring choose instead to continue to pursue the SI "crime" story boondoggle. Brian Murphy wants answers!

Yesterday, Kevan broke down the players who'd lost weight this Spring or gained it. It's worth checking out...if only so we can marvel that Mike Atkinson lost 7 pounds and still weighs more than a Ford Festiva.

I'm not all gears and clockwork inside like Kevan so I don't get up at 3 AM to bring in the trashcans to scour the interwebs for late-coming Spring camp news. If any actual details of day 2 are released as the day goes on, I will update accordingly.