Share All sharing options for: Getting to know the Wyoming Cowboys - Boise State's latest lopsided rivalry

Bronco fans already sort of know the Wyoming Cowboys from the 50-burger rout of last year and the relatively close contests between the Broncos and Cowboys in years past. Familiarity breeds contempt? Sure, why not. But it would probably help if UW wins one every now and then.

The Broncos' newest conference underling is the last of OBNUG's Mountain West introductions, so enjoy the Wyoming takedown after the jump. Next year: Big XII conference intros ... maybe? 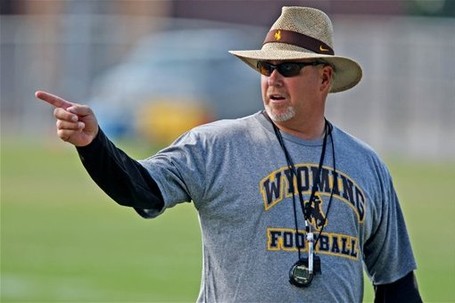 Christensen came to Wyoming as a highly-sought-after assistant coach at the University of Missouri and was courted by Washington, Washington State, and New Mexico before choosing the Cowboys. His football expertise is on offense where his spread attack made Mizzou QB Chase Daniel a cult hero and WR Jeremy Maclin a very rich man. The same cannot be said for the Wyoming WR whose name I cannot remember because he is extremely unimportant.

The man with the golden goatee could do no wrong in 2009, taking the Cowboys to a a 7-6 record and a New Mexico Bowl win in his first year as the successor to Joe Glenn. He should have quit while he was ahead because the 2010 season was a dog - a 3-9 record with losses to New Mexico and UNLV and a last place finish in the Mountain West. New Mexico Bowl curse, perhaps? I guess that could be a thing. Ask Pat Hill.

What fellow Mountain West team is Wyoming's biggest rival, what is their annual rivalry called, and what is awarded to the winner each year?

But it's not just any spread offense. Dave Christensen's spread is a crazy spread with random formations out the wazzoo and an occasional disregard for traditional football. It's kind of fun to watch, when it's working well. Though as a Boise State fan, I have never seen it work well, so I'll have to take everyone else's word for it.

Carta-Samuels, a two-year starter and former Mountain West Freshman of the Year, decided to up and leave to play football at a junior college and be tutored by ... wait for it ... former Oregon QB Jeremiah Masoli. Good luck with that! Probably should write your name on your laptop, too.

2. The post-apocalyptic atmosphere in Laramie.

The stadium sits at the highest elevation of any stadium in college football and the wind and dust and trash blow through like any number of scenes from Mad Max movies. It is a barren moonscape for sure. But hey, I hear they got a Best Buy.

Brown and yellow? Are you trying to give Tim Gunn a heart attack?

Note: Depending on whom you ask, the Wyoming uniforms are either the coolest duds in college football or absolutely hideous, so I expect some to disagree with uniforms being on this list.

The Wyoming player was killed in a car crash during last season in the week before the Boise State game, and in a lot of ways, the Cowboys never recovered. You can make fun of them for losing to New Mexico and failing to live up to expectations, but it's best to leave Narcisse out of it.

If Wyoming were a WAC team ...

... they would be the Louisiana Tech Bulldogs.

Like LaTech, Wyoming puts a good scare into Boise State every now and then, ultimately losing and never really challenging for a conference title. There is the occasional bowl bid and the occasional bomb of a season, and nobody seems to ever know which will be which. And if you squint, Terry Bradshaw = Jay Novacek.

How much you should despise Wyoming

On a scale of one Mark May (strong distaste) to five Mark Mays (cancerAIDS), Wyoming is a three.

For starters, there is a little bit of history with Wyoming, which helps stoke the hate fire at least hotter than a Colorado State. Also, Bronco fans have reported Wyoming fans being complete nubs in interactions with the Cowboy fanbase over the years. It's hard to hate a team too much if they have yet to beat you in five tries, so three is the ceiling. But maybe, just maybe, Dave Christensen will flip off Buster Bronco this year and push it up to a four.

Love Wyoming's uniforms or hate them? Glad to see Austyn Carta-Samuels gone or miss him? Share your thoughts in the comments.