Boise State basketball and the WAC tourney that could be

Share All sharing options for: Boise State basketball and the WAC tourney that could be

Despite losing four out of five, the Bronco men are still well within striking distance of a Top Two spot in the WAC and a catbird seat in the WAC tourney. Continue reading for some mockups of WAC tournament possibilities and a lookahead to this week's games.

How the WAC tournament works

Karl Benson in his inexorable wisdom is changing things up for this year's WAC basketball tourney. The No. 1 and No. 2 seeds receive byes into the semifinals. The No. 3 and No. 4 seeds receive first-round byes. Everyone else has to win four games in four days to win the tournament. Except the No. 9 team. They're not invited.

The WAC basketball tournament if the season ended today ...

Let's begin by looking at the current WAC standings, where somehow Boise State is still doing just fine despite losing four of five. Yay basketball, I guess. (Somewhere, Bill Hancock just got an idea for a keynote speech.)

With these standings as the guide, Utah State and NMSU would get the two best byes. Boise State and Idaho would get passes into the second round. Here's a possible bracket: 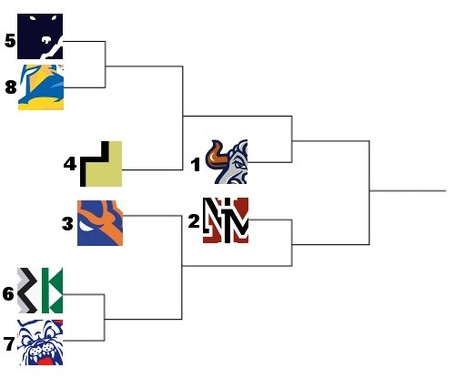 Louisiana Tech has been excused.

Boise State's conceivable road to the WAC tourney title would be Hawaii > New Mexico State > Utah State. The Broncos have beat Hawaii and NMSU already this year. They have not beat Utah State, nor has anyone else.

The WAC basketball tournament if the season goes as Leon Rice hopes ...

The Broncos are very much still in the hunt for the No. 2 spot in the WAC with seven conference games remaining. Leon Rice knows this (because he's a genius savant), and you can bet he'll do everything he can to get the Broncos there.

So let's assume stuff works out the way he wants. Here is a presumptive road to the WAC's auto-bid NCAA spot if Boise State is a No. 2 seed: 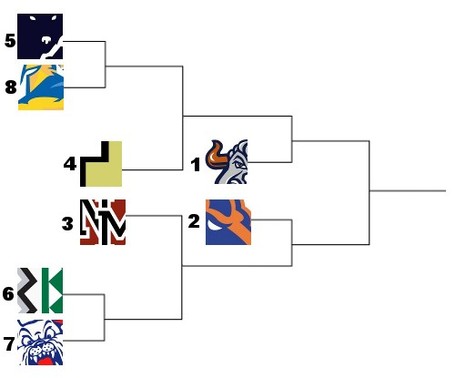 Boise State's conceivable road to the title could be as simple as New Mexico State > Utah State. (Not that Utah State is simple.)

The WAC basketball tournament if the ghost of Greg Graham returns ...

There's also the possibility that the slide continues and Boise State finishes out of the Top Four in the conference. You could probably write off an NCAA Tourney berth at that point because here's what the bracket would be: 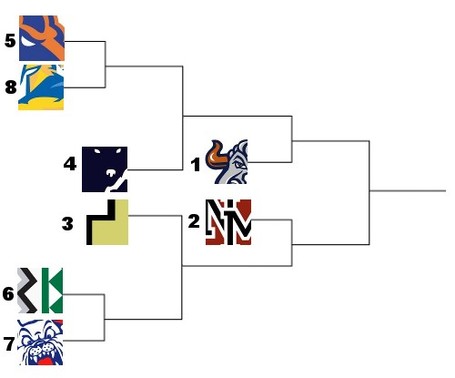 In this scenario, Boise State would have to go through San Jose State > Nevada > Utah State > New Mexico State to win the title.

The Broncos host Hawaii tonight in only the third home game since the calendar flipped over to aught-11. Those other two games were losses to Utah State and Nevada, which drew crowds of 8,800 and 6,400. Think BSU will get anywhere near that many folks out to this one? There's not a Steelheads game or anything.

On Saturday, the Broncos play the toughest game on the WAC schedule with a visit to Utah State. I don't expect that to go well, but I do remember BSU playing the Aggies tough in their matchup earlier in the year. At least, I think that was this year. I'm kind of in a recruiting fog right now.

Who would you like to see Boise State face in the WAC tourney? Think the Broncos can secure a No. 2 seed? How do you think this week's games will go? Share your thoughts in the comments.