Share All sharing options for: Getting to know the UNLV Runnin' Rebels - There's always basketball season

By 2012, Boise State will be playing either in Las Vegas or Reno every single year in conference play. This is great news if you like Wayne Newton and cheap buffets, but terrible news if you owe your bookie money to keep his goon's baseball bat away from your kneecaps. At any rate, there are a good many people that enjoy the unique pastimes that Nevada has to offer, unfortunately, you'll also have to wait till 2012 for a competitive game to take place in the state.

Read on for an overview of Boise State's new doormat on the football field and overlord on the basketball court—The UNLV Runnin' Rebels. 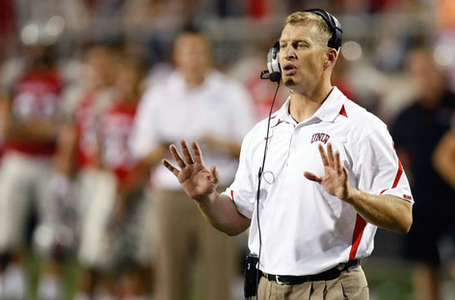 UNLV head coach Bobby Hauck has just one season at the helm, but man, I'm sure it feels like it's been a lot more. Hauck led the Rebels to a craptastic 2-11 record in 2010— serving as a nice "we're not in the Big Sky anymore" moment for the former Montana head man. Hauck racked up Chris Petersen-like numbers in his 7 years with the Grizzlies, going 80-17 between 2003 and 2009. One other thing Hauck may grow to miss now that he's ensconced in Vegas: the chance to win a national championship. Hauck's Grizzlies made 3 appearances in the FCS championship game during his tenure, coming up short each time, but being comforted in the losses by 7-straight Big Sky conference championships.

Besides domination in Missoula, the Hauck years were marked by controversy, as 11 separate violent incidents involving Grizzly players came to light during his tenure—ranging from domestic violence to murder (it's all good, he was acquitted). Good news for Hauck, however...if his players managed to get into that much trouble in Missoula, Montana...I'm sure living in Las Vegas will be no sweat, right?

It's been a tough decade for the Rebels program, but Hauck's debut actually went worse than expected as Mike Sanford had at least flirted with bowl eligibility in 2008 and 2009. Hauck, of course, didn't have a lot to work with, in 2010 implementing a new system for some pretty so-so Sanford recruits., and I would expect the next few years to see a slow, steady uptick in success. It will really take some kind of coaching for Hauck to return UNLV to respectability, but it might not take quite as much work to at least get them out of the cellar.

This former UNLV QB is one of only four Rebels to pass for over 5,000 yards in his career. He played in the NFL for the Dallas Cowboys (mostly as a backup) and now has a more famous offspring. Name the player (bonus points for naming his now-famous kid).

UNLV didn't have a single player earn all-conference honors on either side of the ball last year...and I'm including first and second teams. The only returning player to earn any accolades at all was DB Will Chandler, who pulled down a respectable 5 INTS in 2010. Outside of Chandler, you have to look really hard to find a difference maker on the squad that only defeated New Mexico and Wyoming last season.

Despite the recent woes, the Rebels did pick up some immediate help on signing day this year—notably 4-star MLB Princeton Jackson, a teammate of 2011 Bronco-signee Dextrell Simmons at Blinn College. It's probably safe to assume that no position is really safe on the Rebel squad heading into Spring camp. 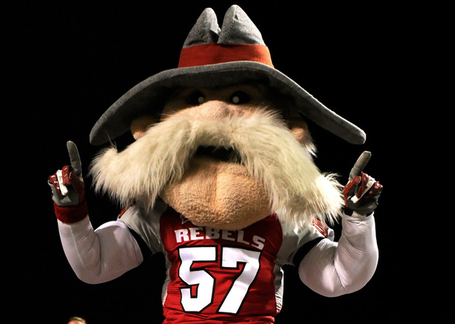 I don't know how to break this to you, Rebels: your mascot is Wilford Brimley. Diabeetis.

Ex-coach Jeff Horton was poached from rival Nevada before the 1994 season and things were looking good as he posted a 7-5 record and drubbed Central Michigan in a bowl game. Over the next 4 seasons, Horton won just 6 games (combined) and slunk out the back door in 1998 after an 0-11 season. His .22 winning percentage is worst in school history (albeit not that much lower than Mike Sanford's...coming up next).

Ex-coach Mike Sanford falls all over himself (literally) and acts like a petulent brat after UNLV lost to Iowa State in 2006. I could watch this all day.

Most of the distinguished Rebel alumni did their work on the basketball court (Shawn Marion, Larry Johnson, Greg Anthony...), but Cunningham was one of the only bonafide stars who called the UNLV gridiron home. Cunningham, a dual-threat QB before it was cool, led the Rebels to an 11-2 record in his junior year (the only 10+ win season since the school joined 1-A in 1978) and earned all conference honors at quarterback and punter. Cunningham was the Eagles second-round pick the following year and went on to a memorable, but injury-prone professional career that lasted until 2001. Cunningham was a 4-time Pro Bowl selection, a 4-time All-Pro, and won the NFC and NFL Player of the Year awards in 1988.

No, it's not Colin Kaepernick

1. The winningest coach in UNLV history is Tony Knap (47 wins in 6 years)  > 2. Before coaching at UNLV, Knap was the head coach at Boise State. He enjoyed a "little success" in Boise, too (71 wins in 8 years)

... they would be the Utah State Aggies.

Not much going on the gridiron for either of these squads...but both schools can't wait for basketball season. UNLV has appeared in the Elite Eight on five seperate occasions, made the Final Four a total of four times, and took home the NCAA basketball crown in 1990 by putting a whooping on Duke.

How much you should despise UNLV

On a scale of one Mark May (strong distaste) to five Mark Mays (cancerAIDS), UNLV is a two.

Really hard to break open the hatorade on many of our new conference foes as we simply don't have much history with any of them. UNLV actually is more familiar to Boise State than the lion's share of the conference, evenly split with 3 wins and 3 losses against the Broncos. However, the squads haven't met since 1977 and the programs have gone in vastly different directions since leisure suits were in style. We'll just have to let Nevada-Reno project all the UNLV hatred once they join the MWC in 2012.

Know more about UNLV football than I do? Enlighten us. Think I was too harsh on the Rebels prospects or not harsh enough? Let us know about it in the comments.