Share All sharing options for: Getting to know the TCU Horned Frogs - the mortal enemy of the year

The TCU Horned Frogs are a Mountain West team for one more year, so get in your shots while you can. I get in my fair share after the jump, and you're invited to do the same. What is up with Gary Patterson's fascination with pants? Can the TCU defense really be No. 1 for four straight years? Big East much?

Read on for an overview of Boise State's new arch enemy of the year. 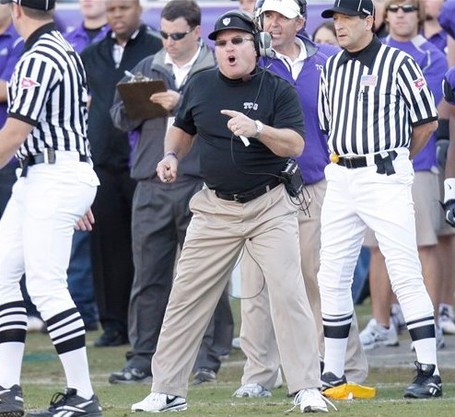 I think it's safe to say that the TCU boss is the Coach Pete of Mountain West coaches. His teams are disciplined, talented, and successful. He won 10 (yes, 10) coach of the year awards in 2009, including one from the AP. He has won back-to-back conference titles. He gets interest from almost every school with a job opening each offseason yet remains committed to his job. Yes, he sometimes looks like a garden gnome with Tourette's, but the man can coach.

TCU's ascension under Patterson didn't happen over night. After succeeding Dennis Franchione, Patterson and the Horned Frogs won a CUSA title in 2002 and a MWC title in 2005. It's the last two years that have really provided Patterson's boost from the Pat Hill zone to the Coach Pete zone - although Patterson must have found some sort of loophole because he gets paid $3 million per year, which is a little out of the Coach Pete zone range.

Who was the all-time leading passer at TCU before Andy Dalton? And what color hair did he have?

The past few years of TCU football has been defined by defense  - dominating, eviscerating, annihilating defense. Here are the national rankings for the past five years in total defense (yards allowed per game):

Boy, they sure sucked wind in 2007, huh? /uncomfortable laughter

The hallmark of the D is speed, put to good use by a 4-2-5 system that maximizes the talents of its many premium parts. Players like Jerry Hughes and Daryl Washington have made big impressions over the years, and new studs like Tank Carder, Tanner Brock, and Co. just keep filling in the holes. The TCU defense will once again be good this year, just hopefully not better than everyone else. Colorado State would like to score some points, please. 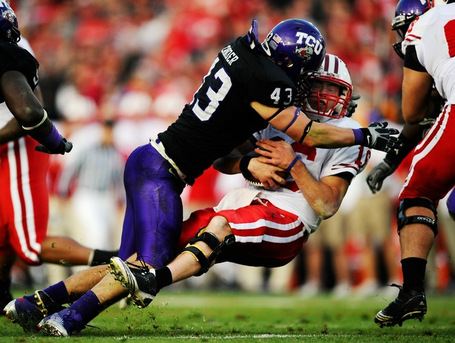 There is a fine line between practical accessorizing and being a tool, and Carder is so completely on the tool side it's not even funny. I mean, can he even feel his forearms? Is he getting ready to amputate at the elbow? Is this some sort of weird fetish?

2. Gary Patterson's obsession with pulling up his pants

One of Patterson's sideline tics has earned him the nickname "Pants-Action" Patterson. This is both awesome and weird.

3. TCU selling out to join the Big East

Don't get me wrong: if I were the Boise State Broncos and received an invitation to join the Big East, I would jump that like a Bama fan on a Chick-fil-A bogo. But that invitation hasn't arrived yet, so ... smooth move, ex-lax!

TCU has won a national championship

The 1938 TCU team, featuring QB Davey O'Brien, went undefeated and was named national champs. The Horned Frogs also claim a title in the 1936 season based on the Paul O. Williamson poll, which you've never heard of.

TCU played in the Southwest Conference - a big deal back then - and therefore has more history and accolades than most other Mountain West schools combined. Envy them for it, but no joking.

... they would be the Boise State Broncos.

The Horned Frogs have been the clearly dominant team in the Mountain West for two years running, which - multiplied by five - is the exact same as the Broncos and the WAC. TCU has a great coach, a great system, great athletes, and a chance at going to a BCS bowl every year in perpetuity if they can get past UCONN. Replace UCONN with Air Force, and you basically just described the Boise State Broncos.

How much you should despise TCU

On a scale of one Mark May (strong distaste) to five Mark Mays (cancerAIDS), TCU is a four.

Finally, a Mountain West team with a little bit of history with the Broncos. Can you play three games total - ever - and be considered rivals? Sure, why not. It helps that the past couple games have been great. TCU bullied Boise State in the Poinsettia Bowl, Boise State returned the favor in the Fiesta Bowl, and this year's matchup is expected to be legen-... wait for it ...-dary.

History on the playing field is one thing, but Boise State fans have to also feel a little contempt for how TCU has lived out Bronco Nation's dreams for the past nine months. TCU went undefeated, played in the Rose Bowl, and got an invite to an automatic-qualifying BCS conference. That was supposed to be Boise State's destiny. I had started a scrapbook and everything.

For a budding rivalry, for taking BCS spots from BSU, for having Andrea Adelson talk about you when she should be talking about the Broncos, TCU deserves your hate. The only reason that TCU is not a five is that I can't help but respect them for playing hard-nosed football. I guess that's admirable.

Do you think TCU will be the Broncos' toughest game this year? What are your views on Gary Patterson? Any rational explanation for Tank Carder's arm bands? Share your thoughts in the comments.