The NFL Combine begins its meat market today with the first set of interviews, weigh-ins, and jokes at the expense of Nathan Enderle's physique. I'll get things started. Is that your chest or did someone rent a bounce house?

Boise State's Austin Pettis, Titus Young, Jeron Johnson, Brandyn Thompson, and Ryan Winterswyk are in attendance, which means David Augusto is also probably in attendance somewhere too. Hit the jump for the details on when you can see Young and Pettis run the 40 as well as the schedule for all Bronco players at the Combine.

As Chadd Cripe reminded us all in yesterday's Idaho Statesman, the 40-yard dash is important - not in a pure football ability way but rather in a cool shiny object kind of way. It is NFL scout catnip. That said, it can earn you major bucks.

Here are the days to watch the NFL Network and check your Twitters for Boise State's player 40 times:

It should also be noted that Titus Young is pretty dead set on running the 4.2 range when it comes time for his dash. He and LSU CB Patrick Peterson are the two players predicted to run the fastest. For the record, Orlando Scandrick ran a 4.32 at the combine in 2008.

The majority of the NFL Combine will be broadcast on NFL Network. Check your local listings. Clear your Sunday dayplanner.

The rest of the schedule

Not that any of it matters because it's not the 40-yard dash, but here are the dates and times for all the Combine events:

Get to know your NFL Combine drills

The NFL.com website has loads of resources on the Combine, including a sortable database of past achievements, a full list of attendees, live streaming coverage (maybe), and analyst Mike Mayock explaining every single combine drill to you while wearing sweatpants. (HT: Mikrino) 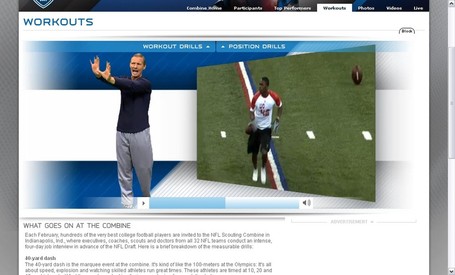 If you've ever wanted to know what a shuttle drill is supposed to look like, Mike Mayock will mime it to you.

WAC players at the NFL Combine

The list of invites. Tim Rattay weeps for LaTech football.

Will you be watching the NFL Combine this weekend? Think Titus Young can run a 4.2 40? What do you think Austin Pettis will run? Share your thoughts in the comments.