Getting to know the San Diego State Aztecs - Does San Diego finally have a team as good as their street tacos?

Share All sharing options for: Getting to know the San Diego State Aztecs - Does San Diego finally have a team as good as their street tacos?

San Diego State enjoyed their first winning season in football in quite some time last year, but some are already heralding the triumphant return of Aztec ball. Yep, the same team that went 4-8 in 2009 is now a "world-beater" even outside of Andrea Adelson's sphere of influence. I'm not convinced...but that isn't to say the Aztecs won't pose an intriguing conference matchup for the Broncos next season and beyond. They will...probably.

After the jump, I provide an overview of the San Diego State football team, some SDSU trivia, and more. Follow along or else Montezuma may have his revenge on you. 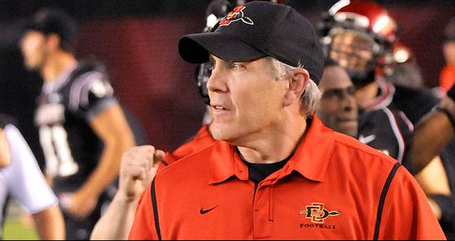 Quick, name the second-winningest coach in the Mountain West Conference. If you said "Mike Locksley", go directly to jail (do not pass go). Since his name is about 2 centimeters north of this sentence, you'll probably not be too surprised to learn that spanking new SDSU headman Rocky Long owns this distinction. Long spent 11 years at the helm of the New Mexico Lobos football program (his alma mater) and was, well...not that great. Long owned a .48 win percentage during his tenure with the Lobos and was replaced after the 2008 season by the much-worse Mike Locksley, however, before he left Albuquerque, he did manage to eke out 65 career wins and five bowl appearances and oversaw Brian Urlacher's barbed wire tattoo.

Long won the MWC Coach of the Year award in 2002 after posting a 7-7 record, so apparently, they let Hal Mumme vote in that one, too. Long's teams are not known as high-octane offensive units, but he's known as a good defensive coach and in his final 9 seasons at New Mexico his defensive units ranked among the top 30 in fewest yards allowed six times. Long gets credit for the Aztecs Poinsettia Bowl win over Navy after Brady Hoke bolted for Ann Arbor, but he'll prove in 2011 whether he's riding Hoke's coattails to victory, or if he can do something special in San Diego. I'm betting on the former, but I'm not really much of a gambler.

When did San Diego State win their last conference championship? How many winning seasons have they had since then?

Running back Ronnie Hillman turned the Mountain West Conference on it's ear last season as a freshman—rushing for over 1,500 yards and scoring 17 TDs. Hillman was a FWAA Freshman All-American after posting the best season ever by a freshman running back at the school—and Marshall Faulk went there, remember? Hillman seemed to really turn things on when the lights were bright...racking up 200+ yard games against Missouri and then against Navy in the Poinsettia Bowl. If he's healthy...he adds a terrifying dimension to the Aztec offense. Thankfully, the Broncos have stopped most of the big name backs they've faced of late...a notable exception also being familiar to the San Diego area.

Annointing Hillman "the second coming", however, may be as premature as it is blasphemous. Mmmm, sacrilicious!

Here is the artist's rendering of the way San Diego State's fearsome mascot, Montezuma, was to appear: 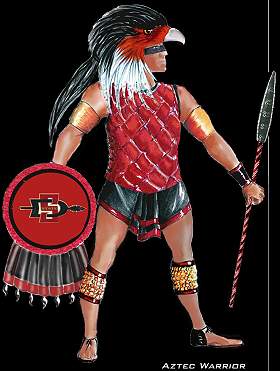 And here's how he appears in real life: 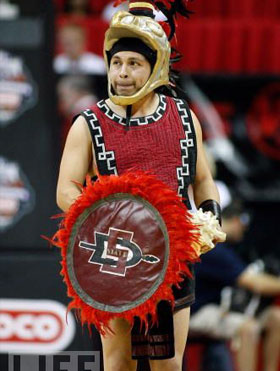 San Diego State basketball has just one loss on the year. Why, you ask?

Coach Coryell owns exactly half (7) of the championships in San Diego State's history (14) and between the years of 1966 and 1969 led the Aztecs to a 41-1-1 record. You probably guessed that Coryell's 104-19-2 record is the best in school history, but you may not have guessed that it's nearly double his closest challenger. Coryell was one of the innovators behind the "I-formation", a member of the College Football Hall of Fame, and the first coach to ever win over 100 games at the collegiate and pro levels. 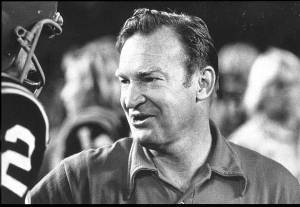 1. New Denver Broncos' head coach John Fox played defensive back for the Aztecs in the late 70s. >2. John Fox was the defensive backs coach at Boise State during their championship season in 1980.

If San Diego State were a WAC team ...

I kinda feel bad about this one, as the Aztecs have a much more illustrious history than the Vandals...but their success arc over the last 15 years is remarkably similar. Extremely long drought between bowl games? Check. Winning season with star running back stirs alums out of failure coma? Check. Whether the Aztecs can turn last year's success into long-term success remains to be seen...Idaho's already back to their not-so-old tricks.

How much you should despise San Diego State

On a scale of one Mark May (strong distaste) to five Mark Mays (cancerAIDS), San Diego State is a two. Brady Hoke seemed to have the squad rolling and playmakers Vincent Brown, Ronnie Hillman, and Ryan Lindley were fun to watch in 2010. Hillman and Lindley return, but Hoke is off to greener-not-warmer pastures, and Vincent Brown is a solid draft prospect. It'll take more than one good year for the Aztecs to make any major noise, but they're playing good ball for the time being and new coach Rocky Long seems like a nice enough chap.

What do you think of the Aztecs? Will Hillman be a match for the Bronco defensive line? Hope that Aztec costume isn't dry clean only? Share your thoughts in the comments.