For this week's roundtable discussion, Drew and I gave ourselves the arduous task of predicting the future of Boise State football, specifically who would be the breakout star of the coming season. My prediction strategy: Naming half the roster. Drew's prediction strategy: Rational thought. And somehow we were still friends when it was all said and done.

Continue reading to see who we came up with, and feel free to add your own breakout candidates in the comments. Ground rules, nominees, and more after the break. Enjoy.

Who will be Boise State's breakout star this season?

Let me lay some ground rules:

Other than that, everyone is fair game. Including D.J. Harper, so ... dibs on D.J. Harper!

Harper would definitely be on my short list, but I'm not sure how much of a breakthrough you can have when you're backing up a Doak Walker candidate. Was Brett Denton alive in 2006? I can't remember.

So in addition to Harper, let me also throw out some other breakout player possibilities like ...

And now for my current favorite breakout player candidate at least until you say someone I forgot and I totally jump on that guy's bandwagon: WR Matt Miller. There are balls to be caught at the wide receiver position this year, and Miller has a real shot at being a big part of the Bronco offense. Consider that he was supposed to play as a true freshman last year but didn't. Consider now that he has a year with the Bronco offense under his belt, is (hopefully) recovered from his ACL injury to participate in BOTH spring and fall camp, and that the only thing standing between him and a starting spot is a cluster of receivers who are his equals. Someone is going to rise from the unproven WR group and catch 60 balls for 1,000 yards and 10 TDs. I say it's Miller. 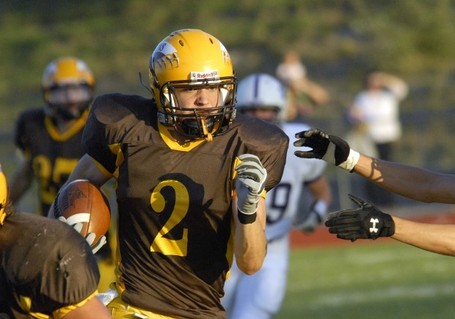 Also, I will never get to go first in a roundtable ever again since I just named six players before you had a chance to name any. My apologies.

I think what you just did there is called "setting a screen". Since you've basically already mentioned most of the players that I would have (and most the players on the roster, for that matter), I'm going to dig deep for my list.

Now let me praise your excellent taste. Matt Miller is a fine candidate for breakout player of the year as he might have been the biggest "get" of last year's class (and that includes Ioane). Unfortunately, I think that Miller's injury is actually an Achilles injury, not an ACL, and from what I hear...it's one that takes a shade longer than the dreaded ACL to fully heal. I doubt that Miller will be practicing this Spring, so he'll really have to be 100% in the Fall or he won't have many opportunities to breakout in 2011.

Would you believe that I abbreviate Achilles as ACL?

If Miller can't go this spring, that throws a wrench in my prognosticating. Why must he be cursed with Randall Cunningham's heels?! And is it too late to replace him with Geraldo Hiwat as my breakout player of choice?

One thing I noticed while rebutting is that our lists of breakouts shares a similar thread. Our top picks were receiving threats. We each had an offensive lineman, linebacker, and cornerback. I mentioned Jeremy Ioane and you would have if I didn't. We're like the same person, Drew, only different.

In a lot of ways, I think we are right to assume that the breakout player will come from one of these positions. With receiver and corner, you have two of Boise State's most open roster spots. With linebacker and O-line, you have the two traditional positions where the Broncos are most indecisive. I have nothing bad to say about your picks of Linehan, Leno, Mooney, and TBD cornerback, just as you were highly complimentary of my Myers, Tevis, and Gavins choices.

So let's get down to the nitty gritty. Who are you going to go on record with for your breakout player of the year? I'll let you go first so that I can copy you.

Would YOU believe that my list was merely a catch-all for players that will probably see much more playing time this year? My true pick for breakout player of the year was a closely guarded secret...which is why I didn't tell that blabbermouth dog from Bush's baked beans.

Breakout player of the year can't be a shared award, so with that (Michael Scott drumroll, please), I'd like to announce my intentions to give the title to Geraldo Hiwat. 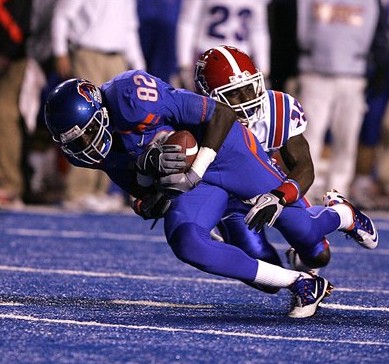 Arguably the biggest void on the team in 2011 will be at wide receiver and the man that steps into the shoes of our biggest receiving threat from 2010 seems like a lock for this distinction. Hiwat possesses arguably better straightaway speed than Titus Young and is about the same size as Austin Pettis. Considering he was a state finalist in the long jump as well tells me the kid can jump. I think the only thing Hiwat is really missing is valuable time with the offense. He's going to get thrown about a million balls this summer in player-run practices and I really think he'll be able to develop the kind of Pettis/Young mindmeld with Kellen Moore over the course of the season and be a homerun threat and a possession receiver all rolled into one amazing Dutch package. Furthermore, I believe that Hiwat will develop an endzone celebration called "the Windmill" that will give a nod to his heritage, delight fans, and really tick Coach Choate off. It's going to be a great year.

"The Windmill", eh? I guess that leaves "The Stroopwafel" for Ricky Tjong-A-Tjoe.

Since you went offense, I'll go defense. My pick for breakout player of the year is Cedric Febis ... or Jeremy Ioane ... or Dextrell Simmons. Now wait, hear me out on this. I know that the Broncos are going to get an impact player in their secondary, I'm just not sure which one it's going to be. In essence, you have three players vying for two spots - Febis and Ioane at safety and Simmons and Ioane at nickel. Someone's going to get left out, and I have a good feeling and reams of historical data that it's going to be the one I choose as breakout player of the year. 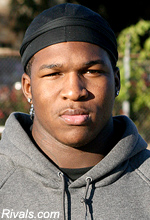 I think we both are guilty of hedging our bets, but I can't disagree with your line of reasoning. Boise State doesn't often pull talent from the JC ranks, but when they do, it usually works out well and quickly. Names like Dennis Ellis, Winston Venable, and Tyrone Crawford should give Bronco Nation hope that Simmons could be another immediate impact player and it's worth remembering that Simmons is actually rated higher than Venable was coming out of JC. Of course, he'll have more resistance at his position than my candidate will with Jonathan Brown and Hunter White putting up a fight...but picking the presumptive nickel is a good tactic given recent history.

I feel like we should have disagreed more on this one.

Ha! What do you know?

Who do you predict will have a breakout season in 2011? Is the future star destined to be a receiver, corner, or lineman? What's the big difference between an Achilles and an ACL? Share your thoughts in the comments.