Share All sharing options for: Getting to know the New Mexico Lobos - your Mountain West punching bag

Getting to know the New Mexico Lobos is relatively straightforward: They're terrible, Mike Locksley may be insane, and they remind me so much of San Jose State it's not even funny. But that doesn't mean there's not anything to learn - like just how terrible they are and in what particular ways Locksley is the complete opposite of Coach Pete.

After the jump, I provide an overview of the New Mexico football team, some UNM trivia, and more. Follow along or else Mike Locksley may go all Buddy Ryan on you. 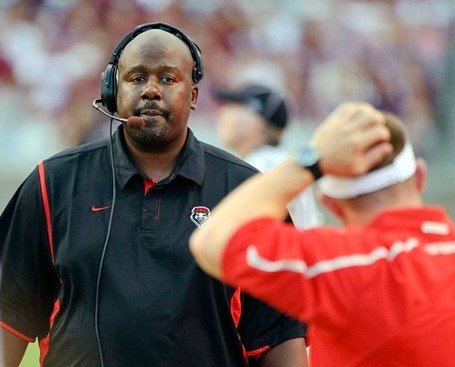 The Mike Locksley Era at New Mexico is not going as planned, unless the plan was to horribly regress and be dogged with legal problems for the first 24 months of his stay. How he is still around is minor miracle, wrapped in a buyout that no one wants to buy out.

For starters, the Lobos under Locksley have won two games total in two years.

Second, the Good Ship Locksley was rocked with a sexual harrassment and age discrimination scandal just months into his tenure when a secretary claimed Locksley wished her to be hot and sexy, the better to attract potential recruits.

And third, he punched out an assistant coach.

When Locksley and Coach Pete stand on the Bronco Stadium turf together this fall, I am not sure they are going to have anything to talk about. Awkward.

Who preceded Mike Locksley at New Mexico? Where is that man (or woman?!?!) coaching now?

Not too long ago (2007, to be exact), New Mexico was on a streak of five bowl games in six years and fresh off a 23-0 beatdown of Nevada in the New Mexico Bowl. What happened? Mike Locksley came to town, for one. And for other explanations, you'd have to ask a Lobo blogger of which there aren't any.

The team is just not good, as witnessed by its two wins in two years, both of which came against bad Mountain West teams. That New Mexico couldn't even get a win in its nonconference schedule - a schedule that includes an annual tilt with New Mexico State - says a lot.

The video features all of Oregon's touchdowns and field goals, and the thing takes nine minutes because the Ducks put up a 70 burger.

Unless Mike Locksley is within earshot, in which case you should compliment him on his Mr. Belvedere physique.

Theirs is a love that cannot be broken. 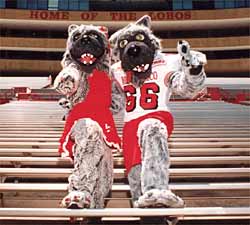 Locksley, while terrible at most aspects of head coaching, is a pretty decent recruiter, which may be the only reason New Mexico keeps him around. Somehow, Locksley and the Lobos remained in the running for the top OT prospect in all of high school football this year, losing out on Signing Day to the SEC.

... they would be the San Jose State Spartans.

How much you should despise New Mexico

On a scale of one Mark May (strong distaste) to five Mark Mays (cancerAIDS), New Mexico is a two. Locksley seems like a real piece of work, similar to Mark May, which is good for a fair amount of hate. But really, the Lobos are pretty harmless, and it just feels cruel to hate them any more than two.

What do you think of the Lobos? Afraid to meet Mike Locksley in a dark alley? Are you in favor of Lobo-Lobo marriage rights? Share your thoughts in the comments.