Share All sharing options for: Getting to know the Colorado State Rams - at least the 4th most popular football team in Colorado

If you live in the Front Range and are a fan of Boise State—Good news! You'll have a chance to watch the Broncos live every single year when they either play at Air Force or Colorado State. Colorado State University is snugly nestled in Fort Collins and once upon a time, had a pretty solid football team. Once upon a time, Boise Towne Square Mall had a Mrs. Powell's. Ahh, memories.

Join me after the jump as I put together an overview of the Rams and try (in vain) to make them look somewhat imposing.

Boise State is joining the Mountain West this year, which means new rivalries, new venues, new teams, and new jokes. Allow OBNUG to bring you up to speed. Today: Colorado State. Next up: New Mexico 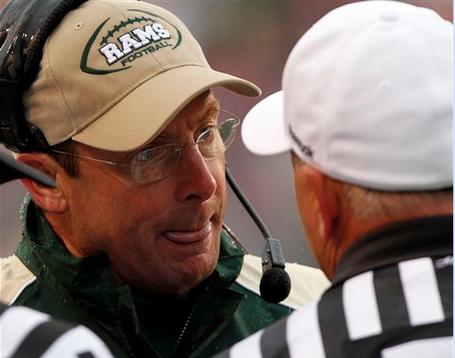 Fairchild was hailed as the June Jones of Fort Collins after engineering a swift reversal of fortune for the Rams in his first year at the helm (2008), that culminated in a New Mexico Bowl win over Fresno State. Sadly, two seasons later, he's now just the Steve Fairchild of Fort Collins after back-to-back 3-9 campaigns.

Fairchild is a CSU alum and has honed his coaching chops in the Mountain West, having held various positions at New Mexico and San Diego State before landing back with his alma mater in 1993. Believe it or not, the Rams won a total of 5 conference titles while Fairchild was on staff...however, none since his return as head coach...and none in the forseeable future. Despite having one of the more milktoast twitter accounts you'll find, Fairchild has opened up about his disdain for the BCS, which makes him totally okay in my book and also makes me regret not finding a more flattering picture of him. Quoth the Fairchild:

The BCS is a joke and very bad for college athletics. Mike Krzyzewski said it best at the Final Four earlier this month, that a team like Butler in college football would never have a chance to reach that stage. And when the BCS talks about fairness in revenue sharing, don't believe it; that's a lie.

You just got called a liar, Bill Hancock et al...whatchu gonna do about it? Hancock: Probably go roll around in some piles of money

Colorado State has produced one NFL Hall of Famer. Who was he and what was his relationship to the greatest moniker'd coach of all-time, Red Hickey?

Most distinguishing feature: CAM the Ram

Enjoy this montage of live mascot "CAM the Ram" set to a rockin' metal soundtrack. SLAYER!!!

The Ram has been the school's mascot since 1946 and the current iteration, a Rambouillet sheep, coincidentally, also named "CAM" has been at the school since 2006. In case you're wondering CAM is an acronym for "Colorado Agriculture and Mechanical College" and he was purchased from his father for the bargain price of $180,000. /rimshot

Coached the Rams from 1973 to 1981. Had a name that the president of Armenia once called "too sterotypical".

2. Imam Anwar Al-Awlaki is an alum. He also dabbles in terrorism (and papier maché). 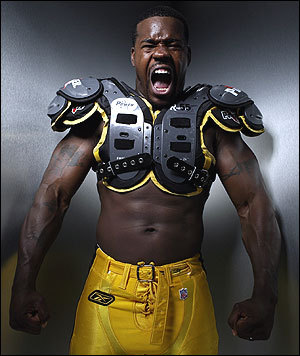 4-time Pro-Bowl linebacker Joey Porter once prowled the field for the Rams (presumably, in little more than these shoulder pads)...oh wait, was that a joke? Damn.

If Colorado State were a WAC team ...

... they would be the Louisiana Tech Bulldogs.

Like Louisiana Tech, the Rams championship-caliber squads aren't too far back to be forgotten, but recent struggles have made many question if former glory can be attained. Also, like the Bulldogs, the Rams usually have an upset or two up their sleeve, and both teams' fanbases severely jumped the gun in believing their squads were "back" after a winning season and a bowl win.

How much you should despise Colorado State

On a scale of one Mark May (moderate distaste) to five Mark Mays (Portajohn at Chili Cookoff in August ), CSU is a flimsy two. They don't pose an immediate threat to the Broncos, their coach is an outspoken critic of the BCS, and they beat Idaho last year.

What are your thoughts on the Colorado State Rams? Do they have the horses to give Boise State a game this year? Is Fort Collins really a fort? Share your thoughts in the comments, including your trivia answer.