Share All sharing options for: Getting to know the Air Force Falcons - the most likable team in the Mountain West

Worse, Air Force is the most likable service academy of them all. They consistently win games and go to bowls and beat BYU every so often and wear lightning bolts on their helmets. Lightning bolts! Are they daring me to start a blog about them?

Join me after the jump as I put together an overview of the Falcons and try (in vain) not to gush too much. 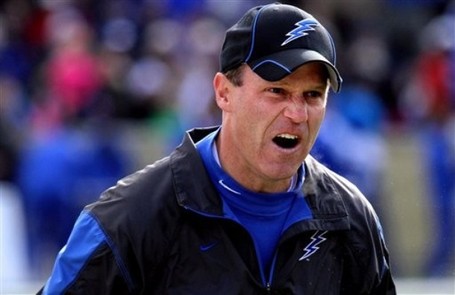 You likely recognize Calhoun's name from his exploits in making Bill Hancock's life miserable, for instance at a kickoff luncheon where he compared the BCS to communism. Yes, that communism.

We basically have a system for college football that too closely resembles the old Soviet Presidium. You have a seven-member politburo that's decided if you aren't one of those party members, then you're unable to participate ...

You think back to the old Soviet Presidium, and what happened was you told every person, "Hey, you aren't going to be able to grow a whole lot. We're going to tell you all you can earn." That was the approach. ... There's a very, very strong resemblance that unfortunately is a part of college football.

In addition to positive football evangelism, Calhoun is also one of the Mountain West's best coaches, as evidenced by his four straight bowl game appearances and 2007 MWC Coach of the Year honor. He is the June Jones of the Mountain West if the run 'n shoot were the triple option and leis were purple hearts and Villi the Warrior were a lieutenant colonel.

Name one Air Force graduate who has gone on to play in the NFL. Leave your answer in the comments. Ricky Dobbs is incorrect.

Air Force remains one of the few schools to still run the old-fashioned option as its main offense. I guess if it ain't broke and if New Mexico has yet to figure it out, don't fix it.

What's the triple option, you ask? Well, it's an offense that features three different run options on each play: (1) the give to the fullback, (2) the QB keeper, and (3) the pitch to a tailback. Variations off of this basic play are myriad, which makes it so effective. The Falcons were No. 2 in the country in rushing last year, averaging better than 300 yards per game. On a related note, AF averaged 7 completions per game, total. The triple option is passing racist.

The Falcons are traditionally one of the worst recruiting teams in the country, probably because they're too busy protecting our freedom and shooting bombs and generally being awesome. Also, 18-year-old kids will almost always choose hot coeds and people who do your homework for you over military service. But still, the Olive Garden called and wants its two stars back. /rimshot

2. Dr. Quinn, Medicine Woman was based in Colorado Springs.

If Boise State playing in blue uniforms on a blue field is an advantage, then what kind of advantage must it be to play in a level of atmosphere typically reserved for commuter flights and actual falcons? Cheaters.

These are actual members of the military. Respect.

... they would be the Fresno State Bulldogs.

Air Force is always a threat to play well during the Mountain West season, but never threat enough to actually win the thing. They're good for some hardy play during the non-conference schedule, some minor upsets here and there during the MWC, and annual losses to the teams they are supposed to lose to - a list that will hopefully soon include Boise State.

How much you should despise Air Force

On a scale of one Mark May (moderate distaste) to five Mark Mays (cancerAIDS), Air Force is a firm one. You can't hate them too much since they protect our freedom and can fly planes. That's pretty cool.