Chris Petersen coaching rumors: Penn State interested because why not 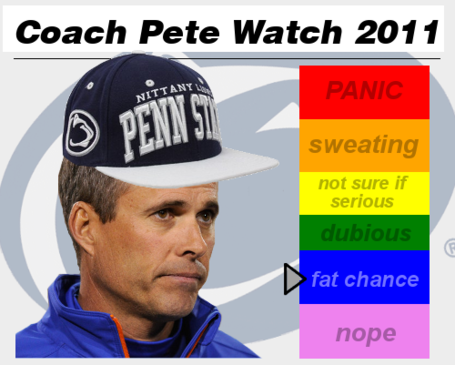 Having successfully spurned the $4 million advances of the UCLA Bruins, Chris Petersen is now available for an entirely new set of rumors. How about Penn State ones?

A report from Pennsylvania's Morning Call newspaper revealed that Chris Petersen is high on Penn State's wish list, due to his high ethical standard, academic priorities, and football winning. Whether or not Petersen is high on Penn State is another matter entirely, but not one that the Nittany Lion search committee seems all that concerned with. It appears they have a Kyra Sedgwick-like closer on their side.

"[Petersen] might be a reach, but I wouldn't put anything past Ira," an unnamed source said. "He can be very convincing. If there's a deal to be made, he can make it happen."

The story cites, as evidence of Lubert's persuasive powers, the one time that Penn State hired a wrestling coach they had no business hiring.

The Nittany Lions plan to conduct interviews the next couple weeks and hope to have a coach in place by the team's bowl game on January 2. SB Nation has continuing coverage of the Penn State hire, including an interview with OBNUG's Drew, so stay tuned there if you think this story has any legs whatsoever.

Do you think Coach Pete would consider a Penn State coaching job? Where would you set the threat level for this one? Share your thoughts in the comments.