The 2011 NCAA playoffs of wishful thinking

Share All sharing options for: The 2011 NCAA playoffs of wishful thinking

Since the BCS robbed us of an entertaining postseason replete with drama and fairness and Gus Johnson moments, we plucky Internetters have had to come up with our own version of what the postseason should look like. Let's have a playoff! This bowl-off isn't working for anyone.

After the jump, I lay out my playoff proposal, which is most people's playoff proposal. Let your dreams take it from there. I don't mean to give anything away, but how about this for a first round Boise State playoff matchup:

As an occasional reader of books, in particular the Death to the BCS book written by Dan Wetzel and friends, I feel pretty good saying that this playoff plan would be the bee's knees: 16 teams, 11 conference champions, 5 at-large teams as determined by the standings, and seeds from the AP poll.

There are 11 conferences in Division I-A football, and as long as we're going to be having a Division I-A championship, I think all conference should be included. Even the WAC one.

After the 11 conference champions are determined, that leaves five at-large spots. In the OBNUG version of the playoff system, these spots will go to the five highest ranked non-champions with rankings determined by the AP poll.

As mentioned in the rules above, the seeds for the playoff bracket are from the Associated Press Top 25, which is the fairest poll I know. In the case that multiple teams are not in the Top 25, I obtain seeds from the "also receiving votes" category. In the case of a tie, I will have Beano Cook and Mark May conduct a pie-eating contest with team-appropriate pie flavors.

The left side of the bracket features a compelling first-round matchup between Wisconsin and South Carolina and a rather interesting game between Oregon and Southern Miss. The second round could have a Stanford-Oregon rematch and could pit LSU against pretty much the only SEC school of note that it didn't beat this year. 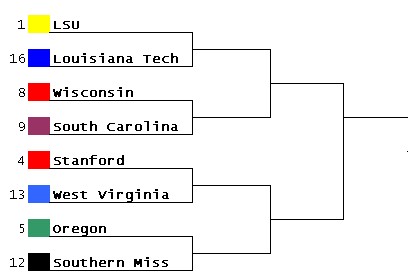 Bracket side right (soon to be sponsored by Dr. Pepper or Barbasol, I would imagine) features our very own Boise State Broncos against the Clemson Tigers. Win that game, and BSU would likely have a date with Alabama, which is pretty much what the state of Idaho wanted from the get go. 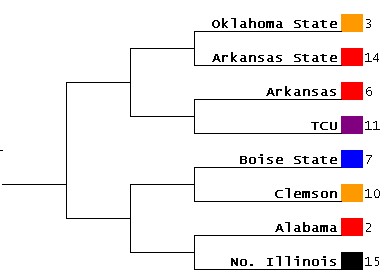 So there you have it. It's a playoff plan for a playoff-allergic sport, and it would be absolutely fascinating to watch. I would not leave the house for a month, which, when added to the three consecutive months that I don't leave the house during the regular season, would make four straight homebound months - a new record for me. Walking pneumonia will totally get erased from my record book.

What do you think of this playoff proposal? Do you think this type of playoff could work? What matchups would you be most interested in seeing? Anyone get left out who can make a strong case? Share your thoughts in the comments.