The USA Today Coaches Poll revealed its coaches' ballots today, serving as a reminder to everyone that coaches probably shouldn't be voting in polls. There was some weird stuff. But first, the Boise State stuff.

You'll get a kick out of Berry's complete Top 25. After a fairly standard Top Five of LSU, Alabama, Oklahoma State, Stanford, and Oregon, his next 10 teams went a little off script. Ahead of the Broncos were Arkansas, South Carolina, Wisconsin, Michigan State, Kansas State, Michigan, and TCU. Someone fast track this guy to an SEC head coaching job. 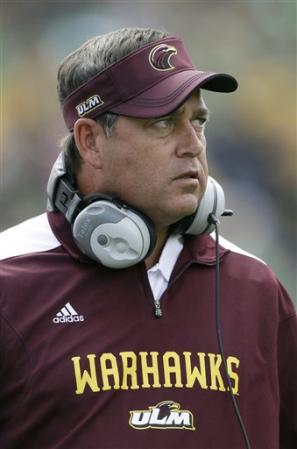 In other Sun Belt news, Louisiana-Lafayette coach Mark Hudspeth ranked the Broncos No. 11. You know what this means: War on the Sun Belt! I demand a home-and-home with Arkansas Directional.

In national matters of importance, Air Force head coach Troy Calhoun's ballot is coming under some rather significant fire. Calhoun was the only coach to have Oklahoma State as low as No. 5. Almost everyone else had the Cowboys at No. 2 or No. 3.

Even worse in the minds of Boise State fans is that Calhoun voted the Broncos No. 10 on his ballot, behind Wisconsin, Michigan, and South Carolina. Didn't Calhoun play the Broncos? Was he really that underwhelmed? Does he value sound systems and video boards in his final rankings?

If you want a lesson on how to vote, observe Coach Pete's full Top 25. We know he can do no wrong (although I'm not sure why he likes Clemson so much). 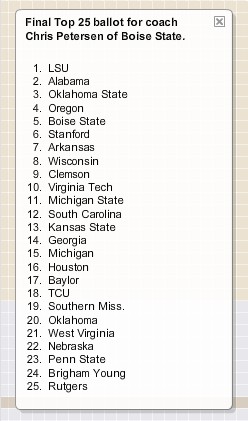 What was the most interesting thing you saw on the Coaches Poll ballots? Think Chris Petersen's Top 25 is infallible? Think Todd Berry needs to get his head (or that of his intern) checked? Share your thoughts in the comments.