Boise State playbook: Why blitzing Kellen Moore can be a very bad idea

Share All sharing options for: Boise State playbook: Why blitzing Kellen Moore can be a very bad idea

UNLV played a good game against the Broncos and still lost by four touchdowns. One reason: They blitzed Kellen Moore to zero avail. TCU might want to stick in the tape on this one and edit its gameplan.

Join me after the jump for a breakdown of two blitzes that went horribly awry for the Rebels, and feel free to share your thoughts in the comments.

On Boise State's second touchdown drive of the game, the Broncos faced a third and 12 from the UNLV 30-yard-line. Seems like a good time to blitz, right? The Rebels sure thought so as they sent six guys at Moore, hoping to force an early throw. They just didn't realize that throw might be a screen pass. 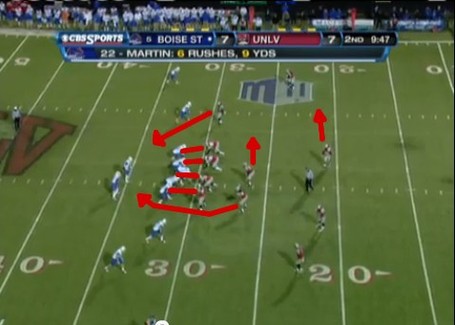 The five non-blitzers were in man-to-man coverage. At the snap, the UNLV middle linebacker followed the route of the Boise State running back to the left. The UNLV safety moved left to cover the slot receiver whose man had just blitzed. A pump fake by Kellen Moore to the running back sealed the deal.

Here is the play Boise State had going on. 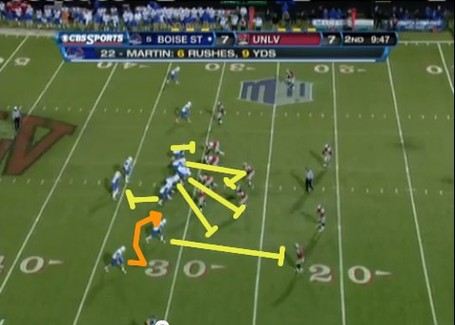 Not bad, right? Once Kellen Moore completed the pass to Matt Miller, there were only two UNLV defenders between him and the end zone. The slot receiver (Tyler Shoemaker, maybe?) took care of the corner, and Chuck Hayes chopped down the other corner. Cory Yriarte had nothing to do, so he just ran to the end zone. Next time, I suggest he demands a lateral. 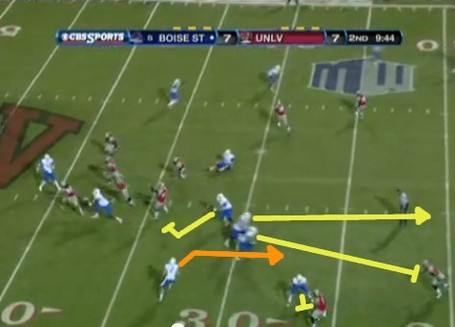 So was it just a matter of convenience that the Broncos had the perfect play dialed up against the blitz? Probably not. The Broncos gameplan relentlessly and find other team's tendencies. I imagine that the tape suggested that UNLV would blitz on obvious passing downs and third downs. Ipso facto, call a screen.

The blitz call may have even been a little hasty, too. The Broncos were at the Rebel 30-yard line, which is a good 15 yards from field goal territory for BSU. You had to figure that Boise State was going to take two tries to get the first down, so a screen or short throw was very much a possibility. Thinking: coming soon to the Mountain West.

With a one touchdown lead in the third quarter, the Broncos faced a third and 8 from midfield. Blitzing? Sure, why not.

This time, the Rebels made it pretty obvious that they were coming, and Kellen Moore - being the savant and body language expert that he is - pointed out UNLV's giant faux pas. It was hard to tell if Moore changed the play when he saw the blitz coming or if he was just confirming that the Rebels were indeed screwed. Either way, Shoemaker scored on a relatively easy catch and run. 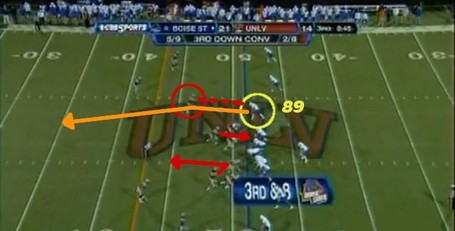 You can see the middle linebacker coming on the blitz, which left the middle of the field wide open. The ROLB faked a blitz and dropped back, but he was nowhere near close enough to Shoemaker to do anything constructive.

The great throw and the great catch and run were helped along by some poor positioning by the UNLV corner. The screenshot below was taken at the snap, and notice how far inside the corner lets Shoemaker line up. 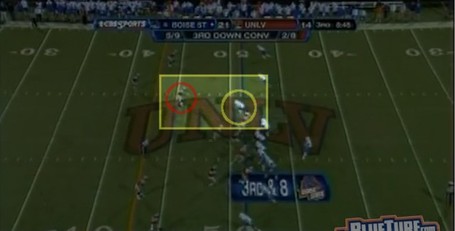 With this type of positioning, Shoemaker and Moore could throw that inside route all day. No doubt the two Broncos knew this, which is how things ended up the way they did. Moral of the story: Don't be stupid and blitz Kellen Moore and leave your corners vulnerable to easy big plays.

What did you notice in Saturday's Bronco - Rebel game? Think blitzing Kellen Moore is always a bad idea? What theories do you have on stopping the Bronco offense? Share your thoughts in the comments.