Top 25 analysis: Wondering what could have been with a Top Ten TCU

Share All sharing options for: Top 25 analysis: Wondering what could have been with a Top Ten TCU

Two months ago, Boise State fans were high on life, talking trash to would-be SEC opponents, and anxiously anticipating its week-one showdown with Georgia and its week-eleven date with TCU. A schedule with frontloaded and backloaded ranked opponents? Give Gene Bleymaier an extension (too soon?).

It wasn't to be, as TCU was unwilling to cooperate in losses to Baylor and SMU. Now the Horned Frogs enter Bronco Stadium as a fringe Top 25 team, and one has to wonder: What would this weekend have looked like if was who we thought they would be? Join me after the jump.

TCU began the year ranked No. 14 in the AP poll and No. 15 in the coaches. Had the Horned Frogs kept winning, they likely would have been the No. 6 team in the country and could have possibly been above the Broncos at No. 5 if the voting public valued a schedule with Baylor, SMU, and BYU higher than one with Georgia, Toledo, and Tulsa.

Gary Patterson wouldn't have eaten himself into an obese video game character. 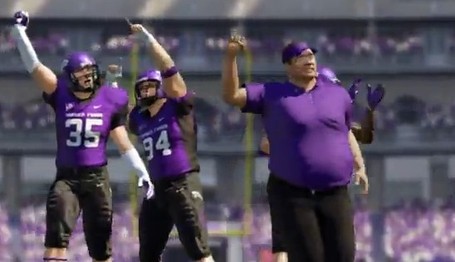 College Gameday would have been an option for the No. 5 and No. 6 teams. Instead, Gameday is headed to Stanford for the Oregon - Stanford matchup. Other options for Gameday this weekend would have been Penn State - Nebraska and Auburn - Georgia.

And perhaps most interestingly, if Boise State would have beat the Horned Frogs, the Broncos would have cemented their status as the No. 5 team in the country - or better. As it is, there are rumblings that Oregon may jump the Broncos if the Ducks beat Stanford this weekend.

The only thing stopping the LSU Tigers from being the undisputed No. 1 team in the land, according to the AP poll, is LA newspaperman Scott Wolf who kept the Broncos in the top spot despite a glut of Mountain West teams on the Broncos' schedule and a certain Game of the Century win, ergo Win of the Century, by the Tigers. Guess someone is not impressed by 9-6 overtime games. 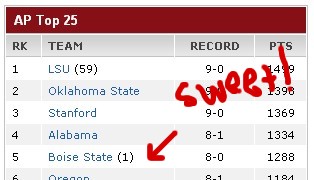 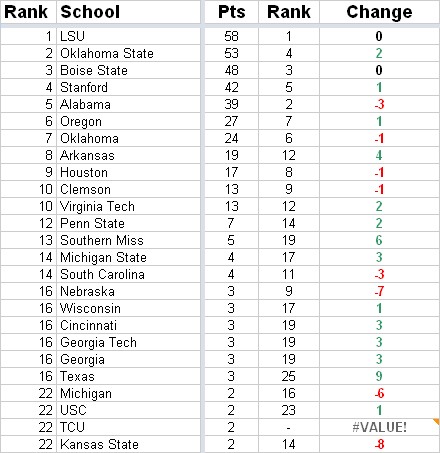 What to do with Houston? OBNUG voters don't have any problem putting the Cougars in the Top Ten, probably because we Bronco fans get Houston. It's not easy blowing out conference opponents week in and week out, no matter how awful those opponents are. The Cougars are undefeated and that's good enough for us.

So what's separating Houston from a Top Five spot with the country's other undefeateds? At the very least, why aren't they right behind the Broncos?

Well, there are a couple of reasons. The first is that Houston lacks the convincing win that Boise State has. The Cougars's signature win of the season was a four-point victory over UCLA. Yes, that UCLA. It's unfortunate that no one will take Houston seriously because of its schedule, and it's a cross that Boise State has had to bear for years.

And there's the second part. Boise State has been beating good teams and going undefeated and dominating its schedule for years. Houston hasn't. A funny thing happened when Hawaii made the Sugar Bowl in the 2007 season and lost the Sugar Bowl - people stopped trusting non-BCS teams that weren't Boise State, TCU, or Utah. I get the sense that no one trusts Houston at this point, either.

How does the OBNUG poll look? Any teams that need to go up? Any that should go down? Share your thoughts in the comments.