Share All sharing options for: Game balls for Boise State versus UNLV

The Broncos improved to 8-0 on the season with their win over UNLV on Saturday night, and a certain left-handed quarterback set a certain all-time wins record. Apart from the first half Pepto-Bismol scare, this game was all right.

Join me after the jump for a review of the best players, plays, and performances from Saturday night's game, and feel free to hand out some gameballs of your own in the comments.

As far as voting goes, this week's player of the game vote was as easy as picking that blue M&M back in the 1990s. Of course it went to Kellen Moore. Not only did he set the all-time wins mark for college football, he singlehandedly carried the Bronco offense for three quarters. He finished 18-of-31 for 219 yards and five touchdowns, and his numbers could have been even better had he played all four quarters and had Tyler Shoemaker's hands made the trip.

Gameball for word of the game

In addition to setting records and picking apart secondaries, Kellen Moore is now the object of made-up words. Coolbeansauce!

Gameball for special teams play of the game

The strength of the UNLV football team is its special teams, so I'm not really sure we're using the word "strength" correctly. Two big special teams plays - one in the first half and one in the second - led to Boise State touchdowns and Bobby Hauck sideline rage fits. The first was from the Hout who was allowed express lane access to the punter and got there so fast the poor guy had no choice but to crumple into a ball of surrender. The second was a perfectly called and perfectly executed fake by J.C. Percy who called his own number and took the direct snap for 20 yards and a first down. The only bad part about Percy's fake was the four times that play-by-play man Jeremy Bates told the anecdote about Coach Pete calling Percy the smartest man in Boise. We get it. He has a lot going for him. Move on.

Inspired UNLV performance of the night

The UNLV quarterback wasn't exactly setting the world on fire, but in the pantheon of UNLV quarterbacks, simply hitting receivers in stride and picking up consecutive first downs is something to write home about. Herring made a number of solid plays in the first half, perhaps none bigger than the third down throw on UNLV's sixth play that got the drive going to tie the game at seven. There were other highlights, too, before his magic ran out and the Broncos knocked him out of the game (on a clean hit, might I add). 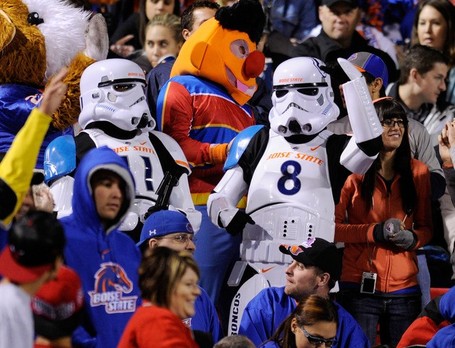 Most timely playcall of the game

The timing of the playcall was so good - a jailbreak screen to the blitzing side of the defense - that center Cory Yriarte, with no one within 20 yards to block, beat Matt MIller to the end zone. You know on Tecmo Bowl when the offense chooses one play and the defense chooses the exact opposite of that play and it always results in a touchdown? Yeah, it was kind of like that. 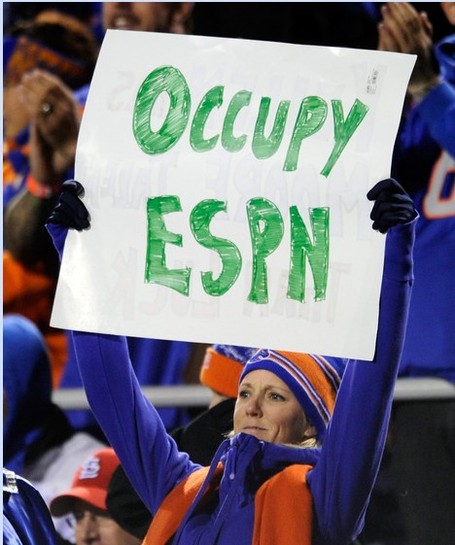 Harper took over for an injured Doug Martin midway through the second quarter and finished with his first 100-yard game since 2007. His 109 yards on 13 carries make it seem like the Bronco ground game was clicking, which it wasn't. At least not until the second half when Harper found his groove, the O-line started pushing people around, and Boise State took control of the game.

Did you like seeing Harper as the team's main running back on Saturday night? Good, because you're going to see a lot of him next year.

Best worst game of the season

Sometimes it is hard to distinguish between Bronco fans yelling "Shoooooe" and Bronco fans yelling "Boooo," especially on Saturday night when Shoemaker was doing things to make them yell both. He was in the drop zone for a good two-plus quarters (official stats have him with three drops, which is a thrifty total) before turning it on late with a 51-yard touchdown grab and a five-yard score off a deflected pass. In a "what have you done for me lately" view, Shoemaker is the best! In a full-game recap, Shoemaker has had better.

What was your favorite play, player, and performance from Saturday night? Got any nice things to say about Kellen Moore that haven't already been said? Who needs a gameball who didn't get one? Share your thoughts in the comments.