Boise State came out of their bye week unscathed and now head to Vegas to try to beat up on the Rebels of UNLV. UNLV is coming off a close victory over Colorado State and would like nothing more than to spoil the Broncos season. Will it happen? No...but that doesn't mean we shouldn't do our due diligence and take a closer look at UNLV and their sleepy little town in the Nevada desert.
What the heck...let's get to know our enemy.

10) Las Vegas, Nevada was established in 1905 and incorporated in 1911, but it had been a stopover for European explorers and westward settlers all the way back to the mid-19th century. The name Las Vegas was given by Spaniard Antonio Armijo and either means "the meadows" or "$2.99 Seafood Buffet". Early on, the city was a lot less glitzy and a lot less crimey. In fact, early on the settlement was rather Mormony—with Brigham Young deploying scores of missionaries to the area to convert the Paiute Indians (rather than bring gifts of blankets, they brought Jell-O casseroles and funeral potatoes). It wasn't until the '30s and '40s that Hoover Dam workers and later Manhattan Project workers helped fuel the "entertainment" aspects of the desert oasis. Legitimate businessman* Bugsy Siegel funded most of the original gambling dens in the city and would be quite put out to see what Celine Dion has done to the joint.

8) UNLV adopted The Rebels as their official nickname on or around 1969, and according to wikipedia legend did it to take a bit of a dig at their northern rivals, the University of Nevada-Reno. Of course, the school reasoned that the best way to do this would be to adopt a mascot wearing a confederate army uniform...because that doesn't have any other connotations whatsoever. The original mascot, an anthropomorphic Wolf, was named Beauregard, but he's since become human and renamed "Hey Reb!" I believe this moniker came about when an administrator overheard the following exchange on the sidelines of a football game: "Hey Reb! Can you move out of the way? I'm trying to watch some terrible football." 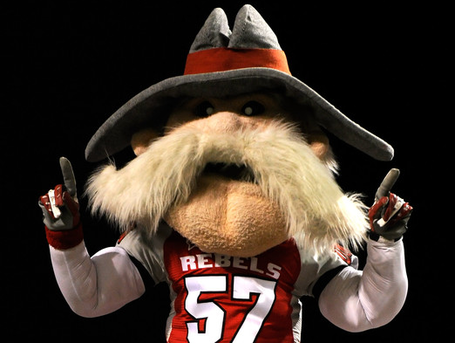 7) UNLV played their first collegiate football game in 1968 with coach Bill "Blarney Stone" Ireland at the helm. The team went 8-1 that first year—which merely served to get everyone's hopes up as they've only notched 18 winning seasons in the subsequent 42 years. Of course, the winningest coach in their history was near and dear to Bronco hearts—coach Tony Knap, who notched 47 victories with the Rebels...a tally that no other UNLV coach has even come within striking distance of. The late coach racked up 71 victories at Boise State—making him the winningest coach at BSU as well since they became a 4-year school in '68. Chris Petersen will draw within 2 wins of Knap's record with a victory on Saturday...ah well, not every record can fall against UNLV.

6) Football player and iconic shuffler Ickey Woods played his college ball at UNLV. Ickey's real name was Elbert, but that didn't stop him from becoming an All-Pro in 1988—his rookie season—and rushing for 1,066 yards and 15 TDs. Sadly, his knees couldn't support his constant shufflin' and he was out of the league by 1991—leaving us with nothing left to entertain us in Cincinnati except the grueling Esiason Two-Step.

5) Jerry Tarkanian looked like Uncle Fester, had an odd habit of biting towels on the bench, and may have allowed a prominent gambler to win over recruits...but the dude could coach. Tarkanian arrived at UNLV in 1973...just 3 years after the school's athletics programs had joined Division 1 and built the team into a national powerhouse. Tarkanian took the Rebels to their first Final Four after just 4 years on the job and led them to 3 more before leaving the school (in shame, I might add) in 1992. The Runnin' Rebels won the title in 1990 by destroying Duke 103-73...a beating that would leave Bobby Hurley permanently weird-looking. Tarkanian left the school amid allegations of running a dirty program...just like he did after coaching at Fresno State. Bummer...otherwise that legacy would've been as sterling as Bobby Knight's...oh wait. 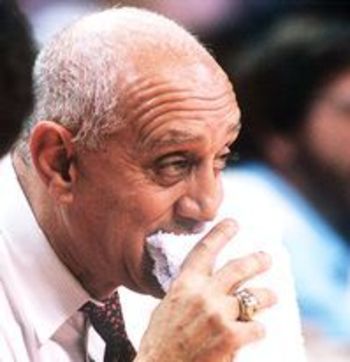 "The higher the thread count, the tastier the towel."

4) UNLV's oldest and bitterest rival is their northern counterpart, the University of Nevada-Reno (and frankly, I'm not that fond of them myself). The Rebels have played the Wolf Pack, nearly uninterrupted, since 1969...with 15 of the contests going their way and 22 going to Reno. Annually, the two squads play for the Fremont Cannon—an actual cannon donated to the schools by the Kennecott Copper Corporation. The cannon is named after famed(?) explorer, politician, military officer, and general doer-of-things John C. Fremont, who legend has it, left a similar such cannon in a snow drift in the Sierra Nevada mountains. The cannon used to be completely functional prior to 2000, but UNLV fans attempted to lift the nearly 600 lb. armament after a victory over Nevada and subsequently dropped it (sadly not trapping Chris Ault underneath). This butterfingers move earned UNLV fans the Al Borges Award for failure to "act like you've been there before."

3) UNLV's school of engineering bears the name of famous aviator, director, rich guy and weirdo Howard Hughes. Hughes connection to UNLV can probably best be traced to the end of his life, when his reclusive lifestyle and crippling OCD led him to take up residence in the famous Desert Inn in Las Vegas. Hughes originally was supposed to stay at the hotel for 10 days, but when checkout time came and the staff got impatient, Hughes pulled a Bruce Wayne and just bought the hotel outright, then lived there for another 2 years...2 more really creepy years. 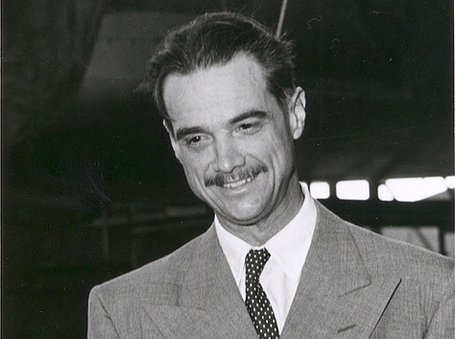 2) The Rebels play their home football games at Sam Boyd Stadium (capacity 36,800). The stadium was built in 1971 and named after Sam Boyd...a prominent Las Vegas businessman whose life was kinda like Robert Deniro's in the move Casino, except with far fewer car bombs. Actually Boyd worked his way up the Las Vegas ladder from dealer to pit boss to shift supervisor finally reaching the pinnacle—operating a Plinko! game. Boyd Gaming Corporation is now a multi-billion dollar company, but the Boyd family could lose it all by betting on UNLV this weekend.

1) In 1967 Evel Knievel was in Las Vegas to watch a middleweight title fight when he gazed at the fountains in front of Caesar's Palace and quipped "what a magical place to break every bone in my body". A few phone calls were placed and on December 31st of the same year, Knievel got his chance to show the world what it would look like if a human's body was made of gelatin. The following footage is of Knievel's slightly less-than-successful jump. 7 years later, Knievel attempted to jump the Snake River Canyon outside of Twin Falls, Idaho (and failed). Because of these two events, Idaho and Las Vegas are inextricably linked as two places that Evel Knievel valiantly tried to pulverize himself in front of a TV audience.