Share All sharing options for: O Kellen! My Kellen! 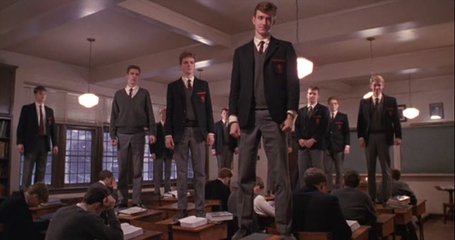 With Senior Day this weekend on the Blue, we'll have to say goodbye to our fair share of Broncos—but likely none will be missed like our captain, and leader—Kellen Moore. Moore is easily the most decorated and universally praised player to ever grace the Blue™ and that's why I've penned him this poem. Many thanks to Robin Williams and apologies to Walt Whitman.

O Kellen! My Kellen! Our awesome trip is done;

Your team has weather'd every game, and nearly all them won;

The end is near, the whistle I hear, and cowbells all a-clanging,

for touchdowns passed, and wins amassed, and finger guns a-banging:

O the beating of the Lobos,

As if they were mere Hobos.

O Kellen! my Kellen! Rise up then take a knee;

Or throw to Kirby, Matt or Shoe…but just don't throw to me;

The best—years one through four;

And when the record books are struck,

Our mop-haired Opie on the Blue—the spot won't be the same;

You looked a boy, but pass'd McCoy—a first in this man's game;

So we hoist eleven to the rafters and shout "Huzzah!" to you;

If t'were up to me (and I had the green) we build a KM statue!

But bow a sorrowful head,

Kellen lives on, but his eligibility's gone;

His time as a Bronco—dead.