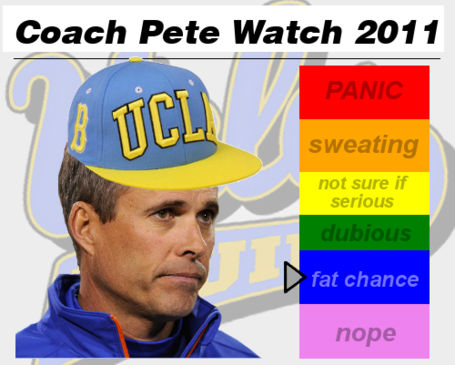 Tis the season for hard luck college football teams to come a-courting for new coaches, and as per usual, Chris Petersen's name is at the top of pretty much everyone's wish list. To get things started, the UCLA Bruins are reportedly interested in hiring Petersen to replace Rick Neuheisel, like, yesterday, and to prove how serious they are, Bruin athletic director Dan Guerrero will be traveling to Boise with pockets full of cash to woo Coach Pete away.

We are currently at Threat Level Fat Chance.

From the sound of things, UCLA is prepared to offer Coach Pete $3 million in annual salary, promises of improved facilities, and a couple cool mil for his assistant coaches. They would also be offering a quality of life akin to Mordor. And if all this UCLA talk has you thinking deja vu, there's a good reason for that.

If and when Coach Pete turns down the Bruins, UCLA is expected to turn its attention to Houston coach Kevin Sumlin and Monday Night Football analyst Jon Gruden. Failing that, I hear Tom Cable - yes, that Tom Cable - is also a candidate. Oh UCLA, never change.

Arizona State is looking for a new head coach. Any suggestions?

The Sun Devils fired Dennis Erickson this week and now turn their attention to someone other than Dennis Erickson. Seriously, I'm not sure if they had anyone else in mind when they fired him. They just really wanted Erickson gone.

Coach Pete's name has yet to surface as a serious candidate, and when or if it does, we will all be sure to have a communal belly laugh. 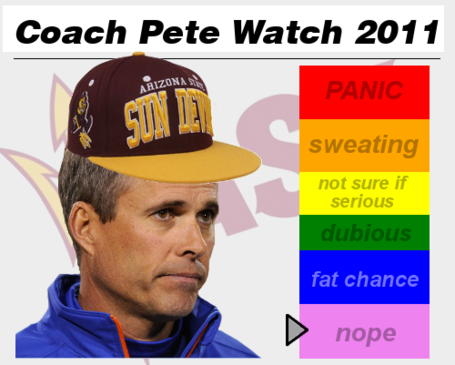 Due to its proximity to the state of Idaho and its status as a Pac-12 school, Washington State will likely be connected to Coach Pete rumors some point soon after the firing of Paul Wulff is made official today. There is still a slim chance that Wulff will remain on the Palouse, provided he doesn't show anyone any film from any of his Wazzu teams.

A Seattle newspaper site is reporting that Mike Leach would be an excellent candidate for the Cougars job, so here's hoping that happens for WSU because the Coach Pete thing never will in a million years. 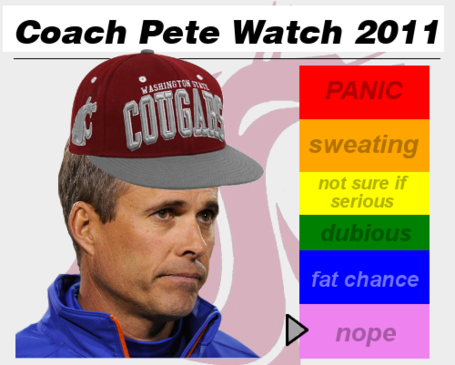 (HT: Mikrino and others for the coaching rumor news)

How likely do you think it is that Coach Pete takes an interest in the UCLA job? Are there any rumors out there that you worry about? Can you even imagine him going to Pullman? That's hilarious! Share your thoughts in the comments.