Gameballs for Boise State versus Wyoming

Share All sharing options for: Gameballs for Boise State versus Wyoming

The Broncos topped the Cowboys on Saturday to move to 10-1 on the season and keep their BCS hopes alive for another week. Three cheers for winning and for dreaming and for sticking it to a Wyoming team that did not want to go away easily.

Join me after the jump for a rundown of the game's most memorable players, plays, and performances, and feel free to share your thoughts in the comments.

When the going got tough for the Bronco offense, the Bronco offense handed the ball off to Doug Martin. His 150 yards and two scores provided much-needed momentum and rhythm for BSU until Kellen Moore and the passing game clicked. That Martin did it at probably not 100 percent is even more incredible. Or maybe the Wyoming run defense is just that bad. Hard to tell.

Defensive player of the game

The senior safety made the most of his starting role, finishing with a career-high nine tackles, an interception, and a forced fumble. And for his efforts he was named Mountain West co-Defensive Player of the Week - one of five footballers to get MWC awards last weekend. He's somewhere in the picture below, I think.

When the going gets tough, NFL-ready safeties move to cornerback. Such was life for George Iloka on Saturday who filled in at the corner spot so admirably you would have hardly known he was out there. The Cowboys tested Iloka once, getting a 28-yard completion by inches and video replay. Wyoming spent the rest of the day on Iloka Island.

Game ball for best running back in a receiving role

Boise State's leading receiver on Saturday, receptions-wise, was Harper who finished with five catches for 51 yards. How and why? Well, it helped that Wyoming often failed to cover him when the Broncos went to their no-huddle, hurry-up offense. It also helped that Harper caught the ball when Moore threw it to him and helped keep the offense in rhythm. Harper had two catches on Boise State's first touchdown drive and two catches on the Broncos' fourth TD drive. I hear he runs the ball pretty well, too.

The Wyoming head coach is on the short list for the Mountain West Coach of the Year and for many national awards. Here's hoping no one got The Mtn. channel and saw his late-game strategery. It was odd, to say the least.

With the Cowboys down by four scores with a full 13+ minutes left in the fourth quarter, Christensen elected to put backup QB Sam Stratton in and take the air out of the ball. Wyoming went on an eight-minute, 15-play drive, the first nine plays of which were runs. 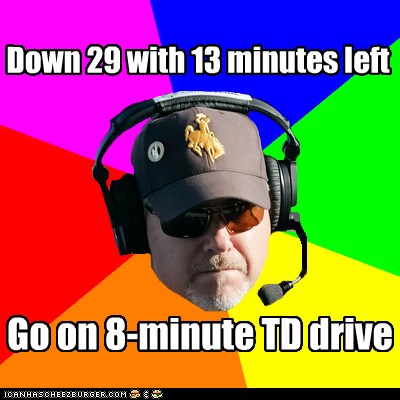 The drive did end in a touchdown, cutting the Bronco lead to three scores. So for an encore, Christensen did the opposite of what any aggressive, reasonable coach would do with the ensuing kickoff: He kicked it deep. 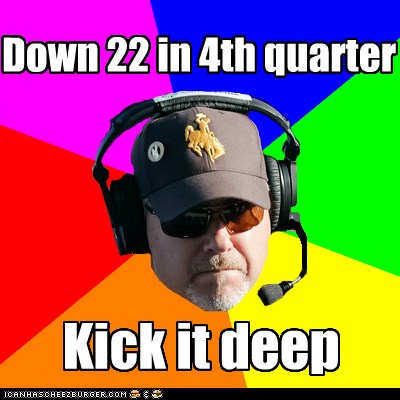 How very Pat Hill of him.

Overrated freshman quarterback of the game

If only we could have back the ink and paper and hours spent writing rave reviews of Smith leading up to the Bronco game. He was serviceable at best and Tyler Lantrip at worst.

Keeping in mind the fact that he wasn't even supposed to be playing in this game with an injury, Crawford made one of the game's biggest plays by forcing a fumble by Brett Smith with the Cowboys driving for a second score. Had Smith completed the play by simply falling into the fetal position, the Cowboys were looking at a 40-yard field goal and a 10-0 lead. Crawford's chasing Smith down from behind for the strip gave the Broncos the ball, and Boise State scored to tie the game 17 plays later.

Hail Mary of the game 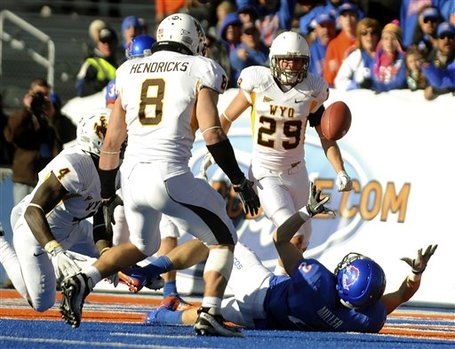 A bit of an overreaction? Yes. An accurate reflection of a fair number of Bronco fans? Also yes.

What players, plays, or performances do you feel deserve a game ball? Share your thoughts in the comments.