The Boise State basketball team gets its first real test of the season (no offense, Utah) with a trip to Long Beach State tonight to face a 49ers squad that has already pulled one of the biggest upsets of the college basketball season. Expect to learn more about the Bronco basketball team tonight than you learned against Colorado Christian.

Tip-off is at 8:00 p.m. MT, and you can listen live on the radio at 670 KBOI. To get you jazzed about the game, here is a preview of what to know about Long Beach State and the Broncos.

1. Long Beach State defeated No. 9 Pittsburgh last week to end Pitt's 58-game non-conference home winning streak. The 49ers followed up that win with an overtime loss at San Diego State, one of the Mountain West's best teams. So the lesson here is that LBSU is pretty good at the basketball.

3. Long Beach State point guard Casper Ware ranks sixth in the country in scoring, averaging 24.7 points per game. He is one of four senior starters and one of three 1,000-point career scorers on the 49ers team. Embarrassment of riches much?

4. The Broncos hit the road for the first time tonight, and they do so with some pretty impressive national statistical rankings. BSU is third in the country in scoring average at 92 points per game and 11th in the country in field goal percentage, shooting 52.9 percent. The Broncos aren't too shabby from three-point land, either. Their 44 percent shooting from beyond the arc is good for No. 22 in the country. Playing Cal State Northridges will do that to you.

5. Long Beach State plays its basketball in the Big West Conference, which is one of the potential landing spots for Boise State's Olympic sports should the football team get its rear in gear and join the Big East already.

Bonus thing: Long Beach State plays in the Walter Pyramid, which is an actual pyramid. 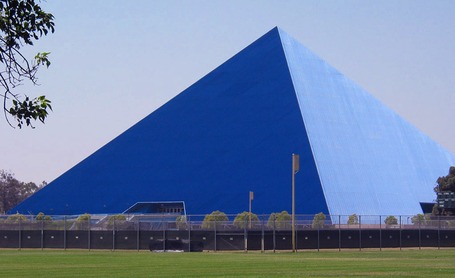 What are you expecting to see from the Boise State basketball team tonight? Do you think the Broncos can pull the upset? Can they keep it close? Share your thoughts and predictions in the comments.