How Boise State can make a BCS bowl

Share All sharing options for: How Boise State can make a BCS bowl

With only two weeks left in college football's regular season, Bronco Nation is ready to take the next two wins for granted and start making bowl plans. But plans to where?

A BCS bowl is obviously Boise State's first choice, and the likelihood of bowling with the big boys is still decent. With the way teams are tumbling willy-nilly in the polls, the Broncos might just end up in a BCS game after all. No one else seems to want to.

How can the best case scenario come to fruition? Thinking happy thoughts and knowing what kind of cheeses Fiesta Bowl execs enjoy would be a start. There's also a good, old-fashioned BCS breakdown.There are five BCS bowls and 10 teams needed to fill those bowls. The selection process could look like this.

The remaining teams fighting for the final two spots are a second Pac-12 team, a second Big Ten team, a second Big 12 team, and Boise State. In order to be considered for at-large selection, a team must be in the Top 14 of the BCS standings. Beer me that BCS chart. 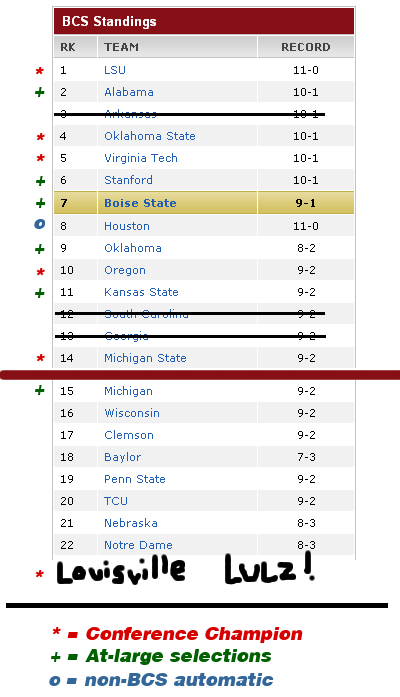 Stanford gets an at-large bid. The Cardinal play Notre Dame this weekend in their regular season finale. Win that game, and Stanford would be a very attractive at-large choice for the bowls due to the Andrew Luck factor (which has yet to be scientifically or statistically quantified as a thing).

If Oregon State beats Oregon this weekend, then Stanford would play in the Pac-12 title game and Oregon would likely fall out of the BCS entirely. This would help Boise State.

The Big 12 gets an at-large bid. The Big 12 champion will go to the Fiesta Bowl, and that champion will be decided when Oklahoma and Oklahoma State play on December 3. If Oklahoma loses, the Sooners would likely fall out of BCS contention, and Kansas State would be the Big 12's best remaining at-large option.

Michigan gets an at-large bid. If the Wolverines beat Ohio State on Saturday, they would likely climb into the Top 14 and be eligible for an at-large selection. Michigan did not qualify for the Big Ten championship game, so their season is over after Ohio State. The Wolverines figure to be selected as an at-large team in this scenario.

Boise State gets an at-large bid. The best case scenario for Boise State is to have as few eligible at-large teams in the pool as possible. So the Broncos have to hope that in two weeks, the Top 14 is crammed full of SEC schools and three-loss teams.

Ultimately, the Broncos' BCS chances figure to come down to a BCS bowl choosing among Boise State, Stanford, and a second Big 12 team for one final spot. If only the Fiesta Bowl were still taking bribes!

Here is a projected BCS as things stand today. After the Sugar Bowl picks a replacement for its lost SEC champion, the picking / pecking order goes Fiesta, Sugar, and Orange. Conference champions and therefore fixed picks are in bold (except the Big East champ, which has no guaranteed bowl).

Oklahoma State vs. Boise State or Stanford or Kansas State

In the above scenario, you'd have to think that the Fiesta would not want a Big 12 matchup (although who knows how the Fiesta thinks anymore). In that case, the choice would be between Boise State and Stanford. Let the Andrew Luck smear campaign begin.

We begin with the most awful ...

The Independence Bowl has several things not going for it: a) the bowl takes place in Shreveport, Louisiana, home to nothing of consequence to an Idaho resident, b) the bowl takes place the day after Christmas at 3:00 in the afternoon, and c) Boise State is matched up with the No. 7 choice from the ACC. What's next? Craig James on the call?

And now for the second most awful ...

With LaTech's three-TD fourth quarter comeback win over Nevada on Saturday, the Bulldogs are now the top team in the WAC and in the running for a spot in San Diego's P-Bowl. Had Nevada beat LaTech, the Wolf Pack would have been San Diego bound and Boise State would have never in a million years been chosen for a rematch.

The thought of playing LaTech in a bowl game seems to make Bronco fans cross-eyed with anger. I'm not vehemently opposed to it (LaTech is a good team), but it does make me sigh every time I hear it.

If a BCS bowl cannot happen, then Boise State would very much like to be a part of the Las Vegas Bowl, particularly because it means not being a part of the Poinsettia or Independence Bowls. Vegas has the first choice of Mountain West teams, and it figures to come down to choosing a conference champion in TCU or a Top Ten school that is guaranteed to travel well in Boise State. Choose wisely, Vegas Bowl. I do not want to fake excitement for a Wake Forest game.

The Division I-AA schools came out with their playoff bracket over the weekend, and I just about wept. It was so beautiful and made so much sense. Why can't we have one of our own? Here's the one I would want, based on my favorite playoff format (16 teams, 11 conference champions, five at-larges, seeds from the AP). Conference champs are in italics, even the WAC one.

How do you feel about Boise State's BCS chances? What bowl would be worse: P-Bowl versus LaTech or Indy Bowl versus an ACC also-ran? Share your thoughts in the comments.