Saturday afternoon, the TCU Horned Frogs picked on the Bronco pass defense to the tune of 473 yards, five touchdowns, and one big, fat Boise State loss. After the jump, I break down just how TCU's sneaky, tricky double moves took place and how the Horned Frogs drew it up against the Broncos. Plus, Boise State scored some touchdowns that were worth diagramming, too. Feel free to add your thoughts and breakdowns in the comments.

Sick of seeing the Bronco secondary look like a bag of doughnuts? Jump down to the bottom for happier Bronco TD stuff.

TCU touchdown pass No. 1: The out-and-up

I should probably note that double-moves are rather plainly named, so you can probably figure out what TCU receiver Josh Boyce did to Bronco corner Ebo Makinde on this play. Boyce ran an out. Then he ran up. 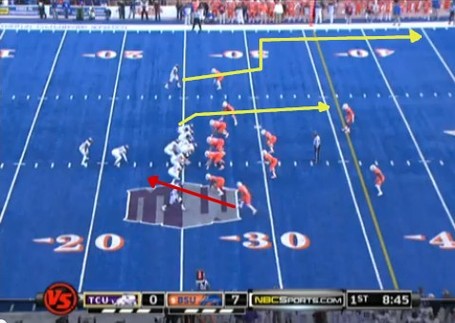 As you can see from the above diagram, the Broncos brought a corner blitz from Jamar Taylor off the bottom. It did nothing. The Horned Frogs kept their running back in on the play and slid the line blocking assignments down to the offense's right. So the right tackle kicked out and picked up Taylor, the running back took the opposite side DE, and Pachall had all day against the Boise State five-man blitz. 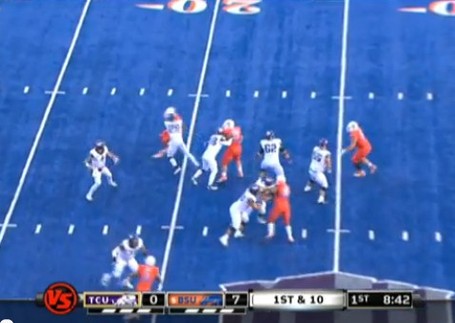 (Note: That is not how you hold a football, unless you are Tim Tebow. Keep it at your ear, Mr. Pachall.)

George Iloka was the safety to the wide side of the field, and it is hard to tell what coverage he was playing. It appeared as if he was hugging the tight end's route (some sort of slow man seam). He may have seen Josh Boyce begin an out route and forgot about him. Or it could be that Makinde simply had Boyce one-on-one.

TCU touchdown pass No. 2: The slant-and-go

Truly, Brandon Carter's route was more of a post-and-go, although the slant-and-go term generally covers most varieties of this route. 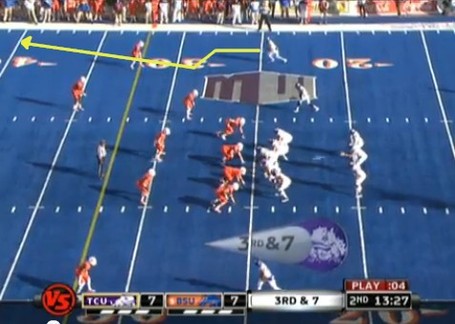 The down-and-distance played a big part in the success of this play, as Makinde had to be thinking that Carter was going to run a route to pick up first down yardage. Sure enough, Makinde jumped the post route, and he jumped it like he meant it. Had it actually been a post, Makinde would have clearly broken up the pass or made the pick.

But of course, we all know it wasn't a post. As soon as Makinde drove forward, Carter sped behind him for the pass. 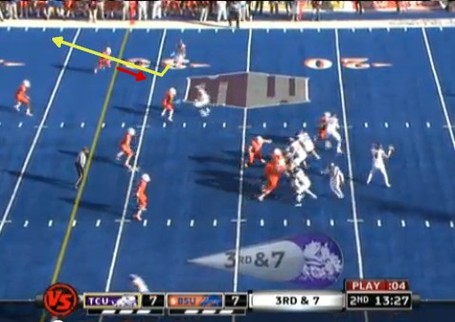 The Broncos brought straight four-man pressure and didn't get to Pachall. The safety to Makinde's side (looked like Iloka again) focused more on the post-and-go from the inside receiver and was in no position to help Makinde on Carter. The fact that Carter took his route to the sideline also limited the ability of the safety to help on the play.

Trick question. Double posts is not a double move. It is just a pair of post patterns run on the same side of the field by two different receivers. 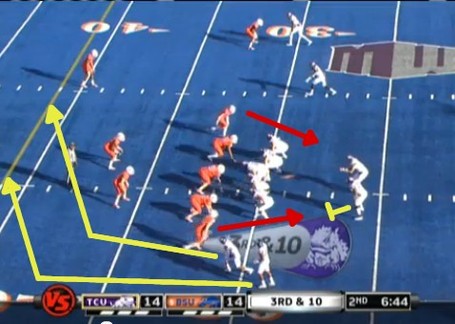 The outside post by Josh Boyce (the one nearest the sideline) is the one Pachall threw, and it was asking a lot of Lee Hightower to stick with Boyce on this play. The inside post took safety Cedric Febis with it, so Hightower was all alone. 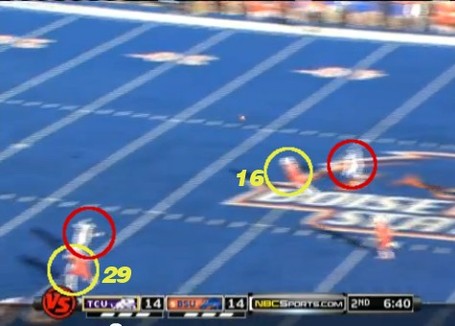 Whether or not this applies to this play, here's a bit of cornerback advice I picked up over the years of football-watching. When a corner is in man-to-man coverage, he should use the sideline to his advantage by shading the receiver to the inside. That way, the inside throws are well-defended and the outside throws have to be fit between the corner and the sideline. Again, I'm not sure what Hightower's technique was supposed to be on this play, but whatever he did, it didn't work. There was a good five yards of separation. 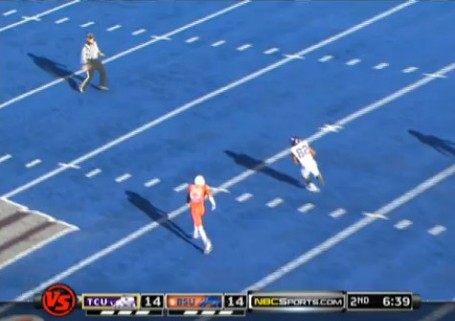 Meanwhile, back in the pocket, the Broncos brought a five-man blitz to pressure Pachall, and it didn't work. Shea McClellin was stoned by the TCU running back. 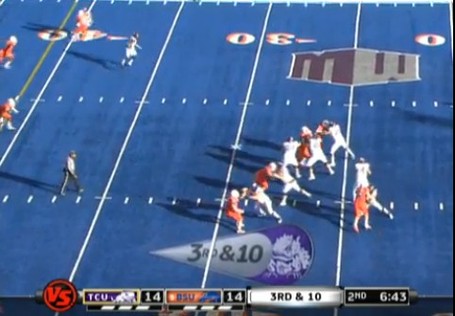 TCU touchdown pass No. 4: The post-corner

Technically, this was TD pass No. 5. I didn't do No. 4 because it was boring.

The post-corner is a common route in the passing tree, and it is one that isn't typically thought of as your standard double-move, mostly because you don't always see QBs pump-faking on it. Plus, the two parts of the double move take place farther downfield. Never the mind, it still worked against Boise State. 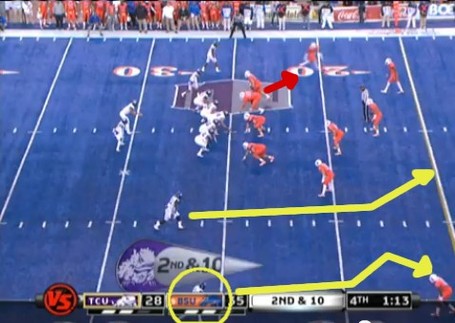 I can't be sure, but I believe the play is a variation of the double posts play that TCU ran for its third touchdown pass. The inside receiver seemed to be running a post route (run upfield and cut 45 degrees toward the goalpost). If that's the case, it's a brilliant playcall since Boise State had been burned on double posts already.

Quaylon Ewing-Burton bit on Brandon Carter's post move and was completely turned around by the time the corner part of the post-corner arrived. Had Pachall not been blasted as he threw (against a three-man rush this time), Carter would have caught the touchdown uncontested. 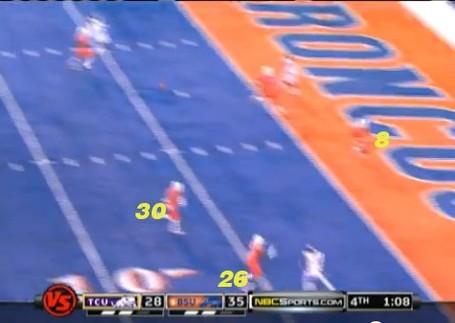 The coverage was definitely Ewing-Burton, although you'll see in the screencap above that Travis Stanaway (30) and George Iloka (8) were both running over late. I believe they were just leaving their coverages to help out, fruitlessly.

So where was the safety help for the young corners?

No one knows, and no one is saying. That will go down as one of the great mysteries of this game and will be something Bronco fans will just have to live with. There is no obvious answer why Bronco corners repeatedly got beat deep.

I do know that Boise State's base defense is not the common two-deep zone with man coverage underneath that you see in video games and on TV. The Broncos align their defense to the wide side of the field (Field) and the narrow side (Boundary), and the back seven defenders - corners, safeties, linebackers, and nickel - have varying responsibilities depending on the routes that develop. I wish I knew exactly how it works, but I don't. Just know that it's not as simple as George Iloka should never let anything past him.

Marty Tadman had some thoughts on the coverage on his Marty Tadman blog, and his suggestion for a fix was a Bronco defense called "Apache," which is basically man coverage underneath with the two safeties as a backup for deep throws.

All I'll say is that I've heard worse ideas (like the Twitterverse demanding that WRs be cross-trained at corner).

Enough about TCU, how about Boise State! The Broncos made several nice plays on offense, one of which was a 17-yard D.J. Harper touchdown run in the second quarter. The play is a toss sweep to the left with a fake reverse back to the right. Or, as the TCU defense understood it, REVERSE RIGHT EVERYBODY! 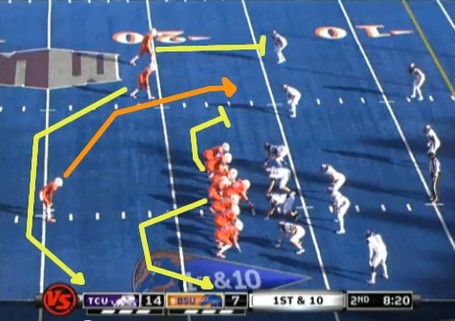 The Horned Frog defense was so thoroughly fooled by the motion of Mitch Burroughs and Kellen Moore who sold the fake to perfection that seven of the 11 Horned Frog defenders thought the play was going the other way. 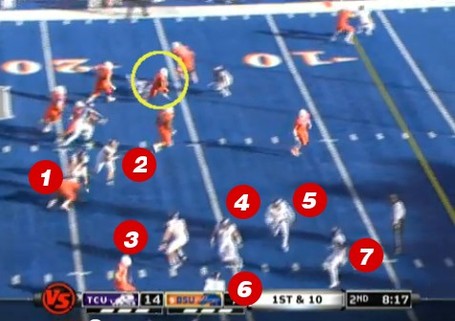 Also in Boise State's bag of tricks was its once-per-game deep ball to Dallas Burroughs, which worked for the first time all season against TCU. The play is quite simple. Burroughs runs as fast as he can and Moore tries to throw it far enough. Moore does a play action fake to D.J. Harper to keep the safeties honest, and the Broncos keep in seven blockers to give the play time to develop. 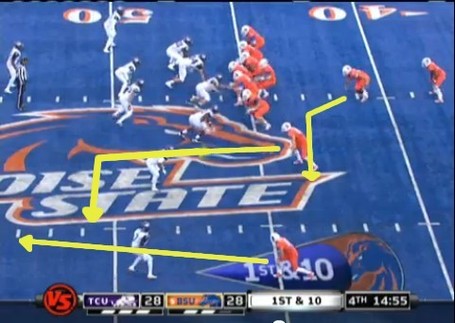 A key aspect to this play working was the block of Harper on the blitzing Tank Carder. Without Harper's block, this play doesn't happen. 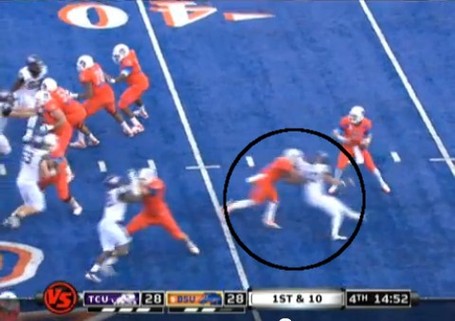 The screen grab above does not give the block justice, especially since it looks like Harper is blocking Carder in the back.

What is your analysis of double moves and the Boise State secondary? Got any theories about how Boise State's pass defense works? What was your favorite Bronco scoring play? Share your thoughts in the comments.