I have written enough about the agony of defeat over the past couple days. How about some thrill of optimism?

The Broncos may have lost to the Horned Frogs on Saturday, but they did so in captivating fashion with a fair share of amazing plays and performances that have yet to get their due. Well game balls are here to rectify that situation. Join me after the jump for a happy-go-lucky look at all the great things that happened in Broncoland on Saturday.

Gameball for catch of the game 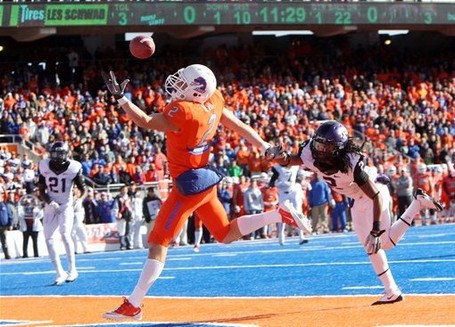 Miller's one-hand touchdown grab to open the scoring was a piece of art, meaning I think there needs to be an exhibit of it at the Boise Art Museum. Also, was it just me or did it seem like he could have caught that with two hands? Show off.

Usually when Doug Martin is not on the field, my world comes crashing down. But not so on Saturday. Instead of missing the Muscle Hamster, Bronco fans were treated to the Reconstructed Shrew, and Harper did not disappoint. His 125 yards on 24 carries were rather surprising, considering it would have taken about 124 carries to get that yardage total against previous versions of the TCU defense. Hooray and huzzah for Harper.

Gameball for most long-awaited QB-WR hook-up 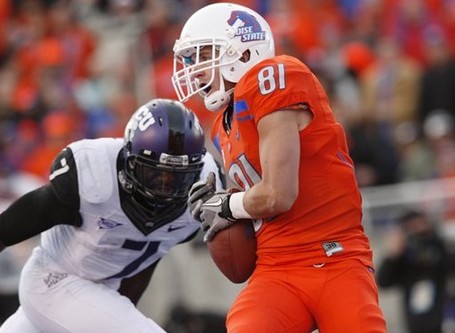 Oh, if only these guys weren't a fifth year senior and an teenage true freshman. Moore and Burroughs finally connected on a deep pass, and it went for 54 beautiful yards and a score on Saturday. More please.

Tyrone Crawford play of the game

He looked awfully natural picking up the loose ball and rumbling in for six. When you thought of NFL-ready D-line talent at Boise State before the season, you probably thought the order would be Billy Winn, Shea McClellin, then Crawford. I'm not so sure that Crawford won't be on top this spring.

Underrated player of the game

Considering he was riding pine pretty firmly until a couple weeks ago, Hightower's ascension to the Bronco defense and into the starting lineup has been about as good as you can ask for. Yes, he got beat deep on a play on Saturday, but he made up for it by picking off Casey Pachall inside the red zone, showing some pretty sure hands on the pick.

The No. 1-rated Horned Frog kick return team had six chances to return kicks on Saturday, and only once did they get outside their own 30-yard line.

What Bronco performances did you enjoy from Saturday's game? What did you see that you liked? Share your thoughts in the comments.