Share All sharing options for: Interview with a Horned Frog: Five questions with Frogs O' War

Despite my best efforts, I have a slight problem staying objective on game week. So instead of hearing things from a Boise State homer's perspective, I thought it might be nice to get some knowledge on the Boise State - TCU game from a Horned Frog fan and blogger. Purple Wimple from SB Nation's TCU site Frogs O' War agreed to some Q&A on the Horned Frogs and their matchup with the Broncos. Check it out after the jump. 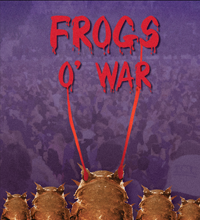 The Purple Wimple and his cast of thousands write daily about Horned Frog football over at Frogs O' War. Check them out for TCU news and info, if you're so inclined.

I"m not sure what "pitching a movie" means, so I'll just say it like I see it. Your emotions are your business. 2011 was supposed to be the year that TCU's defense carried a subpar offense, while the offense got its feet wet. This is TCU, after all, where evil genius Gary Patterson churns out #1 defenses like cotton candy; and TCU just graduated a star-studded senior class of offensive skill players and linemen, including four-year starter QB Andy Dalton, so how could the offense not skip a beat? Reports out of spring and fall practice fell right into line-- this defense is stacked and the offense... has good receivers.

And then the season began. Robert Griffin III torched the Frog defense, and the offense was... was actually pretty good, erasing a 24 point deficit in a furious fourth-quarter charge to retake the lead, only to see the defense give it back to Baylor. The disorientation in Fort Worth was immediate and intense. Since when were the Frogs bad on defense? (Answer: 2004.) Since when did evil genius Gary Patterson get sub-par performances from his secondary? (Answer: 2004) Who are all those new kids running around on the field? (Answer: the new Frog defense.) And, most often, what the heck went wrong?

The answer to that last query has unfolded slowly as the season progressed. It turns out that experience matters, even in evil genius Gary Patterson's defense. Remember safety Tejay Johnson, three-year starter, of whom the coach said repeatedly "he's like a coach on the field?" TCU hasn't found a player who replaces Johnson's on-field coaching. He was key to the Frogs' three-peat nation-leading defenses, and was only one of several seniors in the secondary to graduate after 2010. So turning a bunch of freshmen and redshirt freshmen in the secondary into the man-eating brick wall to which Frog fans had become accustomed is going to take more than a single off-season.

And improvement has begun to show. JUCO transfer Jason Verrett (#2) at corner, who failed on man coverage multiple times against Baylor, has become a shut-down corner. Safety Jonathan Anderson, backing up Tek Cuba, has blossomed. He tackles like a freight train, and is playing in the right places now. Walk-on Devin Johnson, of whom practice-watchers have long had good things to say, has become a starter and a key player in the secondary. So, this season the Frogs have been finding the right players and the right positions for players, but it's been a work in progress.

More succinctly, the offense: there are a lot of new faces, from Pachall at QB, Fry and Deck on the line, Brandon Carter, Cam White, and David Porter at receiver. All have out-performed expectations, especially Pachall. He put the team on his back in Waco, and visibly slowed by cramps in both legs, passed the Frogs to the lead. It was a very gutsy performance, and there has been no dropoff since. His pass efficiency is not in Darth Kellen's league, but it's the highest any TCU QB's has ever been in a season. I don't think anybody saw that coming. Curious, too, has been his ineffectiveness running the ball. Casey Pachall is taller, faster, and has a better arm than Andy Dalton, but he has fewer dimensions. Dalton could kill you with his feet; Pachall can't. But he hasn't needed to; and as he and his young receivers have gotten game reps under their belts, they're becoming capable of running the offense at a high tempo. Like the defense, the offense has been a work in progress; but unlike the D, it started from a much better position.

I'm not very familiar with Boise's weaknesses or places where it lacks depth, but linebacker Kenny Cain is about as good a player as there is. He's blazing fast, very hard hitting, and coachable. He worked his way into co-starting with Tank Carder, basically, and when Tanner Brock went down for the season in the first game, Cain took the reins and ran with them. He's missed some halves with injury, but has been back in for a few games, as good as ever. John Lewis (61) at defensive tackle is much the same way, only younger. For a true freshman to play (and lots) on a Gary Patterson defensive line-- that's impressive. And Lewis looks like the future of the interior of the line. He's a beast, and very productive.

But the single best player on the team might be sophomore Josh Boyce (82) at wide receiver. Boyce has been playing through a broken hand (he ripped the cast off prior to kickoff in Waco, and was the team's leading receiver that game) and likely will be the Frogs' first 1,000-yard receiver since 2003. He's an NFL talent, and fast becoming a team leader. Waymon James (32) at runningback is on the short list, too. He's powerful, fast, and hard to bring down. He'd be a 25-carry-per-game back were it not for the embarrassment of riches in TCU's backfield.

TCU's backfield is its Rose Bowl; Ed Wesley, Matt Tucker, and Waymon James are among the two or three best backfields in the nation. They all could start; they sub for each other; they're always fresh; they block well; they're dynamite. The passing game is an Orange or Sugar Bowl; not championship, but top tier. The offensive and defensive lines are Cotton, Capital One, or Chick-Fil-A bowls; underappreciated, well funded, and deep. (although Michael Thompson's season ending injury a couple weeks ago shallows the depth at offensive guard). TCU's secondary is definitely its New Mexico Bowl; it's probably better not to watch. The linebackers are the Vegas, Liberty, and SunBowl-- solid second-tier. TCU's defense doesn't put its 'backers in the limelight, so it might be unfair to cast them this way.

TCU is going to have to (1) score a lot, (2) not give Boise easy scores. Stopping Darth Kellen, especially now that he's got his full crew at receiver, is just not going to happen. So slowing them down, forcing bad throws, punishing BSU receivers and o-linemen, and if possible, hitting Moore early and often, will be how TCU beats Boise State. Has anybody done that this season (or last?)? No. Do I expect TCU to do it? No. But as much as TCU can do that, it will be in the game.

If its offense comes out red-hot and stays that way. This might be a high scoring game, and the offense that takes off for a few possessions will lose the game.

I'm about one notch above Taco Belch. How about Wendy's?

It has been harder and harder to find willing participants in OBNUG blog bets this season. The call has gone out to Frogs O' War, and I'm awaiting a reply. Keep your fingers crossed.

Update: I don't read my emails very thoroughly. The Wimple agreed to the blog bet - winning team's blog gets a free post on losing team's blog. Best of luck to Frogs O' War and TCU, and I do not mean that at all.

Surprised to hear a Horned Frog fan not uber-confident that his team will win? Scared of the TCU offense now? Feeling pretty comfortable about that TCU defense? Share your thoughts in the comments.