Top 25 analysis: Are you a fan of scoreboard watching?

Share All sharing options for: Top 25 analysis: Are you a fan of scoreboard watching?

Boise State fell behind Stanford in the latest BCS standings, which is cause for all of Bronco Nation to get out there and passive aggressively root against the Cardinal in all its remaining games. Right?

Well, that's one option. Scoreboard-watching is a classic non-AQ pastime, provided there is a point, like rankings or bowl berths or really, really hating Oregon. An alternative would be to sit back, relax, and enjoy watching Boise State football, apart from the outcomes of games across the country. Which route are you taking this year?

Scoreboard-watching is a different animal this season because of Boise State's lot in college football life and its past history of getting snubbed. Most Bronco fans would be scoreboard-watching in hopes that BSU would sneak into the Top Two in the BCS standings and get a spot in the BCS national championship game. But is that even a possibility this season?

First, there's the fact that college football has made things clear in the past that the Broncos are not really welcome at the tip-top of the polls. Second, there's prevailing wisdom that Boise State does not have what it takes schedule-wise (thanks, New Mexico!) and competition-wise (Alabama, LSU, Oklahoma, and others are just too good) to pull off the national championship game berth.

Still, even with the odds in mind, a scoreboard-watcher would likely say: "Well, teams won't wind up ahead of the Broncos with two losses now, will they?" And therein lies the scoreboard-watcher's drug. There is always a chance that the teams you need to lose could very well lose. So why not root against them?

Here are the remaining schedules for Alabama, LSU, Oklahoma, Oklahoma State, and Stanford, with big games highlighted in bold.

You can root for multiple losses for each of these teams or you can take a sunnier approach: Root for Boise State. The Broncos will be guaranteed a BCS bowl if they win the rest of their games, and a BCS bowl - no matter who else loses across the country - would probably be as good as it's going to get anyway.

Tell me which side you fall on in the comments. 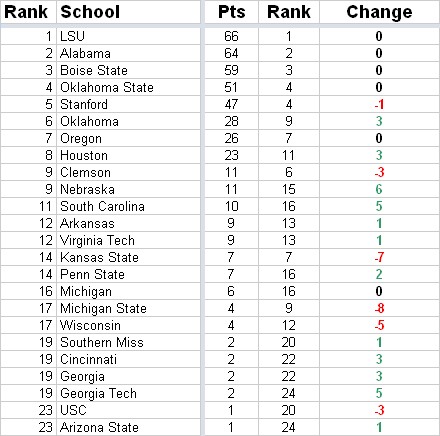 Not only do OBNUG voters love putting the Broncos higher than everyone else (BSU is No. 5 in all major polls), we also love putting fellow non-BCS teams way higher than others. Houston, the large-and-in-charge member of the CUSA, moves three spots up to No. 8 in this week's blogpoll on the strength of a blowout win over what's-their-names. See? We aren't just being biased about our own non-AQ team. We are being biased about all non-AQ teams (Southern Miss is No. 18 according to OBNUG, and No. 24 or worse according to others).

How does the OBNUG poll look? Any teams that need to go up? Any that should go down? Share your thoughts in the comments.