Boise State is 7-0 and more than halfway through their 2011 campaign. So too are their large contingent of verbal commits.

Join me after the jump for stats galore to see how they're doing in their collective senior seasons.

We might want to start calling Fields "hair trigger" because he just keeps going off. Friday night against Eastwood, Fields rushed for 326 yards (on just 17 carries) and 4 TDs in a 42-9 win over Eastwood. Fields now has 2,098 yards on the season and 22 rushing TDs. Americas is 7-2 on the season and will finish off their league schedule with El Dorado next week. Oh, and he picked up an offer from Oregon too. Don't go towards the swoosh, Jack!

Klein Collins won their 4th straight game on Friday night, defeating Westfield 34-10. Shane had two rushes for 10 yards, and had 6 receptions for 97 yards in the win, and if the numbers are up-to-date, Rhodes has 1,045 all-purpose yards (rushing and receiving) and 15 TDs on the season. This does not factor in his special teams contributions, which by all accounts, have been huge as well. Klein Collins is 7-2 on the year and play Spring next weekend.

Cy Creek lost to Langham Creek 48-21 on Friday to continue their slide. Devan had 15 carries for 94 yards and 1 touchdown in the loss.

Summit blasted Bloomington on Friday night 63-0 and have improved to 7-1 on the season. Deayon rushed for 26 yards and a TD in the win, but more importantly, intercepted his 4th pass of the year, breaking the record for career INTs in the Inland Empire. Congratulations, Donte!

Loyola ground out a 14-3 win over Bishop Amat on Friday evening and moved to 7-1 on the year. Anderson, who injured his knee a few weeks ago, saw limited action in his first game back. He didn't play defense in the game while he tested out his knee, but provided a lift for Loyola on third-down receiving. Loyola plays Alemany next week.

Leland stayed undefeated on the year by defeating Independence in a shootout on Friday evening, but were once again without the services of Santini, who was injured in a hit-and-run bicycle accident a week and a half ago. Santini is nursing a broken nose, separated shoulder and facial injuries, but is confident he'll be back for a playoff run—a run that looks inevitable for the 8-0 Chargers.

Steele Canyon improved to 6-2 on the year after beating up West Hills on Friday evening, 41-7. Steele Canyon keeps the lousiest stats of any school I've ever come across, so I have no idea how James contributed. Hopefully, I'll be able to at least get James' stats when the season is over, but I'm not holding my breath.

Patti and his Dr. Phillips squad defeated Evans 35-15 on Thursday night to move to 8-1 on the season. Evans was handed their first loss of the season by Patti's Panthers. Patti wasn't uber sharp in the contest...completing just 12 of 28 passes...but the passes he hit were big ones and 3 went for scores and he finished with 186 passing yards on the night. Here's a nice blurb from his local paper:

Patti, who has thrown for 5,074 career yards, surpassed 5,000 on a vintage second quarter play. He escaped pressure by rolling left and lofted a pass back across the field to (Trey) Griffey, who laid out to make the 41-yard reception.

VC is now 9-0 on the season after stomping Ponderosa 50-0 on Friday. Pint registered 7 tackles in the win and now has (at least) 47 tackles on the year.

Klein defeated Tomball 34-26 last night and are now sitting at 4-5 on the year. Again, couldn't find stats from the contest, but did dig up a nice photo of Weaver from the game. Here he is taking down the Tomball QB in the 4th quarter of the contest: 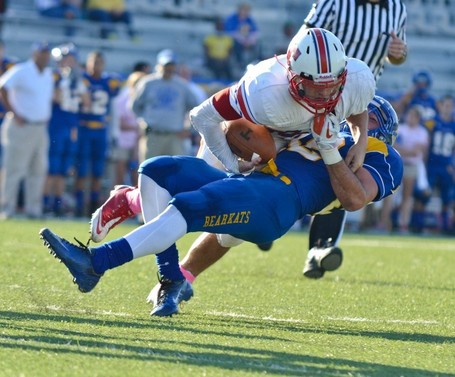 Nance's squad is now 8-1 on the year after a big 56-35 win over Klein Forest on Friday evening. No stats were logged for the big TE, who is primarily a blocking back. Dekaney wraps up their regular season next week against Westfield.

Servite is 7-1 on the season after defeating St. John Bosco 35-27. The Friars had two backs go over 100 yards in the contest...a testament to the good blocking of Averill and the O-line.

Martin is 8-1 on the year after defeating Weatherford 57-7 on Friday night. They'll finish up their regular season next weekend against Paschal.

That's it for this week...if you have any stats, info, or otherwise to report, I would greatly appreciate it. Just send HERE.