Top 25 analysis: Where should Boise State rank among the nation's best teams?

Share All sharing options for: Top 25 analysis: Where should Boise State rank among the nation's best teams?

Boise State is one of 14 undefeated teams remaining in college football, and they have been a Top Five staple since the season began. So it seems odd to be asking ... Should Boise State be ranked among the nation's best? Have the Broncos been playing like a Top Five team?

Question No. 1: Should Boise State be ranked among the nation's best teams?

I guess it depends how you determine the nation's best teams. At this point in the season, I think it's fair to assess the best teams in the country based on their results against quality competition. In the first five weeks, an upper class has developed. Those teams include:

You could put Oregon, Oklahoma State, and a few others in there, too. Does Boise State belong? Some might say no, based on the quality, Top 25 wins that the other schools have posted. But Boise State has played a tougher schedule than everyone else in the Top Ten except for Alabama and Clemson. It's just that BSU's marquee win happened a month ago, and their competition since then has lacked buzz (Nevada was the No. 24 team in the country according to Richard Billingsley).

If you take it a step further and go team-by-team with Boise State and its Top Ten cronies, I think you'll find flaws everywhere you look. There are some very good teams in college football this year. There are no perfect ones. Choosing Boise State as one of the very good ones is going to be a matter of personal opinion, and for the first time in a year-and-a-half, Bronco fans could go either way and be justified on both sides. Personally, I say they belong with their fellow Top Ten teams. They're just a lot closer to falling out of that group than we're used to.

Question No. 2: Have the Broncos been playing like a Top Five team?

Coach Pete would say no. I imagine most fans would, too. At least for me, I expect Top Five teams to play near-perfect football, and I don't think the Broncos have come close to that yet this season. For reference, a Top Five team plays like Boise State did last year. It's a harsh comparison to make, but there's not much room for coddling at the top. Boise State has eight games left to prove me wrong, and I think they are capable of doing so.

Part of the BCS's Computer Federation of ratings, the Colley Matrix boasts on its website to be bias-free ... and totally in bed with Michigan!

The Matrix's Top Ten is unlike any other Top Ten you will find, which could be either a good thing (look at how outside-the-box and bias-free it thinks) or a bad thing (corrupted data). You be the judge. Here is the CM's Top Ten through five weeks of football.

Pretty wacky stuff, considering that Colley's No. 2 team is America's No. 12 team, and Colley's No. 7 is everyone else's No. 1 or No. 2. I understand that computer rankings get better and better throughout the season as the sample size grows larger, so I don't fault the Matrix for marching to the beat of its own graphing calculator. We could all use a little polling levity. And there's this: Idaho is the fifth worst team in the country, according to the CM. Computer WIN! 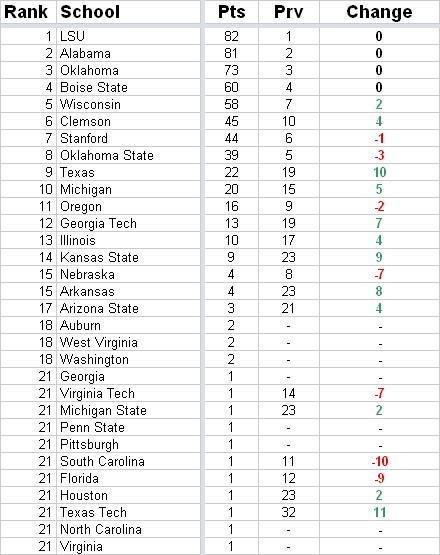 Others receiving votes: None

Wisconsin and Clemson gained ground on the Top Four teams in the OBNUG Poll, but nothing ended up changing at the top. That isn't to say that the OBNUG Poll is voting on straight party lines, though. Take a look at some of the votes below, and you may notice a schism between voters who feel Boise State is among the nation's best teams and those who think the Broncos are less so.

There are no wrong answers in this polling business, and you only get closer to an educated guess the more games that are played. So while Wisconsin and Clemson and Michigan look like world beaters now, we've all seen enough college football to know that there's no sense thinking you know anything until much later in the season, if ever.

That said, Look how bad Idaho is!

Abstained from voting due to washing their hair: Nate Peters, Rand McNalley, statguy, and greekpadre.

Let us know where we went wrong with the OBNUG Poll, and we'll get this thing as right as rain. Should someone be higher? Lower? What are your feelings on Boise State being one of the top teams in the country? Share your thoughts in the comments.