Kellen Moore had his worst statistical day as a Bronco on Saturday, throwing for fewer than 150 yards and completing just over half his throws. It was a performance that half of college football teams would take in a heartbeat, but for Bronco fans, it raised the question, "Gaa! What is going on here?"

Most have settled on Moore just having a bad day at work. Others, like Chris Fowler, think Moore's right knee is at fault. So what's really eating Kellen Moore? I have some theories after the jump, as well as analysis of every incompletion he threw on Saturday. Share your theories in the comments.

Kellen Moore is suffering from H1N1 of the knee, and other random theories

Here are some theories on what was wrong with Kellen Moore on Saturday. Feel free to share your thoughts in the comments and in the poll.

Kellen Moore had an off day. He's allowed to be human every once in a while. I guess. If he has to. And better that he was human against a Nevada team that never threatened than against an Air Force or TCU team that has the talent to take advantage of games like this.

Kellen Moore has a serious problem with his right knee. Moore overthrew a lot of receivers, which can be caused by a failure to step into throws. The leg he uses for stepping was wrapped in a knee brace for the second straight week

The Nevada defense came to play. The Wolf Pack did several things well on defense, including pressuring Moore and mixing up coverages.

Boise State's wide receivers let Moore down. There were three obvious drops and a few occasions where it seemed the Bronco receivers were not where Moore expected them. The Boise State offense requires a quarterback to throw to a spot and for a receiver to be there. If the Bronco wideouts weren't where they were supposed to be, that would explain a lot.

Whatever Marty Tadman says. Tadman, ever the Ron Jaworski of Boise State Twitterers, had some constructive criticisms during the game.

I am obligated by my love bond to Marty Tadman to agree with his analysis.

Here now is every single incompletion that Kellen Moore threw on Saturday with the reasons why, to the best of my knowledge, each pass was incomplete. Help me fill in the blanks if I left anything out.

No. 1: Incompletion to Tyler Shoemaker - Dropped

No. 2: Incompletion to Mitch Burroughs - Dropped

No. 3: Incompletion to Gabe Linehan - Overthrow

This incompletion would be the first of six in a row, almost all of which were on Moore. This one came on a 3rd and 1 from near midfield and really stopped BSU's momentum. Linehan also deserves some blame for not having elastic arms.

No. 4: Incompletion to Aaron Burks - Pass broken up by Nevada's Jeremiah Green

No. 5: Incompletion to Matt Miller - overthrow

On 3rd and 10, Nevada came with the blitz, and Moore's quick, deep throw to Miller sailed out of bounds. It could have been that Miller failed to adjust to the blitz with a comeback or slant route and Moore had to throw the ball away. Or it could have just been a bad throw.

This play will not be on his Heisman tape, for sure. It may have been the worst decision he's made in his Bronco career (best decision: breaking out the air guns versus Idaho).

Nevada DE Kaelin Burnett, a 225-pound lineman in the mold of Kharyee Marshall, worked his way around the pocket to grab Moore as he stepped up. It seemed like Moore thought he had stepped up far enough, and he maybe miscalculated Burnett's speed and reach. Nevertheless, once he was in Burnett's grasp, Moore should never have thrown that ball, and you, me, Moore, Moore's in-laws, and the guy sitting behind you who hates it every time you stand up knew it. 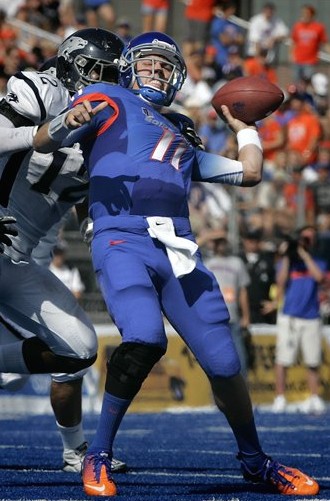 No. 7: Incompletion to Doug Martin

Help me out with this one. I seem to remember a pass thrown just out of Martin's reach that bounced off his hands. Did I dream that? And if so, why doesn't Doug Martin catch passes in my dreams?

No. 8: Incompletion to Doug Martin - pass broken up by Nevada's Brett Roy

This marked the end of Moore's six straight incompletions. 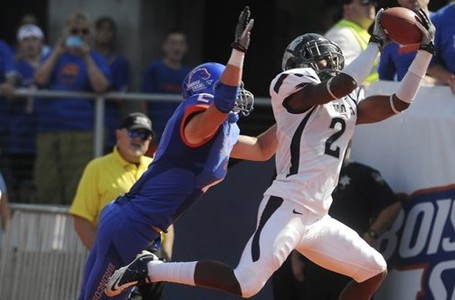 This wasn't a bad decision by Moore. Miller was in single coverage on Nevada corner Khalid Wooten, and I have no problem with Moore giving Miller a chance in one-on-one. The problem was that Wooten had inside leverage on Miller (meaning that Wooten had his body between the ball and Miller), so the throw needed to be outside rather than inside.

I guess Miller could have done more to break up this pass, like maybe pull Wooten to the ground, but as you can see in the above picture, Miller did make an attempt. He doesn't play corner for a reason.

No. 10: Incompletion to Kyle Efaw - overthrow

This was one of Moore's worst throws of the day in my opinion because it was also one of the easiest. Efaw was wide open in the back of the end zone, and it is a pass that Moore hits nine times out of ten. I imagine he was trying to float it over a defender and just floated it too much. Either that or he saw KBOI news kid Troy Oppie in the back of the end zone and wanted to pull a goof.

I'm leaning toward miscommunication on this one. You'll remember this play as the one where Linehan was wide open and the pass was a good five yards over his head. Moore was visibly confused / frustrated with Linehan, so I get the impression that Linehan wasn't where he was supposed to be. On long, arcing throws like this, Moore is releasing the ball before Linehan is finished with his route, and his route didn't seem to be the same one Moore expected.

Play-by-play does not list the intended target on this one, and my memory fails me. Intern, fetch my ginkgo.

No need to relive this one any more.

No. 14: Incompletion to Matt Miller

There is Kellen Moore's day in a nutshell. When you add it up, over one-third of his incompletions were either drops or good plays by Nevada. Only one of his interceptions was a poor throw (the other was the result of being heaved to the ground in the process of the throw).

So really, Moore's numbers could have been a lot better if just a few breaks had gone his way and a certain INT was never thrown. Instead of this:

... Moore could have had this:

Obviously, Moore's throws were off on Saturday more often than they have been at any other time in his career. But it is no reason to panic. See how things go on Friday against a Fresno State pass defense that ranks 46th in the country, and then we can talk again. 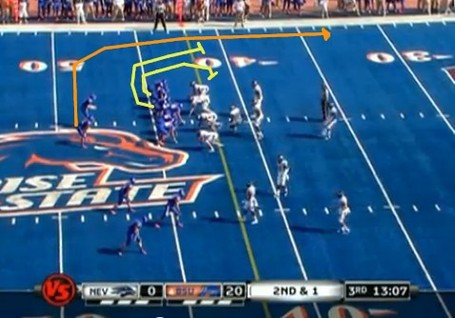 What are your theories about Kellen Moore's passing day? Anything to be worried about? Think he'll bounce back next week against Fresno? Share your thoughts in the comments.