Share All sharing options for: Boise State playbook: The Air Force fake punt that almost was

A turning point in Saturday's game against Air Force was the Falcons' decision to try a fake punt from their own 31-yard line to their hilarious demise. I literally found myself half-cheering, half-laughing at the absurdity of a decision gone so horribly awry.

But you know what? I was a lot closer to stunned silence and a single tear than I realized. Air Force's fake punt very nearly worked, and I have the play art to prove it. Join me after the jump for a breakdown of the key play and the surprise key player who made it happen for the Broncos.

The fake punt of infamy 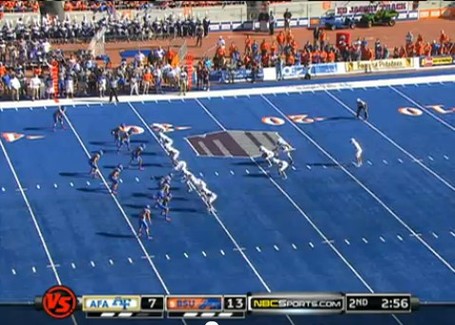 Above, you'll notice the presnap set-up for Air Force's fake punt attempt. The Falcons were facing a 4th and 4 from their own 31-yard line with three minutes left in the half and trailing by six. A fake punt call in this situation is a bold and fairly unnecessary decision, especially since the Boise State punt return team audibled into a "safe" (read: watch for the fake punt, you guys) formation.

You can see the Bronco defenders are evenly dispersed at the line of scrimmage and at the first-down sticks, which is a departure from typical return formations where everyone is on the line. The Broncos are looking for a fake all the way.

So what happens when Air Force goes ahead with its poorly veiled fake punt attempt? The thing works like a charm. 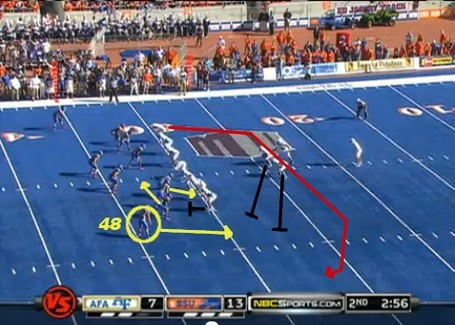 The ball is snapped back to punter David Baska who begins a rollout to his right, and his blockers follow suit by blocking as if the play is going that way. Just kidding! Baska tosses the ball forward to wideout MIkel Hunter who runs an end around the other direction. He has two lead blockers paving the way.

In the diagram above, I've scribbled how the three defenders to the play side react. The inside guy, true freshman Corey Bell, takes a hard upfield rush, blocked to the inside by an Air Forcer. The second guy, an unidentifiable Boise State player, begins a dead sprint the wrong way. The third, J.C. Percy (No. 48), stays home on the backside because he has contain - it's his job to make sure no one gets outside him. 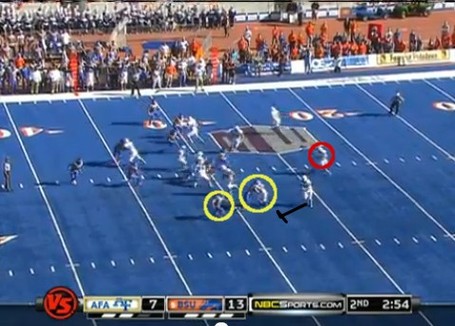 So at this point, the play is going about as well as Air Force could have hoped. The Broncos bit on the punter's fake, some random defender is about 15 yards out of position, and the play is blocked well for a big gain. The two yellow circles are the two Boise State defenders, Bell and Percy. They're the only guys left who can make a play, and Bell is engaged with a blocker and Percy is about to be. 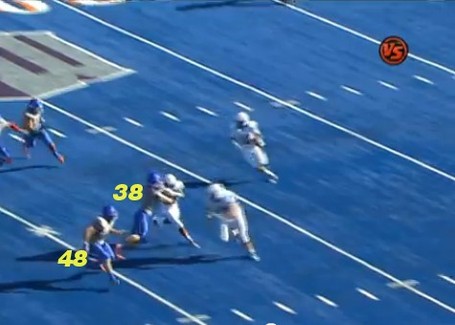 At this point, Mikel Hunter should have the edge, but the play of Bell (No. 38) forces Hunter to think twice. Remember, Bell took a hard angle upfield and was blocked inside at the snap. The man blocking him (an Air Force jersey number in the twenties, so probably a skill player) had leverage. Bell fought back through the block, drove the blocker to the outside, and pushed his man upfield. Instead of trying for the corner where it looked like Bell was headed, Hunter figured he might have a better chance cutting inside.

Even on the cutback, Bell made a play. He was so thoroughly in control of his blocker that he could have taken him any way he chose. When Hunter did cut back, Bell threw himself and the blocker right in Hunter's path, Hunter tried and failed on a cut back to the outside, and J.C. Percy was there to force the fumble.

The fake punt begins at the 1:12 mark of the below video, and keep an eye on Corey Bell to see some terrific football. 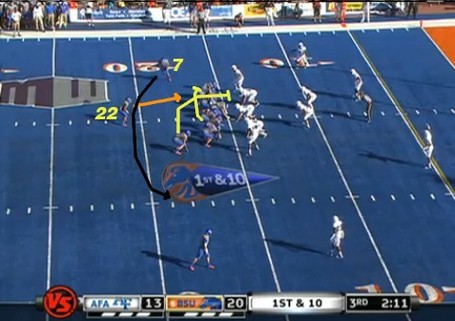 With two players pulling to the inside, I'm not sure Martin even had a choice on this play. It may have been a Doug Martin dive all the way.

What did you think of the fake punt attempt? Glad to see Corey Bell making an impact? Any new formations or plays you noticed? Any questions on Bronco strategy? Share your thoughts in the comments.