For the first time ever, Boise State actually went up in the BCS rankings this week. What sort of wizardry was this? No one's really sure, but you can guarantee that the BCS won't let it happen again.

Also doing his best to make sure it never happens again is Craig James, voice of irrational people everywhere. James turned in a ballot that had Boise State at No. 10, a full three spots worse than the next lowest voter who had the Broncos at No. 7. As you might imagine, James's rationale for doing so was equal parts ignorant and inane. At least he's dependable.

I did not watch ESPN's BCS countdown show, but I imagine it went a little something like this. 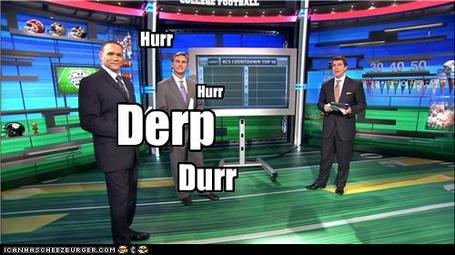 Chadd Cripe and Brian Murphy did watch the program, and their Tweets pretty much confirmed what I thought.

(Now would be a good time to point out that James has Stanford at No. 3, seven full spots higher than Boise State.)

I'm not sure what else can be added to the James discussion. He is a buffoon who gets paid to have an opinion - any opinion - just so long as he makes the opinion loud and, when pressed for clarification, louder. Television is no place for rational debate, which makes it a perfect place for James. He can say he voted Stanford No. 3 because the Stanford kids study so hard (by that reasoning, shouldn't Army, Navy, and Air Force be 1, 2, and 3?), and Rece Davis won't have the airtime or the monosyllabic words to explain why that makes no sense.

Craig James will continue being Craig James for the rest of the year. I suggest turning your TVs elsewhere and focusing your energy on the real crime here: That his vote counts in a poll.

ESPN's reaction to the BCS standings

The Worldwide Leader responded by posting a video on YouTube titled "Is Boise State overrated?" Don't worry. The actual video is not nearly as inflammatory as the headline.

OBNUG voters have made it very clear that it is Alabama and LSU and then Boise State and then the undefeateds and then everyone else. There are clear lines of demarcation between the groups, so I'm curious to know: What's going to happen when LSU and Alabama play in two weeks?

A lot depends on how the game goes, but I know for my personal voting ballot I'm going to have a hard time assigning much blame to the loser of a game featuring my two top teams. You can learn more about the winner of this game than you can the loser, and that doesn't really help me in my balloting. If LSU loses by 40, how far do they drop? It's not like losing to Alabama changes seven weeks of domination of everyone else.

My conclusion: Making you tell me what to do. Hit the comments and let me know.

How can the OBNUG poll be improved? How far should Oklahoma and Wisconsin have dropped? Who's too high and who's too low? Share your thoughts in the comments.