In case you didn't see it during the game like me, Cripe tweeted about it yesterday. Glad to see the "doctor thing" is over and we can stop worrying about it for now.

CBS Sports has their reactions to the new BCS standings with an interesting selling point:

They're not Craig James or Skip Bayless! It's amazing the open disdain that other members of the media now have for Craig James. I really like it.

Schedule creates final four showdown...if the SEC and the Big XII are the only conferences eligible

This Philly writer doesn't seem to understand that the whole idea of a "final four" is that there are only four teams left that are playing. No worries about the ACC, PAC 12 or those other pesky teams.

I don't think I've read another article that I disagreed with more (Moore?) then this one on Kellen's chances for the Heisman. I'm glad this writer would vote for Kellen if he actually has a vote. But, give Kellen some more credit than just winning.

Coach Kinsey stopped by the OBNUG tailgate on Saturday

He also got a picture with Marty Tadman. Glad the Kinseys made it down and I hope to run into them at some point in the future.

Kyle Wilson nabs his first INT yesterday against the Chargers

Kyle has been seeing the field more and more this season and has finally got a pick. Good to see him getting comfortable with the speed of the game and contributing. ESPN has the video.

In what looked like a position to be absurdly talented and deep in the preseason, we are now very thin at running back. By my count, it's down to Martin, Harper and Wright and then Michael Atkinson? Now where is some wood that I can go knock on...

App announcement after the jump.

The SB Nation iPhone app, now with FanShots and team colors and comments and other things

If you've been enjoying the SB Nation iPhone app, get ready to enjoy it even more. Version 1.1 includes new features like FanPosts, team colors, in-app browsers, more commenting options - pretty much everything that the community requested, except for that Android phone thing. 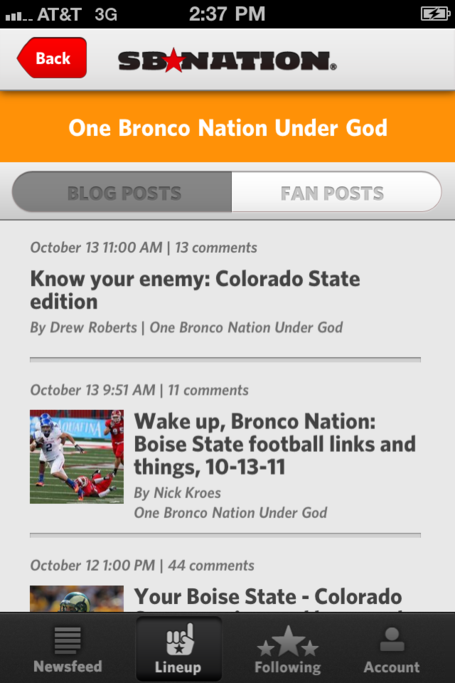 And here's a link where you can learn more and download.