A journey through time with Boise State's uniforms 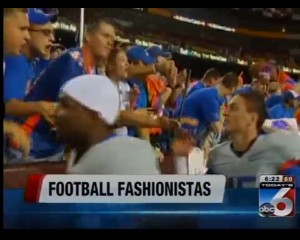 The local ABC affiliate runs through the Boise State wardrobe and looks ahead to a Saturday without all-blue uniforms. Also, new starting center Cory Yriarte said this:

"Eh, I'm ok with the grey," said Broncos center Corey Yriarte, who adds that he's ok with any uniform that is slimming to his girlish figure. "[It's important} how it fits on my arms, how it makes my stomach look."

KTVB must be beside themselves that they missed that story.

Courtesy of Boise State beat reporter Chadd Cripe, we now have statistical proof that Kellen Moore is the man and that he plays far less football than everyone else. First, the man part: Moore is completing 76 percent of his passes this year, which easily tops his previous career high of 71 percent. He would be completing 80 percent if you threw out the Nevada game. And now the less football part: Moore has sat on the bench for 87 minutes of game time, which is very nearly a full game-and-a-half.

Guess where placekicking ended up.

I can see the Statesman comment boards now: "We're paying $21 million to play football somewhere else and we can't afford to pay our teachers more than $30,000 a year?!?! Loosers!"

One of the seven, Stewart Mandel, has Boise State as a potential AP champion.

If my projected BCS lineup stands, Boise State will knock off LSU in the Sugar Bowl, causing a public outcry for AP voters to give the Broncos a share of the title.

"They don't have enough time to prepare for what we're going to show them," DeBerry said of the Broncos. "Yes, they had all week, but that's not long enough. That's an advantage for Air Force."