Boise State basketball preview: Getting to know the roster

Share All sharing options for: Boise State basketball preview: Getting to know the roster

Believe it or not, the Bronco basketball season begins in a couple weeks. Why basketball bothers happening during football season is beyond me, but it does. So let's put down our Air Force option manuals for a moment and spend some time with Leon Rice and gang. And then right back to the Air Force stuff.

Besides, we like Boise State basketball now, remember? Rice took the Broncos to the postseason last year, and this year's team gets to play a Mountain West schedule that will be leaps and bounds more exciting than forcing fistpumps through San Jose State games. So to preview the Bronco basketball team, I will be bringing you two posts: The first is a roster preview, the second is a schedule preview. There was a third post about fan excitement, but I got too distracted by Bronco football to write it. 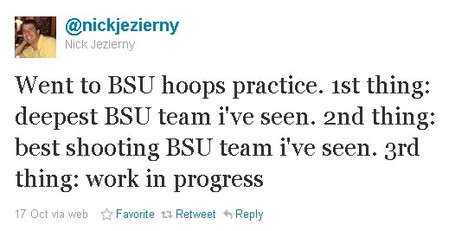 For those of us who remember last year's Boise State basketball team, the promise of a hot-shooting squad with depth is music to our ears. Our ears heard too many bricks being laid last season. Nick Jezierny's Twitter tease helps put to rest one of the biggest fears about the Bronco basketball team this season: Who are these guys? And are they any good?

There is no more La'Shard Anderson or Daequon Montreal or Robert Arnold. This year's team will be known for youth and inexperience and a real crapshoot figuring out who to put on the media guide. Oh, what's that? They chose to put no one on the cover. Fair enough. 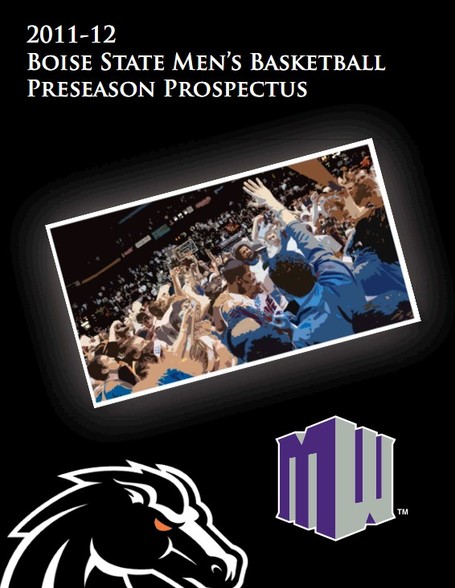 So to help this season feel less stranger-danger, I will run through the Bronco basketball roster for some introductions. Some players might look familiar. Others will be brand new Australians. Here we go.

Ryan Watkins - Sophomore forward, 6'9", 229 pounds, from California. Watkins is the future of the Bronco basketball team in a lot of ways. He is an inside post presence with a soft touch and great rebounding instincts. He is also young, which showed last season when he played and started as a true freshman but rarely lasted deep into games because of foul trouble or ineffectiveness. When Watkins is good, the Bronco inside-outside game flourishes. When Watkins is bad, the Broncos have no inside-outside game. I'm excited to see how he has progressed from his freshman season to his sophomore season. I want to see a Dream Shake.

Tre Nichols - Senior guard, 5'11", 176 pounds, from Texas. Nichols was a super sub last year, coming on to spell La'Shard Anderson or to play beside him. He can score when the mood strikes him (18 points against a good NMSU team last season), and he always brings an intense brand of defense. Fun fact: Nichols won Jerrell Gavin's dreadlocks in a bet.

Jeff Elorriaga - Sophomore guard, 6'2", 180 pounds, from Portland. Elorriaga came on late last season and was a catalyst for Boise State's late-season run. He didn't light up the scoreboard by any means, but he started 11 of the team's final 12 and made life much easier on fellow guard La'Shard Anderson. Elorriaga's game is from behind the arc. He made 31 shots last year and 28 of them were threes.

Thomas Bropleh - Sophomore forward, 6'5", 203 pounds, from Denver. Bropleh was a super sub for the Broncos last season and provided a rebounding boost off the bench. Watkins, Elorriaga, and Bropleh all played as true freshmen last season and figure to form the nucleus for Bronco teams for the next few years.

Westly Perryman - Senior guard, 6'2", 179 pounds, from Boston by way of Monroe College. Perryman could well be the team's defensive stopper this season now that Anderson is gone. Perryman was second on the team in steals. He lost his starting spot last year to Elorriaga midway through the season but continued to contribute in big spots throughout the rest of the year. You may recognize him as the guy who stole Billy Winn's haircut, as he has come to be known in and around Bronco Nation.

Kenny Buckner - Junior center, 6'7", 251 pounds, from Washington D.C., by way of College of Southern Idaho. Buckner spent the past two seasons in Twin Falls, plying his trade for the national champion Golden Eagles. He was named one of the top junior college prospects in the country by someone named Van Coleman, who I can only assume is the Dick Vitale of JCs. At 250 pounds, Buckner will be the biggest presence on the team and will most certainly be called the Round Mound of Rebound by some.

Jarrell Crayton - Sophomore forward, 6'7", 212 pounds, from Omaha, Nebraska, by way of Sheridan College. Crayton led his JC team in points and rebounds last season and was named to the first-team of the All-Region IX. I think All-Region IX just invited Navy as a football-only school, am I right?

Drew Wiley - Sophomore Junior guard, 6'7", 214 pounds, from Oregon by way of the University of Oregon. Wiley sat out for a redshirt year last season and figures to play a prominent role either as a starter or a sub this year. He appeared in 48 games for the Ducks in his two years there and shot lights-out from three-point range. Out of high school, he was the No. 21 small forward prospect in the nation. He remained small, so expect to see him at guard this year. 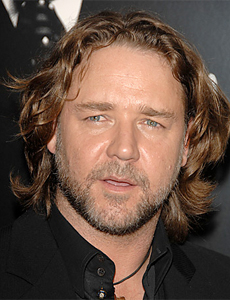 Anthony Drmic - Freshman guard/forward, 6'6", 196 pounds. In addition to being Australian, which is pretty cool, Drmic is also one of his country's best basketball players, as evidenced by his team-leading performance on the Under-19 team last summer. He averaged 23 points in 2011. Get your Australian nicknames ready, folks. Dibs on Dingo Drmic.

Igor Hadziomerovic - Freshman guard, 6'4", 202 pounds. Hadzo was a teammate of Drmic's on Australia's U19 team, and he wasn't far behind his Aussie mate (see what I did there?). Hadzo averaged 19 points on 52 percent shooting. Quick, back to the Australian nickname well.

Keep in mind that three true freshmen played last season, so you could see any one of these kids on the floor this year.

How do you feel about this year's Boise State basketball team? Do you have a favorite player? Is there someone you're anxious to see? Any reason why we should ever call Hadzo by his real name? Share your thoughts in the comments.