Top 25 analysis: Boise State has solved its strength of schedule argument (for now)

Share All sharing options for: Top 25 analysis: Boise State has solved its strength of schedule argument (for now)

And so our weekly poll discussion lacks a certain amount of drama and vitriol and anxiety as it has in years past. For instance, I am going to talk about strstaemcnalngth of schedule now, and I'm not going to get any death threats. Er, no more than usual. Fresno fans will be Fresno fans.

The Broncos have not completely solved the strength of schedule problem, not with so much Tulsa and UNLV on the schedule. But the argument that "Boise State doesn't play anyone" is significantly quieter and politer than in years past. It could be because the Broncos are not in the thick of the national championship conversation, rather on the fringe of it. Or it could be that the Broncos have improved their SoS this season.

I'll go political and say it's both (vote me for Canyon County comptroller!). Let's look at the numbers. According to Jeff Sagarin's strength of schedule ratings, here are how the Top Ten teams shake out.

Only three Top Ten teams have faced a tougher schedule than the Broncos. And for the most part (early conference games notwithstanding), these are the games that teams can control. Boise State is the No. 5 team in the land and deservedly so. The conference schedule is sure to soften that SoS significantly, but for the time being, it is hard to hold up Boise State's schedule and complain unless you do the same to the teams around them. A belated tip of the hat to Gene Bleymaier is in order.

Why does Jeff Sagarin hate Boise State so much? Oh. Never mind. 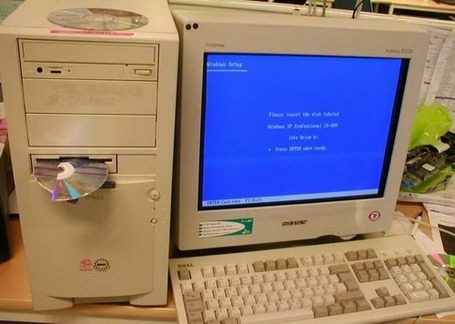 In the BCS computer rankings, the lowest score came from the Jeff Sagarin Computer Machine, ranking Boise State No. 8 when every other graphing calculator had them No. 6 or better (Kenneth Massey had the Broncos at No. 7 and the Kansas State Wildcats at No. 6, which I took as an obvious joke and therefore do not count).

What is Jeff Sagarin's deal?

Well, like most things in life, we can blame the BCS founding fathers. Sagarin has a more advanced, more precise ranking system that involves margin of victory, a detail that the BCS wants stricken from its algorithms. In Sagarin's real rankings, the Broncos are No. 5. In his rankings that are used to predict the outcome of future games, the Broncos are No. 3.

In fact, those predictor rankings have LSU and Alabama as the only teams better than the Broncos. Per Sagarin, Boise State would be a three-point underdog to both the Tigers and Tide at a neutral-site bowl game. Like, the Sugar Bowl for instance? /foreshadowing

Official worst poll of the week

I say check the Sun Belt. Louisiana-Lafayette is getting way too many votes. 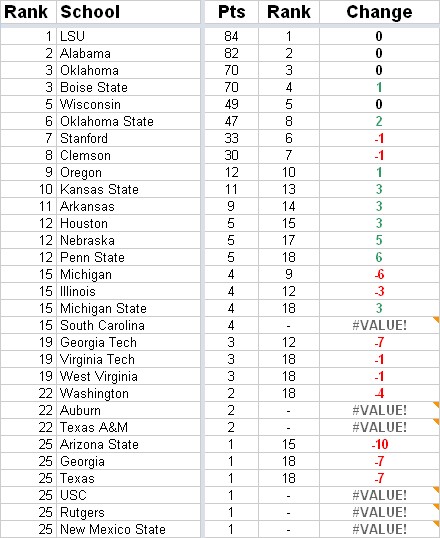 Watching every minute of every Boise State football game makes it very hard to fill out an unbiased poll. I see the Broncos improving from week to week and I naturally want to bump them up in the rankings. I see Oklahoma's score flash across my ESPN bottom line, and I can only imagine what's going on with the Sooners. Bob Stoops is usually yelling at someone in my imagination.

That is why I don't envy Boise State beat reporter Chadd Cripe when he fills out his AP ballot. How can you even begin to be objective when you have such an obvious information gap between the teams you are voting for? It's impossible, and it's just one more reason why we need a playoff.

Also, for those of you who are curious, New Mexico State got a vote this week because Noel.Diggity always votes for the teams that play and beat Idaho. I find this admirable.

What do you think of our Top 25 poll? See some ways that it can improve? Like, maybe putting Boise State at No. 1, for instance? Share your thoughts in the comments.