Top 25 analysis: Looking ahead to Boise State and the BCS

Share All sharing options for: Top 25 analysis: Looking ahead to Boise State and the BCS

The first BCS rankings of the year come out next week, and me without my pants already in a bunch!

According to BCS expert Brad Edwards, the Broncos will begin as the No. 5 team in the BCS rankings, which is more than high enough to get Boise State an automatic BCS bowl berth. To make it automatic, the Broncos must win the Mountain West and finish in the Top 12. To make the national championship game, the Broncos must play like Fresno is on the schedule every week and hope for some massive carnage with the teams around them. I'm going with the former and sleeping at nights.

Idaho Statesman columnistball Brian Murphy wrote a piece in the paper over the weekend, explaining just how boring Boise State's chase for a BCS bowl has become. And I think it's a great point. Sometimes when I think of the Broncos going to the Fiesta, Sugar, or Orange Bowl, I hear Joe Tessitore and Rod Gilmore in my head, talking about their fantasy picks. Here's some perspective, though, courtesy of Murphy's column:

For now, however, all we can do is fight the temptation to see it as mundane and commonplace and boring. And instead recognize this run, this era, all this winning, for what it is and has been - remarkable and amazing.

So with Boise State seemingly destined for a BCS bowl this season (do not smite me for my confidence, football gods), let's look at where the drama might come from on the road to BCS riches.

Poll of the week

Fashionably late to the poll party is the Harris Poll, which debuted its initial rankings this week. The Harris Top Nine is the exact same as the AP Poll Top Nine, so it looks like someone's been sharing answers. Fess up, old-timey Harris voters.

All things considered, the Harris was void of any nutso picks - a good thing since it counts for one-third of the BCS formula and a bad thing since I like making fun of the Harris Poll. Oh hey, look. Louisiana-Lafayette got two points. Ha! Doofuses. 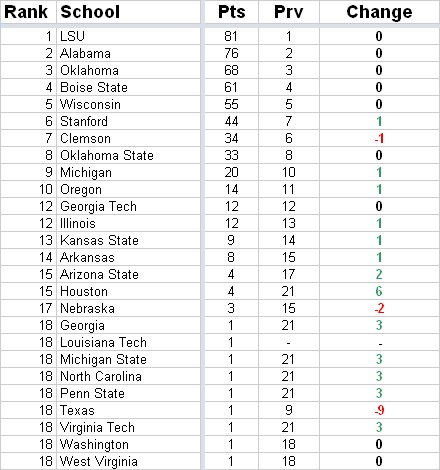 Others receiving votes: None

After seven weeks of college football, the OBNUG Poll has grown top-heavy, which is entirely by design. By awarding points to teams that deserve points (rather than filling a quota of 25), the cream will eventually rise to the top, and the curds of your North Carolinas and Washingtons will sink to the bottom.

LSU, Alabama, Oklahoma, Boise State, and Wisconsin are the clear-cut Top Five according to the OBNUG poll. Stanford is next, and Clemson and Oklahoma State below that, so in the Top Eight of the poll I feel like we have encapsulated all the teams that matter this year in college football. Nos. 9 through 25 matter a lot less.

Now, that isn't to say that a team can't join the Top Eight or fall from the Top Eight before the season is over. I'm sure it will happen (both joining and falling, most likely). But for now, the OBNUG Poll tells a story that I think many people are starting to discover this year in college football: There are a few great teams and the rest are just along for the ride. Postcript: Playoffs?

Abstained from voting due to washing their hair: Nate Peters, Rand McNalley, statguy, reflectivity, and greekpadre.

What did we do wrong in our poll this week? Who should be higher? Who should be lower? What kind of homers are we if we don't rank the Broncos No. 1 after a 50-point win? Share your thoughts in the comments.