Share All sharing options for: Boise State playbook: Anatomy of a blocked punt 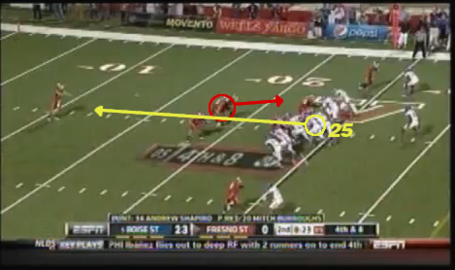 Friday night's Boise State - Fresno State game featured several game-changing plays almost all of which were at the expense of Fresno State. Hunter White's second-quarter blocked punt was one of them. Let's relive that play in exhaustive detail.

After the jump, I'll take you through the X's and O's of the punt block and discuss other random bits of strategy as well. Feel free to share your thoughts in the comments.

The Hunter White block of destiny

White's blocked punt showed how smart he is on special teams. He and senior linebacker Byron Hout had discussed all week a way they might be able to gain an edge through the middle of the Bulldogs' punt formation. On the sideline, they adjusted to what they were seeing.

"Me and Byron had been watching film all week, trying to time something up," White said. "It was just perfect timing."

Perfect timing and bad Fresno State special teams. An excellent concoction if you're a Bronco fan, like lingonberry juice and Sprite.

Fresno State uses the shield formation for its punts, which features three blockers lined up behind the five blockers at the line of scrimmage. Some people are vehemently opposed to this formation because it seems to fail more often than traditional punting. I am not one of those people, but I won't hold it against you if you are.

Boise State lined up seven guys at the line, which can be an indication that a punt block is on. When you set up for a return, you often put two blockers on the outside guys (the gunners) so they can't get downfield as fast. 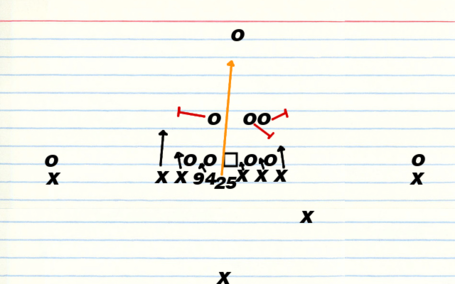 Like Cripe mentioned above, Byron Hout (94) and Hunter White (25) were scheming this all week. At the snap, Hout drove into the guard to the right of the longsnapper. The snapper picked up the Bronco on the other side of White (Blake Renaud, I believe). This left a huge hole for White to break through untouched. Credit Hout for his hard move to the outside shoulder of his blocker and for maybe grabbing the blocker just a bit and pulling him out of the hole, opening a door to the punter like a gentleman opens a door for a lady.

Still, Fresno State could have and should have picked up White. The middle blocker on the shield, let's call him Schmitty, paused for a moment at the snap, checked the right side of the Bronco rush formation for pressure, didn't see any, and took off downfield. Schmitty touched no one and was completely unaware of White running full speed in a straight line toward the punter.

Here is a screengrab of the formation and Schmitty's error. View the video below for the live action punt block (3:11 mark), and apologies for the Eminem music.

And what did special teams coach Jeff Choate think of the whole thing? He was amused.

Got any questions about special teams strategy? See anything crazy cool in the Boise State - Fresno State game? Not sure if I used the word "longsnapper" correctly? Share your thoughts in the comments.