Share All sharing options for: Game balls for Boise State versus Fresno State

Boise State did that thing it does against Fresno State, stomping the Bulldogs for the second year in a row and putting together a complete game for the first time this season. And just when I was starting to temper my pregame predictions. Now what am I going to do?

After the jump, I hand out awards for the Bronco-Bulldog game, including some Hunter White recognition, some Pat Hill second-guessing, and plenty of praise for an all-around great Bronco performance. Feel free to hand out some awards of your own in the comments. 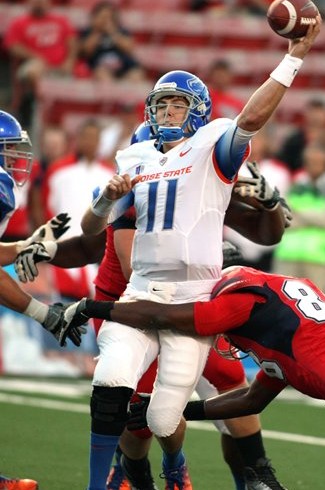 ESPN analysts Joe Tessitore and Rod Gilmore pointed out that Kellen Moore has put together a fine season's worth of stats in the 10 or so Friday night games he has played in his career. Friday night was no exception, as Moore threw for 254 yards and three scores - numbers that were limited by short fields, dropped TDs, and being up by 37 at halftime.

Not bad timing, either, as injury rumors swirled after Moore's average day the week before against Nevada. Safe to say his knee is fine and there is nothing like the smooth, aloe salve of the Fresno State secondary to heal your wounds.

With a first-half forced fumble and blocked punt, White helped turn the game from a comfortable Boise State lead to Blowout Town. The Broncos scored 14 points off White's plays, going up 16-0 after the fumble and making it 30-zip after the blocked punt (White's second in as many games). Not bad for a co-starter who has yet to start a game. Give that man a Hammer or something.

Tackle of the game

Midway through the first quarter, Fresno State was facing a 3rd and six from their own 10-yard line. The Fresno D had stopped the Broncos, the score was only 7-0, and the Bulldogs were looking for a play to spark the offense and get things on track. An out route to Devon Wylie seemed like a good idea, and it would have been if not for QEB blowing Wylie up one yard short of the first down. Fresno punted, Boise State scored on its next four possessions and Fresno fans fled for the exits.

Key to the game

The Bronco defense came to play, and the Fresno State offense came to be made an example of. I pity Colorado State this week.

The two combined for eight catches, 111 yards, and three scores (not counting Miller's one-hand snag that was called back), reminding people of the days of yore when Austin Pettis and Titus Young were running free through the Fresno secondary. Now if we can just find ourselves a Winky White, we'll be golden.

Someone has to take the blame for Fresno State laying a giant egg at home on national television in a game in which they were expected to at least hang within three scores. I blame Pat Hill. Who's with me? (Every Fresno fan raises their hand.)

Translation: "Game plan? I knew I was forgetting something!"

The most depressing scene from Friday night's game was the shot of Pat Hill gathering the whole Fresno team into a huddle on the sideline after Boise State's fourth or fifth or sixth touchdown (they all just kind of run together). No doubt he was trying to inspire his team to finish strong and believe in one another. But I think it was a little too late for rah-rah speeches. Inspiration doesn't win college football games, preparation does. Fresno State was not prepared. 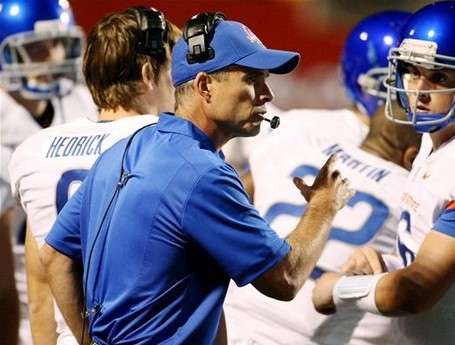 Coming into the game with a 27-yards-per-catch average, Saunders had one reception for one yard. Commence the gushing about Jamar Taylor and the Boise State secondary.

What players, plays, and performances do you think deserve game balls? How did Kellen Moore look to you? Who was your defensive MVP? Think you could coach the Bulldogs better than Pat Hill? Share your thoughts in the comments.