Last year at this time, the Boise State basketball team was two games into a seven game WAC losing streak to open conference play. They were the San Jose State football of WAC basketball. It was the worst.

Thank goodness for Leon Rice and his basketball wizardry. Rice has the Broncos at 2-0 in WAC play, on the verge of 10 wins, and playing in front of crowds numbering in the threes of thousands. This must have been what it felt like to be a UCLA fan in the early 1960s. Except with more Taco Bell signage.

To celebrate Boise State's success at the midseason, I offer my very non-expert breakdown of the Broncos for you to rip apart. Seriously, please rip it apart. I don't know much about basketball.

La'Shard Anderson is everything that Anthony Thomas was not - namely good at basketball. Thomas had a stinker of a senior year, and his poor play was a critical element of the Broncos' collapse. Not to take anything away from Greg Graham. He wasn't very good either.

As a Bizarro Thomas, Anderson has been the leader the Boise State team needs. He is second on the team in scoring with 13 points per game, he leads in assists and steals. His play sets the tone for the Broncos on defense. His decision-making helps the offense run smoothly. Somewhere - probably a 24-Hour Fitness - Chris Childs beams with pride.

The Aggies went Big Dancing last year and were seen by many as one of the WAC's elite teams in 2010-2011. So for the Broncos to pull out a win over NMSU was huge, and it sent a message to the rest of the WAC. That message: Hey, Boise State has a basketball team. (I'm not sure everyone knew that.)

For a visual aid, check out this chart of Boise State stats from StatSheet.com:

Or just check out this picture of Robert Arnold dunking over someone. 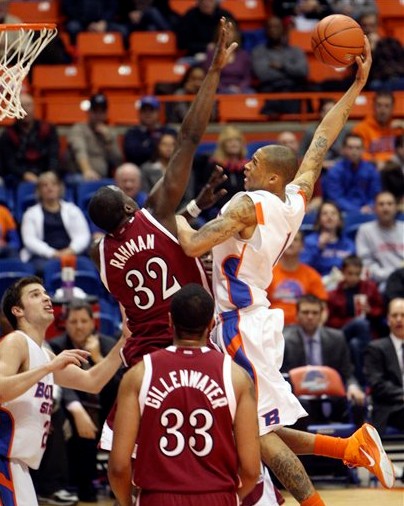 Boise State's smothering, pressure system has been a hallmark for this year's team and the difference in the majority of games the team has played. LaTech couldn't find the back of the net for the first 10 minutes. UC Davis is still having nightmares about contested jumpers. Boise State's defense should be good for another eight to 10 wins this season, which is exactly what I was going to write about the football team for 2011.

Boise State's nonconference schedule includes teams like Long Beach State and Texas Pan-American and a school whose actual mascot is the Roadrunners. Is it any wonder then that the Broncos' schedule was ranked 333rd in Division I-A? Thankfully, the schedule had nowhere to go but up, and BSU is now No. 180 in RPI. The WAC schedule cannot get here fast enough, and no, I never thought I would say that.

Who do you think is Boise State's player of the year to this point? Which Bronco game was your favorite? What are your thoughts on the team's offense and defense? Share your view in the comments.